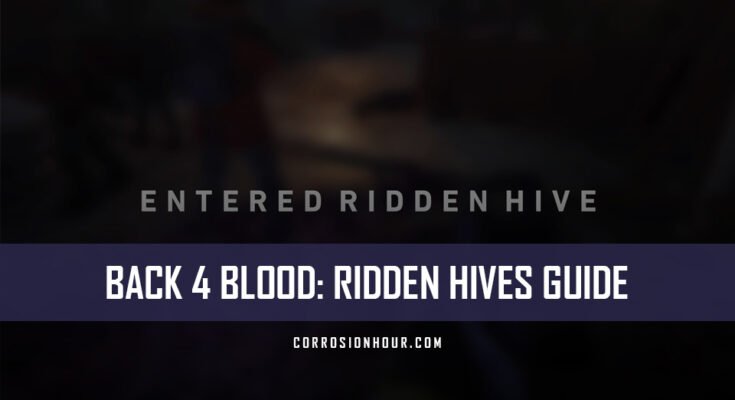 The horror genre has been around for a long time. It’s covered a lot of ground. From the introduction of Frankenstein by Mary Shelley to the gore-porn of The Hills Have Eyes and finally arriving at the supernatural scares of Hereditary. The horror we experience today stands on the shoulders of such giants. And the survival horror first-person shooter Back 4 Blood by Turtle Rock Studios is no different.

With multiple kinds of horror at its disposal—survival, body, sci-fi, man vs. nature, man vs. man. Back 4 Blood boldly strides down the gore-caked halls of hell that would make other titles balk. And nowhere in Back 4 Blood is the amalgamation of their different horror more prevalent than in the human melting pots known as Ridden Hives.

What are Ridden Hives?

Ridden Hives are essentially the breeding areas for ridden mutations. 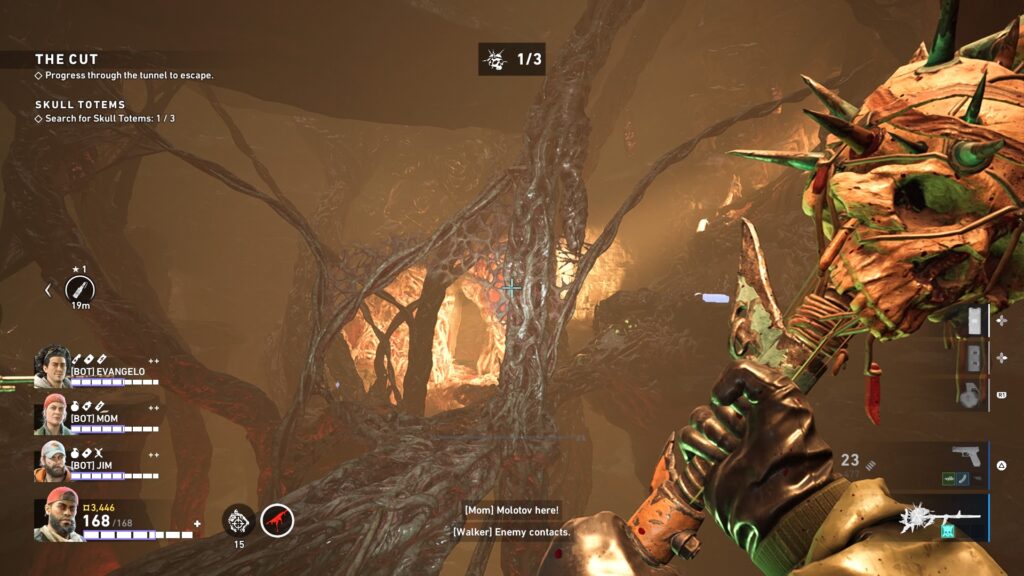 See, the zombie infection in B4B is caused by devil worms. Devil worms may or may not have come from outer space; we’re not sure. But we are sure they live in water, are sentient, and can’t live on their own for too long. They must find a host body to infect. But once they infect that host’s body, they can mutate it into all sorts of grotesque creations, as evidenced by the boomers, bruisers, and hawkers you encounter.

The story of B4B is sporadic and difficult to decipher, but if you’re paying attention throughout multiple playthroughs, you’ll undoubtedly pick up a few things. Like how these devil worms have been quiet of late. So quiet, the survivors thought the infection had almost entirely run its course.

What they didn’t know was that the devil worms had been buried underground.

The final act of B4B’s campaign sees players entering a massive network of underground tunnels that span an entire city. Tunnels dug and inhabited by devil worms and special Ridden. The Ridden Hives are similar to this final act, except they don’t all have massive abominations.

Ridden Hives are places where the devil worms have built a foundation for themselves. They’ve been down there for months, using humans to decorate their caves, taking their time to mutate as they see fit. They are collections of rotting bodies, organs, and flesh made into a living area for the devil worms.

To find Ridden Hives, play your B4B campaign as usual. But keep an eye out for glowing masses of flesh. They can spawn on almost any level and act as the entrance to Ridden Hives.

What you’ll find in a Ridden Hive

The enemies you’ll face will be stronger, and there will be more of them. Timed hordes are almost guaranteed, and we got Toxic Spill nearly every time we entered a Hive.

There are just two reasons for you to enter any Ridden Hive.

Skull Totems are a new form of currency in B4B. You’ll notice under the Supply Lines tab a section of cards, skins, and icons that can only be bought with Skull Totems. And you only get Skull Totems in Ridden Hives. 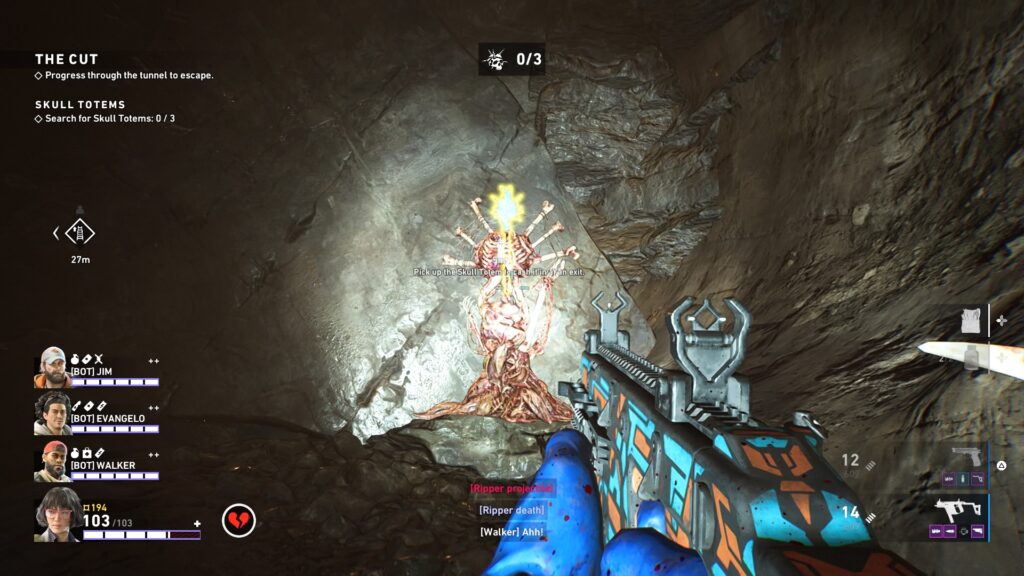 Skull Totem are baseball bats with skulls on them, and they can be used as melee weapons.

Legendary weapons are orange-colored weapons and attachments that pack a stronger punch than any other weapon in the game. They come with unique perks that make them feel more at home in a Dead Space title than in B4B. There’s the Tenderizer, which is a Warhammer that has explosive hammerheads. There’s the Nemesis, an AK Rifle that draws all ridden within 30 meters of the wielder. Or, our personal favorite, Pestilence, which debuffs enemies as you shoot them.

You can only find legendary weapons inside Ridden Hives, but you can remove them from the Hive. So if you find a Nemesis while going through a Hive, you will still have it equipped when you start the next normal level.

Because they tie back into the story. Somehow.

With each update, B4B reveals a little more about the post-apocalyptic world our survivors find themselves in. With the upcoming July update, B4B devs have been teasing a significant addition to B4B: cultists.

There are hints hidden throughout the Ridden Hives—the description under Skull Totems, the symbols on legendary crates, dialogue from Cleaners when they enter the Hive, “Hey, someone’s been down here. And recently. Now who’s crazy enough to come down here? … Aside from us, of course.” 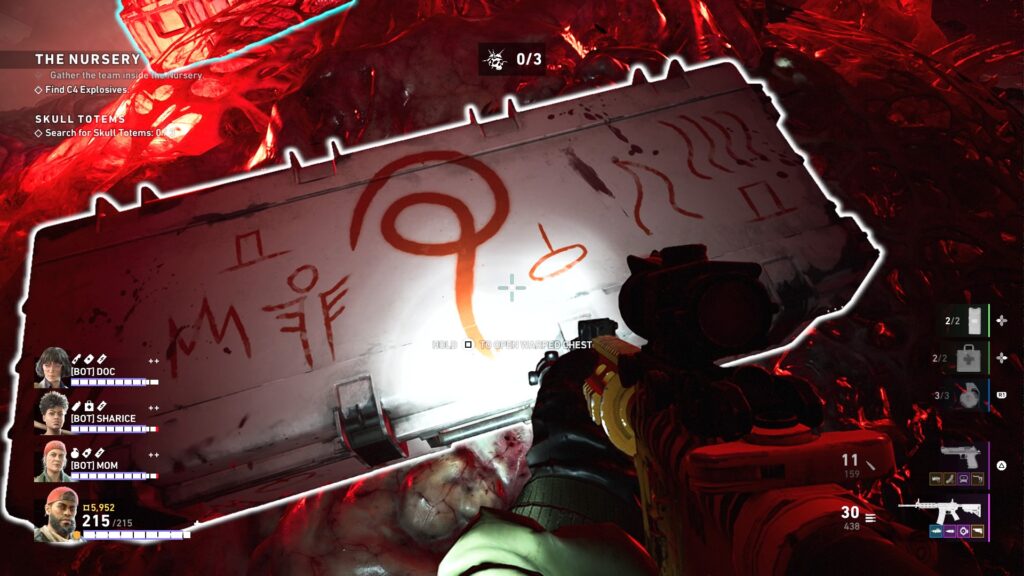 Ridden Hives aren’t just where devil worms go to breed and grow stronger. They may act as a kind of church for the Children of The Worm.

Right now, the survivors of B4B know as much as players do. We’ll have to wait for the July update to drop to learn more.

Hives always have three layers. Sometimes they have an inner hive, but that’s a whole different article right there.

Three levels. And you’ll know you’re descending to the next level because you’ll find a green flare and a yellow ladder leading down a cliff you can’t climb back up.

On each level is a single Skull Totem. So, if you’re aiming to collect as many Totems as possible, don’t descend to the next level until you’ve found the one on your current level.

At the end of the Hive, you’ll find a yellow ladder leading to the surface. Simply stand near it, and you’ll exit the Hive. Just ensure you’re holding your Skull Totems when you leave, or they won’t count. 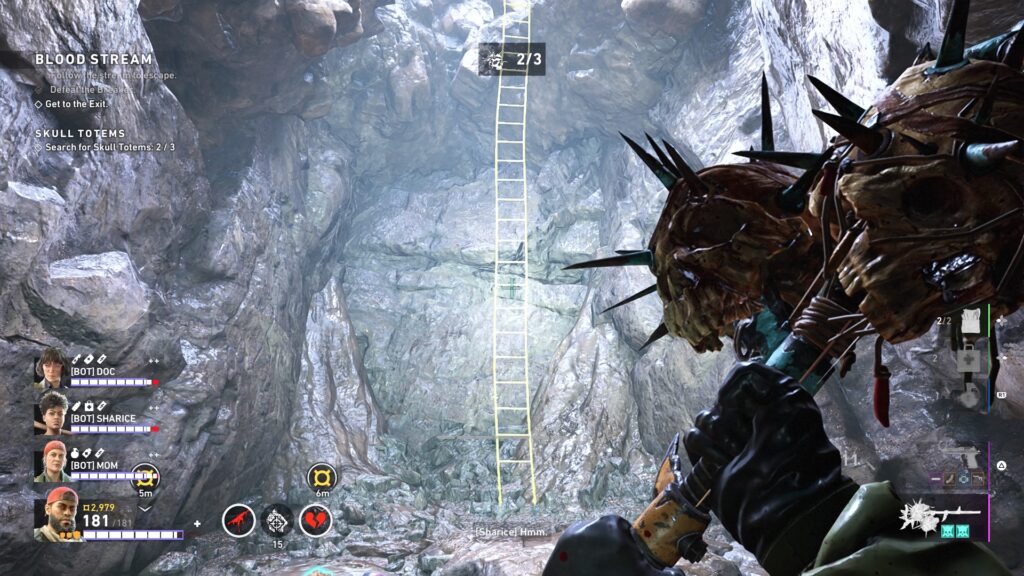 The biggest problem we had with Hives is that they’re confusing to navigate. The tunnels loop around and go in all directions and everywhere looks the same. It took us a few runs through the Hives before we started to get our bearings.

If you get lost, backtrack to the last green flare, you found and work from there. You’ll spend way more time in the Hive than you do on normal levels at first. But you’ll blow through them much quicker as you get more familiar.

It’s a good idea to bring a character with some melee capabilities into the Ridden Hives. Since you’ll carry that Skull Totem, which replaces your primary weapon, you’ll probably be bashing some ridden as you make your way to the exit. You might as well bring some cards or a character who will make the most of each swing. Sharice is our go-to Cleaner for this. Holly Forrester and Evangelo make excellent choices as well.

There are seven Ridden Hives to explore–five regular hives and two inner hives. The standard Hives all have three levels, three Skull Totems, and an exit. The inner Hives also have three skull totems, but they only have one level and usually end with a boss fight. 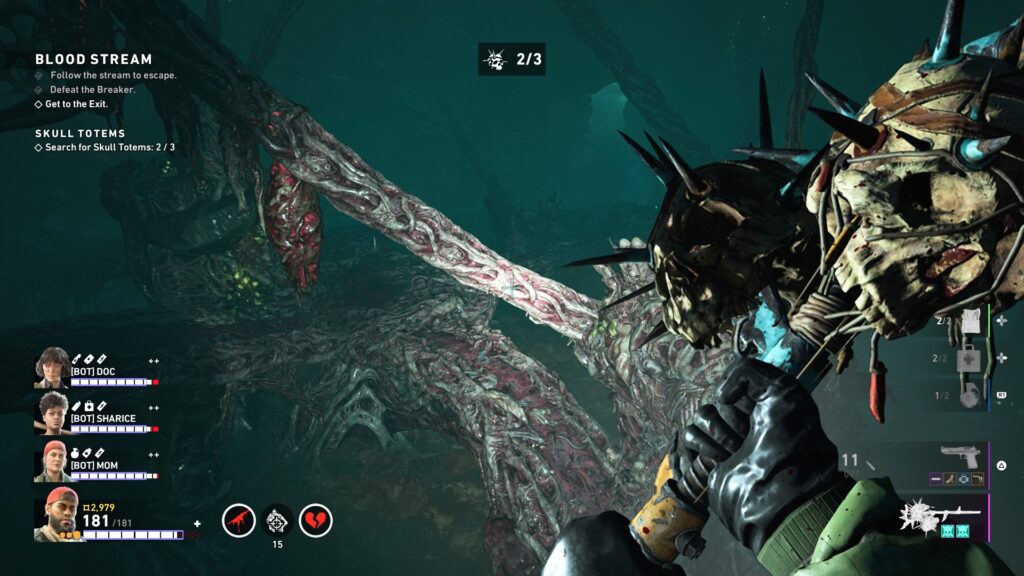 While the Ridden Hives are squarely locked behind a DLC paywall, we believe they’re an essential piece to Back 4 Blood’s gameplay and story. They also offer the strongest weapons in the game and a form of currency you can’t find anywhere else. Yes, they can be long and arduous, and getting only a few Totems for all your work doesn’t seem wholly reasonable. But, once you conquer a few Hives and get a feel for legendary weapons, you’ll dive down these horror holes more often than not. 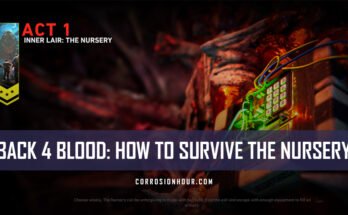