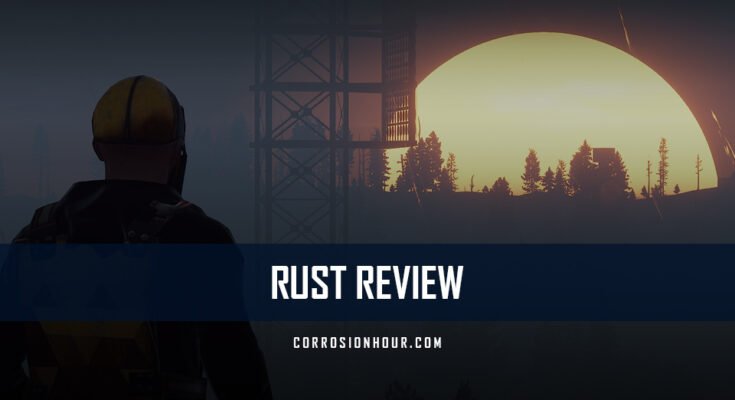 RUST has it all; survival, crafting, combat and toxicity.

RUST is an addictive title for the players who enjoy a highly social experience, and it has a reputation that most certainly precedes it. Many believe it is a game with a toxic player base, and that’s not entirely untrue. However, this toxicity is driven and exacerbated by the game’s excellent core mechanics, providing satisfaction and frustration equally.

Yes, the toxic naked people running around and causing trouble are frustrated. Hurt by their failures against the principles of RUST. The only thing left to do is be better than them.

The perceived toxicity of RUST players is a shallow pool of oil floating on the surface of a profound and engaging game experience—one which all fans of survival crafters must try at least once.

There is a lot of speculation online as to the setting and story of RUST. The mysterious Cobalt Industries’ rundown facilities around the map signify a company working towards rocket propulsion and immortality technology.

Immortality may have some limited bearing on player characters. However, unlike similar titles such as DayZ, where respawned players are explicitly new characters, RUST gives each player a character model generated on their persistent SteamID’s. One which players cannot change manually.

As it stands, the story has almost no impact on the game. We live, fight, and die in a world born of the outcomes of this intriguing mystery. So why do we wake up on the beach after death? Why are we always the same person?

We don’t know why we’re all in this nightmare of endless death and rebirth together; ultimately, it doesn’t matter. But, unfortunately, the scientist NPCs that visit the islands won’t help or speak to us and are hostile when approached.

And so the real story of RUST takes place between the players. Individually, grouped, or in clans, players will change each server’s social structure through a combination of tactics, skill, and luck.

Whoever controls certain areas will have greater control over essential resources. Where there is a vacuum, large groups or highly skilled players will inevitably move in to take control.

Every wipe, the islands experience a new story. Each features war, dominance, alliances, friendship, and betrayals.

During its development, RUST survived and flourished on sub-par graphics for quite some time. Finally, four years of open-beta gave way to its official release in 2018. The beta and release graphics changes were astounding and continue to be tweaked and optimized for each patch.

There is a great deal of attention to the details of flora and fauna. Grass became much more prolific and wooded areas much denser. Snowy mountains and frozen lakes became much crisper, while the desert soil hardened, becoming more barren.

Alongside a general increase in texture size and detail came a reworking of the generation of topographical geometry. Lumpy mountains took on a more detailed set of peak and ridge systems. The once static shoreline now features waves, foam, and froth.

Altogether, these improvements pushed the game towards visual realism and away from its cartoonish look during the early-access period.

Sound is an essential feature for player survival in RUST. As such, the soundtrack is relatively muted and unobtrusive when playing.

The soundscape of RUST is primarily one of threat identification. What is the scope of the threat? Can I hear one set of footsteps or many? Is that the NPC patrol helicopter or a player flying their minicopter?

In the dark of night, you often have no recourse but to rely on sound. Any source of light you have will illuminate you as much as it might reveal an enemy.

Can you hear booms rolling over the plains? Booms mean at least one of your neighbors has taken to raiding with explosives. Depending on what type of explosive you hear or how frequently you hear them, you might consider relocating before your base becomes a target.

Learning what each sound implies is essential for expanding one’s skill base.

Standard to most survival titles, RUST pits players against the elements. Therefore, staying warm, dry, well-fed, and watered is essential. All the while, you are putting your survival on the line whenever you leave the safety of home.

Players will come up against vicious animals, dangerous NPCs, and perhaps the most terrifying, other players throughout the islands.

The primary goal of any RUST wipe is to acquire and maintain loot. For most purposes, loot and strength are interchangeable. If you lock down a prolific mining area, you can afford to line your base walls with metal. Living near essential points of interest gives you gun components and other valuable tools.

You will spend most of your time gathering various loots, and their value is matched proportionally to the danger you find yourself in from other players. So why bother going out and doing all that work when you can just kill somebody who’s done the job for you?

Creating this tension is what RUST does most successfully. Players must always be aware of the direction that threats are likely to come. Understanding where your neighbors live and what they’re capable of is as important as weapon competency.

If you have smaller and weaker firearms, you’ll need to close the gap with stealth, surprising your enemy. As you move up through the weaponry tiers, you can afford to play a bit less cautiously. Your weapons will do more damage at range, affording you the ability to push the attack and choose the engagement.

Ultimately, knowing how to choose an engagement separates the highly successful players from those with ‘bad luck.’ The best guns in the game won’t save you if your enemy is a surgeon with a cheap double-barrel shotgun, and you step onto his killing floor.

Choosing engagements depends on decision-making through auditory and visual recognition of what your opponent carries. Gear serves to warn and entice players. If that person running over the hill has metal armor and an automatic rifle, they are both a threat and a worthwhile target.

One must continuously weigh risk versus reward. Not only in terms of what your opponent’s gear is but also in what you’re willing to take out of the base’s safety. Is it worth it putting your kit on the line to acquire more? Could you get the job down with lesser weapons?

Understanding this dark algebra takes time and experience but is a boon to developed players.

Between scavenging runs and fighting other players for loot, players will spend most of their time building and maintaining a base of operations. Boasting one of the most intuitive base design systems on the market, RUST stands out as a title that got the balance of simplicity and effectiveness right.

Modular pieces snap together based on which building component you have selected from a crafting menu while drawing resources from your inventory. While easy to learn and develop competence with, degrees of mastery permit players to build complicated bases to raid.

Utilizing different shapes, materials, and traps, a player’s base can become a labyrinth that threatens raiders, even when undefended. In addition, players can craft a veritable Fort Knox for their precious loot stash by learning the value of base designs and materials.

The flipside of this component of the game is base raiding. If you know some nearby players are efficient material farmers or have been lucky in combat, perhaps it’s worthwhile to simply ‘borrow’ from them.

Inevitably, explosions make a lot of noise. But if you’re making explosive sounds, that means you at the very least ‘have explosives.’ And may well have broken into a base ready for looting,  making you the ripest target on the map.

RUST maps wipe at varying intervals, and these settings are dependent on individual servers and their administrators’ preferences. You can find wipe cycles at various durations to fit your play style. However, the most common wipe cycles revolve around weekly, fortnightly, and monthly durations.

These are the favored periods for a wipe, and even then, wipes can vary on whether it’s a blueprint, map wipe, or complete server wipe. When this happens, all players return to square one, and the procedurally generated maps will regenerate an uncharted and brand new terrain to explore.

The wipe process lends RUST a great deal of replayability, as with each wipe, players may come and go from a server, changing the pace of the wipe for better or worse. It allows players to start fresh and check out different gameplay modes, along with modded servers, where the creativity is truly endless.

While there is a heavy leaning towards PVP-based servers, you can also find many PVE servers designed for role players and other various game modes.

There are numerous advanced systems in the game, such as gardening and electrical systems, where players can benefit from growing their own food or creating an infinite number of electrical circuits to help increase their base defense or add quality of life enhancements. There’s always something new to learn in RUST.

With Facepunch’s continuous development of RUST, there’s always something new being added to the game each month. RUST maintains a strong connection with its player base by producing new content, DLC, and skins. If that’s not enough for you, there are also thousands of vibrant RUST communities spread across the net, waiting for you to take part.

The only aim in RUST is to survive.

Without a doubt, RUST is one of the most successful survival crafters on the market to date. And with good cause. Facepunch consistently releases patches, including bug fixes and changes to gameplay aspects that improve a player’s experiences overall.

They are continually adding new elements to the game, such as complex electricity modules, new vehicles, mounts, seasonal game modes, and many cosmetics and custom items for players to purchase and use in-game.

RUST is an addictive title for the players who enjoy a social experience. While there are NPC threats, they do not unify against the players in a meaningful sense, so the setting and story of a wipe will often come down to how players interact.

So step into the fray, claim your plot, and defend it with your life. Then, when it all falls apart, you’ll find yourself naked, back on that beach, ready to begin again. 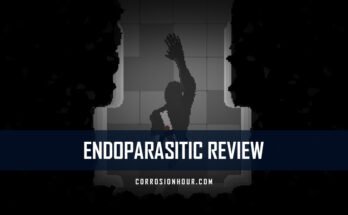 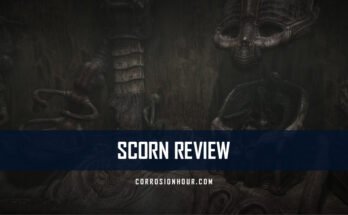 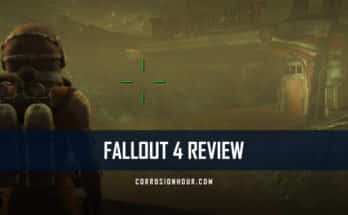