The official badasses of the Ridden apocalypse

In every horror story that exists, there are the survivalists, the warriors, and the fighters. The people who don’t give up just because the road got tough, the characters who fight against enemies and overwhelming odds. It’s Ethan Winters in Resident Evil Village, Issac Clarke in Dead Space, or Eric LeBlanc in The Forest.

In the first-person zombie shooter, Back 4 Blood, players take control of the only badasses left on earth, the Cleaners. Tasked with ensuring humanity’s survival by any means necessary, Cleaners are the elite soldiers of the apocalypse. When we say elite, you probably think body armor, special weapons, and high-quality combat training, don’t you? While some of the Cleaners do have combat experience, what defines Back 4 Blood Cleaners as elite is their ability to survive in situations others cannot—body armor and special weapons notwithstanding.

Who are the Cleaners? 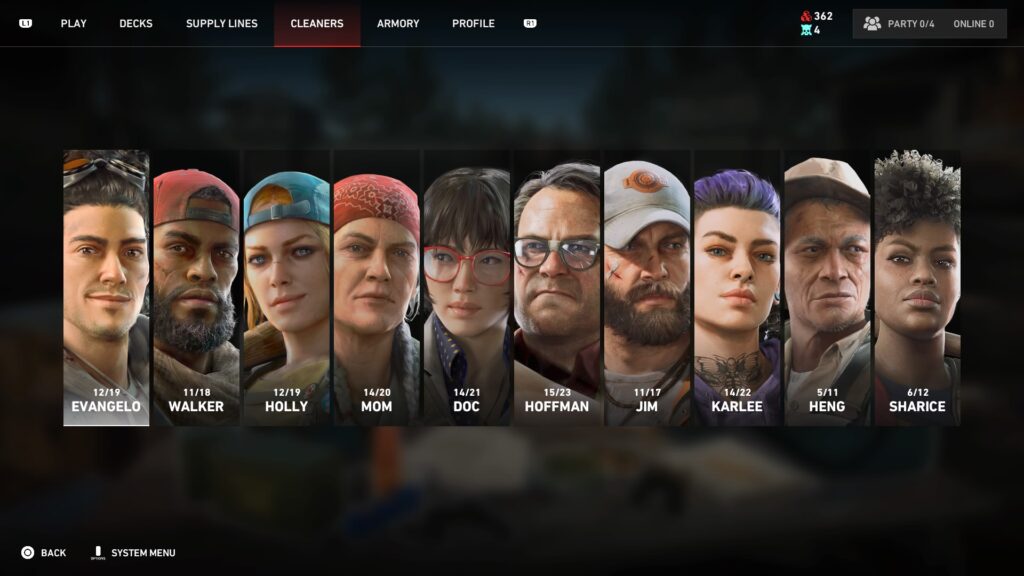 There are 10 Cleaners in Back 4 Blood:

However, to be accepted as a Cleaner, there are two criteria one must meet.

1. You must be immune to the devil worms.

By being immune to the devil worms, you aren’t someone who will get infected. You merely have to worry about the Ridden killing you. This is a hefty worry on its own, but having to worry about contracting the infection also would be the rotten cherry on top of that crap-sundae.

The devil worms breed in water, and players will find many messages throughout Back 4 Blood warning survivors to only drink bottled or boiled water.

Cleaners are immune to the devil worm, increasing their chances of survival in all areas. They’re able to sustain themselves out in the field longer. Whereas people not immune to the worms are at risk of turning into a Ridden every time they leave Fort Hope.

Just being immune is an excellent first step toward becoming a Cleaner, but many immune survivors lack experience with weapons. Like Josh, the medic who helps the Cleaners out in Act 2. Or Chenda, the KSC contact in Fort Hope. This leads us to the second criteria for Cleaners:

2. You must want to kill Ridden.

Josh and Chenda know they’re most useful at Fort Hope using their skills. Each Cleaner in Back 4 Blood has a grudge, a chip on their shoulder, or lots of anger to get out. And the best way for them to exercise their pent-up frustrations is by wiping as many abominations off the face of the earth as possible.

What is a Cleaner’s Job?

To protect survivors at any cost.

Throughout Back 4 Blood, Cleaners search for extra supplies, rescue survivors trapped in precarious situations, and kill lots of Ridden. They are the arm with which Fort Hope manipulates the outside world. If there’s something that needs investigating, if there is a Ridden Hive to clear, or if a contact outside of Evansburg needs a supply run, it’s a Cleaner crew who will see to it.

Yes, they are specialists at killing mutations and Ridden variations. But that’s not all they do.

Karlee is known to scout the area. She’s a solid lockpicker and reports what she finds to Commander Philips.

Jim can be seen in the background at the end of Act 2, implying he recently completed a supply run to Smithy in the Church.

Heng sets up supply chains from his restaurants so he can provide food to Fort Hope.

Sharice worked with Philips to improve the settlement’s barricades and fortifications.

You get the point.

They do whatever they must to keep humanity going strong.

And they kill every Ridden that gets in their way.

There are ten playable characters in Back 4 Blood. Each one comes with a unique perk and ability. When selecting the right Cleaner for the job, it’s best to pick a character that fits your playstyle and compliments your team’s composition. 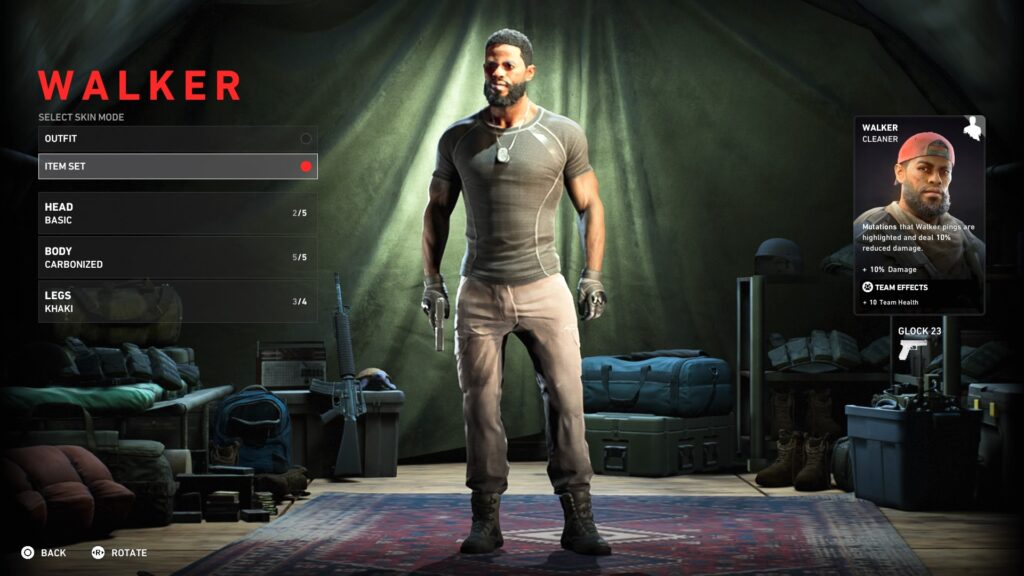 Elijah Walker is a former Army Ranger who was home on leave when society collapsed. Now, he’s the de facto leader of Fort Hope’s Cleaners and doing everything he can to keep people alive.

Walker’s perks are that he adds extra damage to himself and the team, and mutations he pings do less damage. Walker is a damage-dealing character, so if you want to go offense, he’s you’re Cleaner. 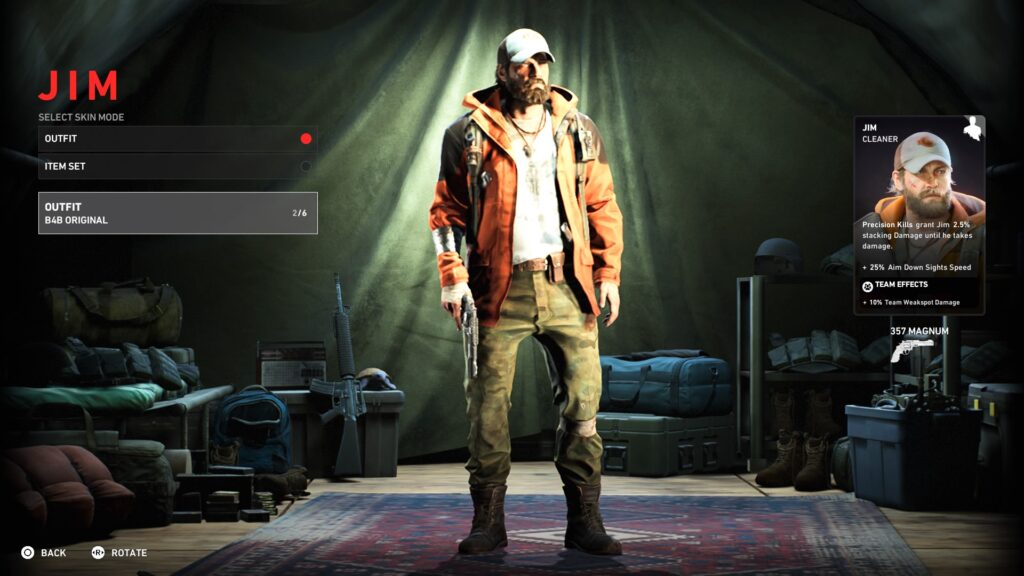 Jim Hossler is a countryman. Born and raised in the forests of Evansburg, he knows more about tracking and surviving out in the wild than most. But after the collapse, he lost his family, home, and life. Rebuilding was hard, but with his previous military experience and relentless determination, he knew his best bet was at Fort Hope.

Jim’s perks are extra weakspot damage, precision kills stack damage buffs, and he can aim down the sights quicker. Jim is our preferred offensive character. He does a lot of damage and keeps the team from dying too often. If you’re good with a sniper, you shouldn’t pick any other Cleaner. 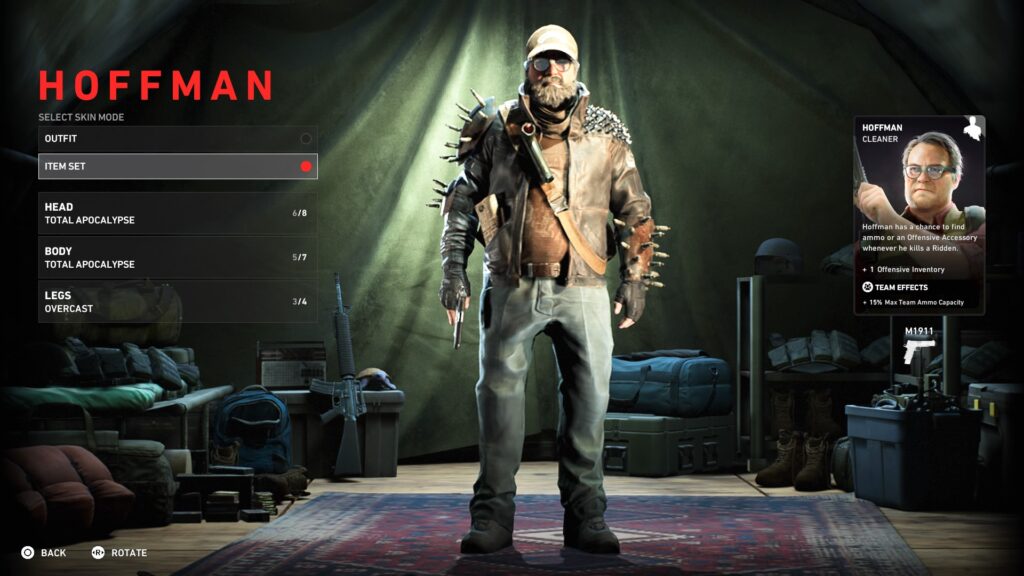 Hoffman is objectively one of the best Cleaners in the game thanks to his perk, the ability to spawn ammo or accessories with every Ridden he kills. He also lets the team carry more ammo. Hoffman is a good offensive/support Cleaner. Give him an LMG, buff his damage, and focus on the small fry. Your team will be just fine. 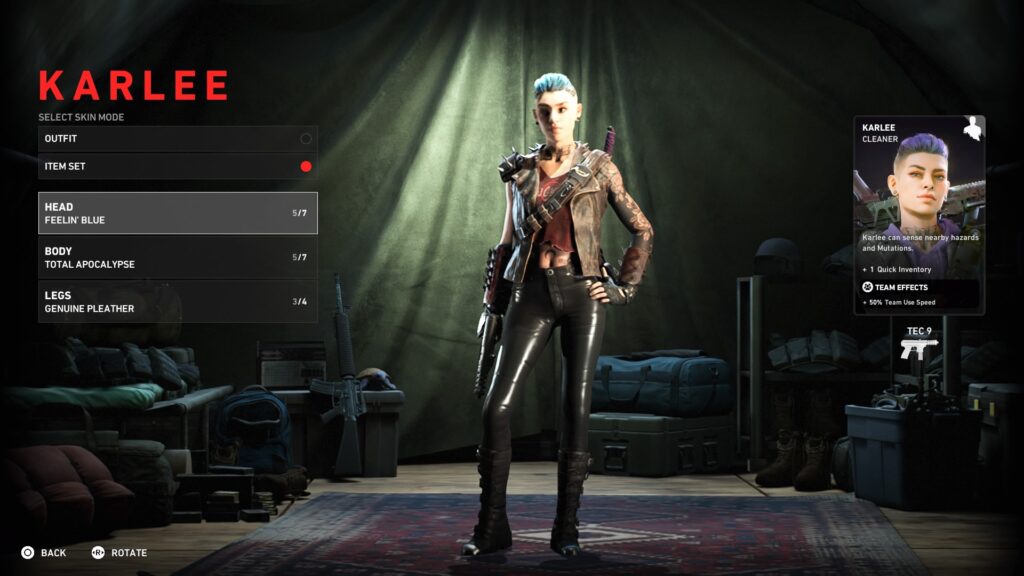 The Cleaner we chose the least, Karlee Fincher, is a punk rocker with a flair for solitude. Which is a polite way of saying she hates people. She spent most of the apocalypse outside Fort Hope, doing her own thing. But now that she’s officially joined the Cleaner crew, she’s here to stay.

Karlee has one of the only supernatural abilities in the game; she’s able to sense mutations, sleepers, and environmental hazards. Her detection range isn’t great, but it’s better than nothing. If you’re someone who’s all about collecting copper and striking off on your own, Karlee is the girl for you. 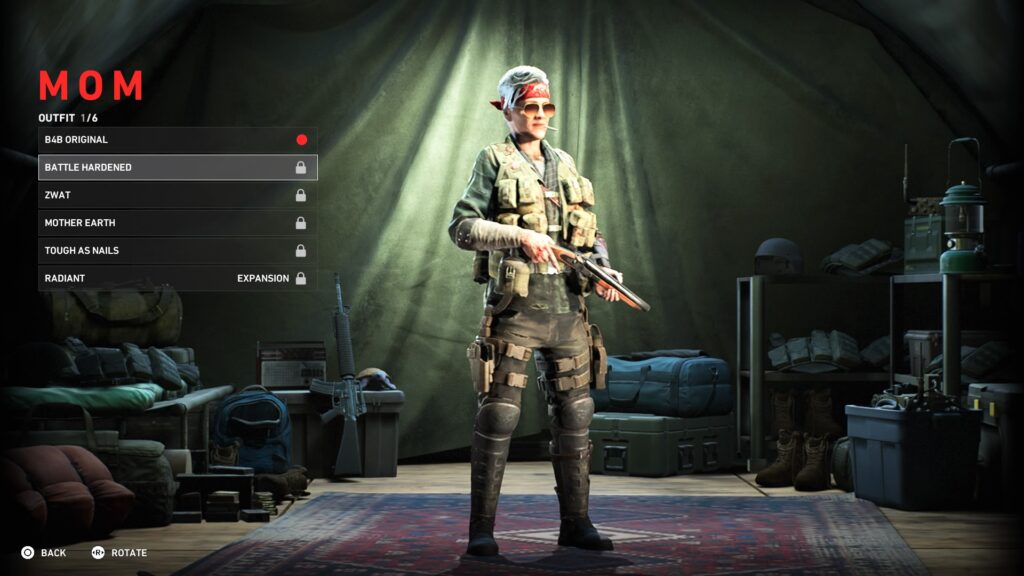 Mom is seen as the second in command of Fort Hope’s Cleaners. Her experience, grit, and silver tongue qualified her for the position. She owned a tattoo parlor before the collapse and lost her son shortly after. Now, with a small grudge against Philips, Mom is an iconic Cleaner.

Mom’s perks aren’t the best. She carries extra health, has extra revive speed, and her temporary health decays slower. Meh. But, if you build a support deck that focuses on team perks–Ammo For All, Saferoom Recovery, Group Therapy, Mandatory PT–Mom becomes a great Cleaner to have on the team. 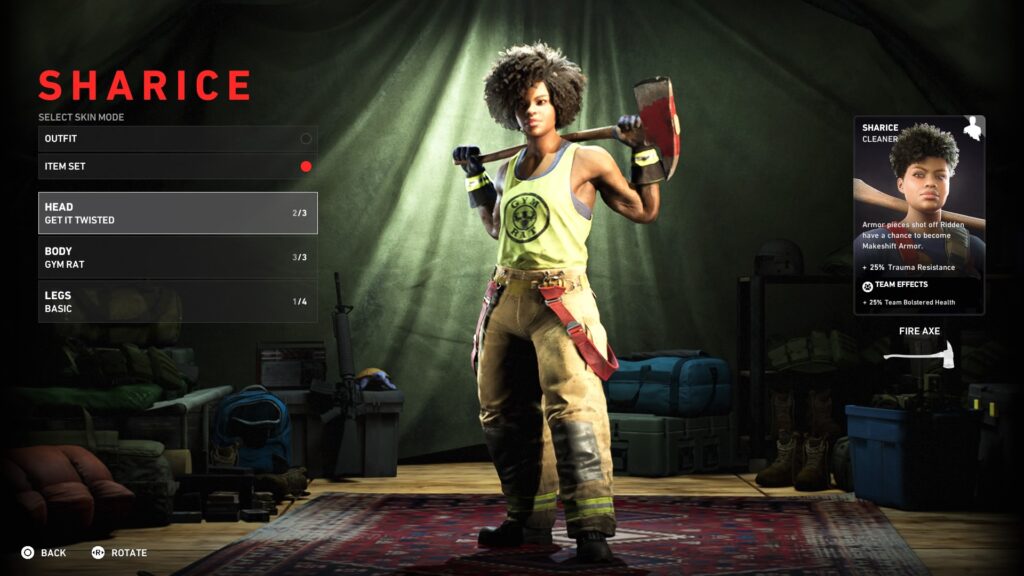 Sharice’s perks are awesome, and she is clearly a melee character to rival all melee characters. She can knock armor off Ridden to use herself and gets +25% trauma and armor resistance. Our favorite deck for her regenerated health and ammo for each kill. And after buffing her attack speed and melee power, she killed often. 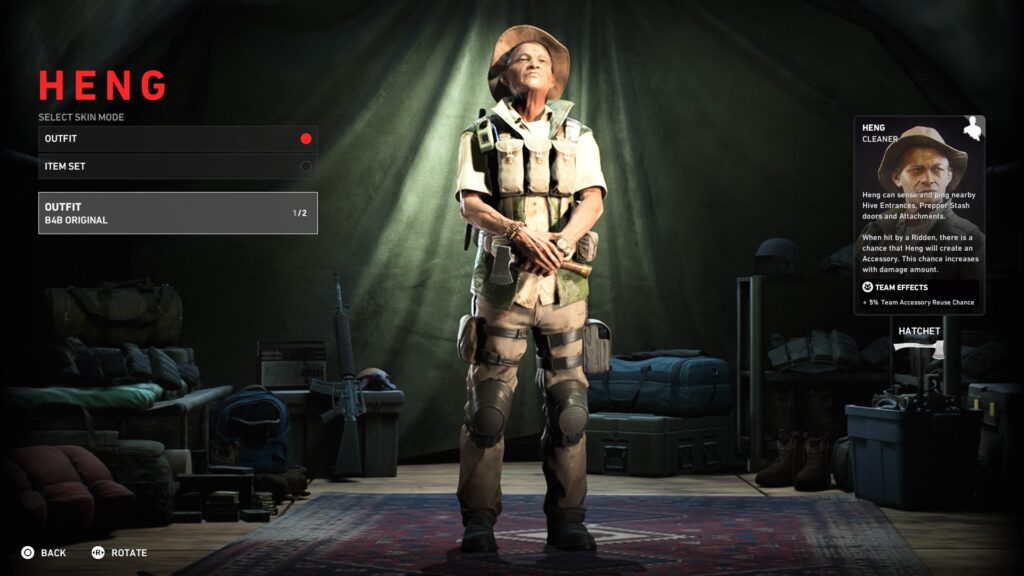 Heng came to America from Cambodia when he was very young. He only felt at home in America’s diners and restaurants and eventually worked his way to becoming a restauranteur himself. After the collapse, Heng worked to ensure people in the community were housed and fed, using his own restaurants to do so. After following a warped Ridden down into a Hive and seeing the horror below, he decided it was time to join the larger fight.

Heng starts with an RPK and a hatchet, and we think that’s all anyone needs. His perks allow him to generate accessories if he’s hit, and he has a slight chance to reuse accessories. He, like Karlee, also has supernatural abilities in that he can sense the entrance to Ridden Hives, along with attachments, stashes, and intel cards. Heng is an excellent middle-ground character, able to adapt to any situation that might come up. 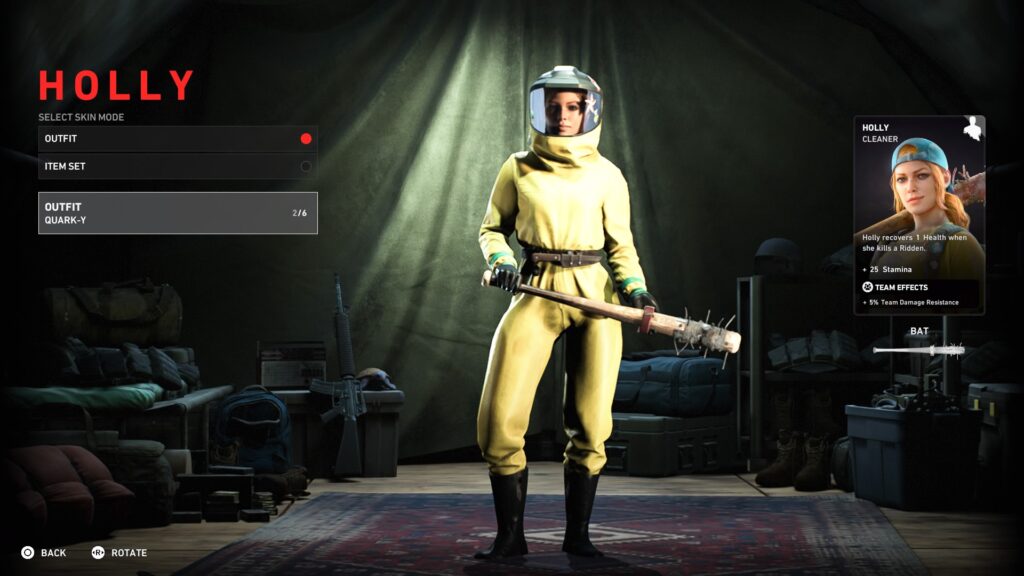 Holly Forrester was almost done with college when the world collapsed. Left to fend for herself in a world without family, fast food, or childhood friends, Holly picked up a baseball bat and didn’t look back. She joined the Cleaners of Fort Hope and has proven herself capable, positive, and motivational.

Her perks allow her to heal 1 health whenever she kills a Ridden, she has increased stamina, and she buffs the team’s damage resistance. Holly was the surefire melee character before her nerf, and she’s still a surefire melee character now. Buff her attack speed, damage, and damage resistance, and we see little reason ever to put her baseball bat down. 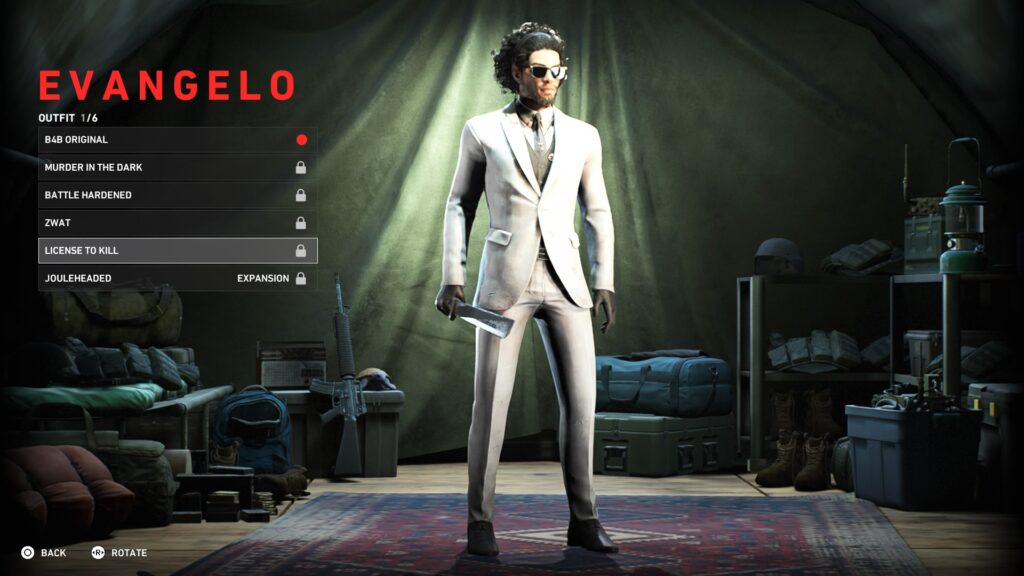 Evangelo is the youngest member of the Cleaners. He also lost most of his family in the collapse, and now he sees the Cleaners as his family. He is the most inspirational of the group and constantly tries to uplift everyone’s spirits.

He starts with a machete, can break out of enemy grabs, and can move faster than any other Cleaner. Many players use Evangelo if they want to cheese it through a level as quickly as possible. Gotta go fast! 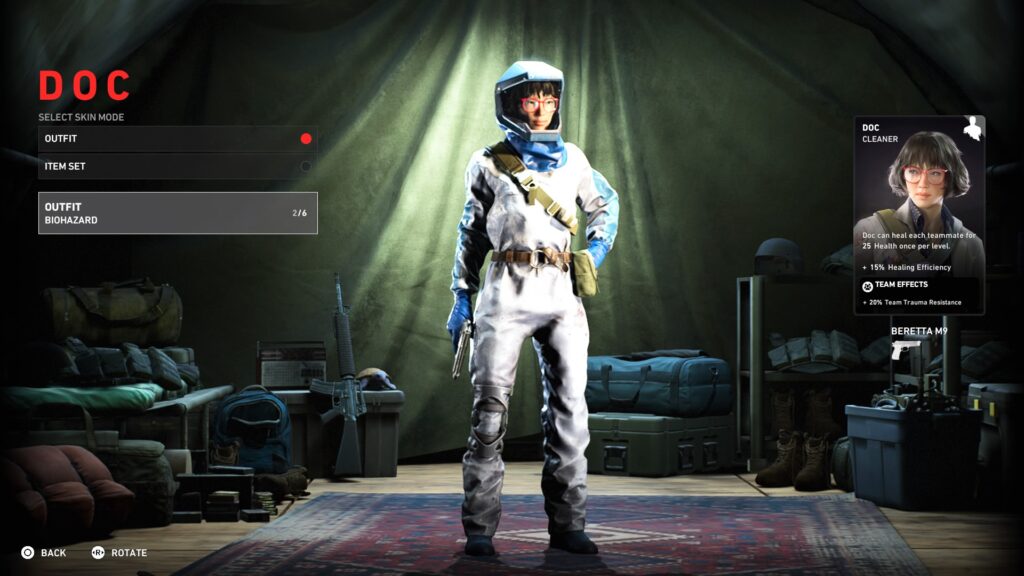 The designated healer of the group, Doc has been through a lot in life. She came to America for college, then settled in Evansburg Medical, dreaming of opening her own practice one day. Then the collapse. Now, she works with the Cleaners of Fort Hope.

She’s the best healer in the game, with one free heal per teammate, per level. She also has increased team trauma resistance and increased healing efficiency. We loved playing as Doc and found her only negative to be decreased damage output. But if you’re playing Doc correctly and keeping your team healthy, your team is outputting more than enough damage to clear the level.

Final thoughts on the Back 4 Blood Cleaners

Regardless of the Cleaner you choose, you’re playing as a hardened, reliable member of the new world. Each Cleaner carries trauma, and all are looking to get even with the Ridden in one way or another. But depending on your playstyle, one may be your go-to character over others.

The Cleaners of Back 4 Blood are what drive the story. There are few cutscenes throughout the campaign. Thus, players must rely on the dialogue between Cleaners to piece together what’s happening. Players will see the world through very different eyes depending on the Cleaners that make up a team. If you want to experience the full Back 4 Blood story, you’ll have to play through it as each Cleaner. 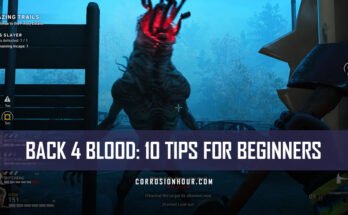 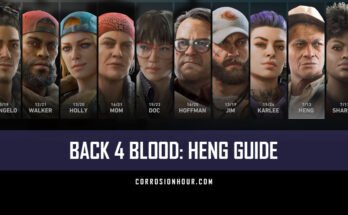 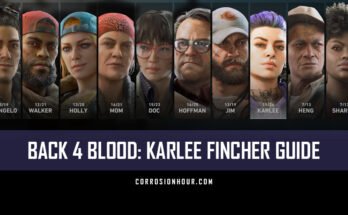