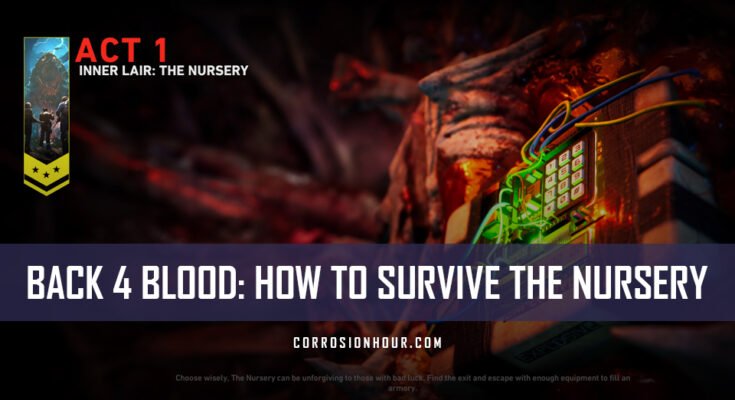 Learn how to survive The Nursery Ridden hive

Back 4 Blood is full of different levels for players to explore. Yes, those with a practiced eye might notice their team backtracking through some familiar levels more than once. But those areas lead to different places every time you encounter them.

The Nursery is one big boss fight. Or several small boss fights that all blend into a single chaotic encounter. However you look at it, the Nursery takes some planning to conquer. You’ll want to space yourself out throughout its different phases. But if you take your time and prepare for what lies ahead, the Nursery will be just another bad memory.

The Nursery is considered an inner Ridden hive, which means you can only access it from within another Ridden hive.

When you’re exploring a Ridden hive, be it 300 Below or Brood Lair, you may encounter a glowing red entrance to a Ridden hive. Entering that hive is the only way to access the Nursery.

The Nursery is the only Ridden hive with a preparation phase that extends out behind the saferoom. Grab whatever you need from the supply box, but don’t go crazy.

The Nursery provides several resource containers full of supplies for you to pillage. Rip apart the web that starts the level and depart. You’ll immediately come to a large chute that carries you down to the main attraction.

After sliding down, you’ll see the heart of the Nursery. Along the walls of the Nursery are several caves with protective webbing across them. To survive the Nursery and continue your campaign run, you’ll have to destroy each cave tunnel.

Before you begin, continue preparing for the onslaught. At the bottom of the chute should be a cluster of crates and chests. Warped chests, mods, and weapon crates are yours to explore. Take what you need and set valuable items to the side for later use.

There is already one protective webbing that’s been destroyed, and you can see the cave behind it. In the far right corner will be a body sticking out of the fleshy wall, and next to it, a backpack. Inside the backpack are the explosives you’re looking for.

You may have to rip apart the webbing that’s hiding the backpack.

This is the single most frustrating part of any Ridden hive. The number of players complaining about this poorly featured moment is staggering.

Anyway, grab your explosives and pick a cave to blow up.

Place the explosives on the cave entrance and step back.

Here are a few of the enemies waiting for you behind the cave webs:

Once you set the explosive, you activate the enemy inside the cave. If you’ve activated a Hag, Ogre, or Breaker, you can hear their iconic music start up before the explosive goes off, which gives you at least a few seconds to prepare.

There’s no way to tell what’s behind which cave. We’ve encountered the Ogre in three different caves, the Hag in four, and the Breaker does whatever it wants whenever it wants. As such, you can’t prepare for each boss fight before it happens. But you can have items waiting close to hand for whatever you encounter.

Luckily, the map is relatively large. So if you trigger one of the bosses, make sure to keep your distance and kite them around the map.

Did you beat the boss? Great. Head into the now-open cave, and you’ll find a set of explosives waiting for you. Grab them, and you’re on to the next cave.

Just keep blowing up cave entrances and killing everything you find behind them. It will take some time, and you’ll go back to the resource pile from the beginning more than once. But the good thing is the map is riddled with propane and gas tanks, so even if you run out of offensive items, you can still make things go boom.

The Ogre should be hiding inside the last cave that you blow up. Once you kill it, you’re ready to clear the hive.

Don’t worry; we didn’t forget about the Skull Totems. You’ll find the first one sitting square in the middle of the map, right under the giant Ridden heart hanging from the ceiling. The second one should be next to the first explosive you find, and the third one is hiding behind a protective web somewhere.

You can go about and collect them as you clear the Nursery or wait till the end to grab them before you ascend the ladder. Depends on your playstyle.

Next to the pile of resources and bloody waterfall is a fleshy pillar that rises up to the ceiling. It doesn’t look like it, but you can actually climb that pillar. Traverse to the top, and you’ll see the Golden Skull trophy.

The last cave you exposed should have the noticeable neon yellow ladder you’ve come to recognize so easily. Run over with all three Skull Totems in hand, and you’re ready to get out of here.

The Nursery is one of the easiest Ridden hives you can find, and if you ever come across it during your spelunking, you shouldn’t pass up its opportunities.

Find the explosives, blow up some caves, kill everything that comes out of them, and you’re home free.

If you find yourself struggling to survive in the Ridden apocalypse, we’ve got you covered. From deck-building guides to the lore of your favorite characters, we’ve done more in Back 4 Blood than we’d care to admit. Our knowledge and expertise are yours. 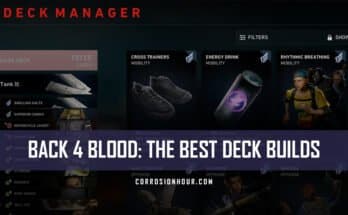