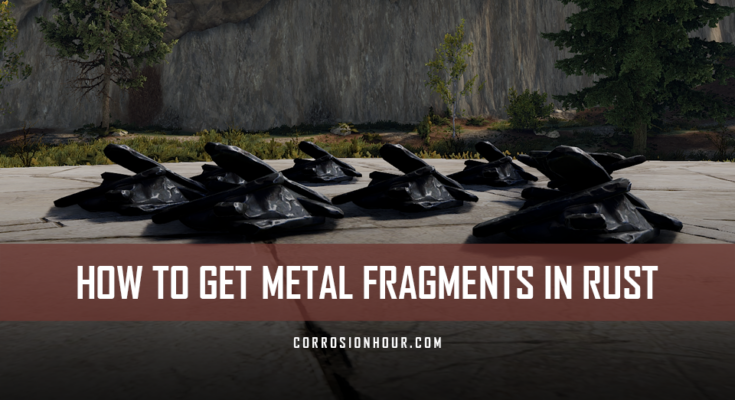 Knowing how to cook metal fragments opens a world of opportunities in RUST.

When you’re ready to move beyond wood or stone, tools, and weapons, you’ll need to learn about how to cook harvested metal ore into metal fragments. Used in just about every critical recipe, metal fragments in RUST require a two-step gathering process. First, procuring metal ore, then using a furnace to turn the ore into fragments.

Once you’ve smelted ore into metal fragments, you’ll have a range of new items to build in RUST, such as:

Getting metal fragments in RUST isn’t complicated, but few steps are involved, and a few options for those that don’t want to follow the traditional route. Both ways have their pros and cons, and which path you follow will come down to your playstyle.

They appear as small boulders with a shining silver split running across the stone. Each scattered metal rock will yield 50 metal ore when picked up and often spawn in groups. So whenever you find one, keep an eye out for more.

The primary method of gathering ore is from mining metal ore nodes found on the map. Metal ore can be gathered by striking the node with a gathering tool.

Different tools will gather various metal ore. Metal pickaxe volumes, salvaged pickaxe, and the jackhammer all yield 600 metal ore each. The stone pickaxe will yield 485 metal ore. Other tools can harvest metal ore, albeit at a much lower rate. In a pinch, you can use the salvaged hammer, bone club, and rock. However, as each of these tools will give up less than 400 metal ore, using these tools is hugely detrimental to metal ore gathering.

Once you’ve gathered enough metal ore, you need to smelt it in a furnace. There are two furnaces in RUST, both small and large. With a small furnace costing only 200 stone, 100 wood, and 50 low-grade fuel, it is feasible to make multiple small furnaces for the inside of your base in the RUST early game.

The large furnace requires 500 stone, 600 wood, and 75 low-grade fuel to craft. However, you’ll need to find it’s blueprint before you can craft one. Large furnaces’ primary drawback is that you must place them on flat ground and need a furnace base or furnace base attachment to keep them safe.

Either furnace works by placing metal ore and wood into the furnace slots. You can split the metal ore into multiple spots so that each pile smelts separately. Keep in mind to leave at least two spaces left in the furnace for the metal fragments to appear. Also, keep an area for the charcoal left behind from the burnt wood.

Getting raw metal fragments in RUST

There are several ways to get metal fragments without having to smelt ore down in a furnace. Each method has its benefits and drawbacks.

Metal ore can appear as loot in minecarts and mine crates. Or, if you have enough scrap, you can purchase 250 metal fragments from the Outpost monument vending machines for 25 scrap.

If you can take down a Bradley APC or Patrol Helicopter, you can harvest metal ore from the vehicles with the same tools you use to mine metal ore from nodes.

If you take a component that requires metal to craft, you can place it in one of the recyclers found at one of the major monuments. While you won’t get the entire cost of crafting back from a recycler, you will at least get something from the components which would otherwise go to waste, cluttering up your base and inventory.

The final way to find metal fragments in RUST without smelting is to use the Giant Excavator monument. A recent update has increased the output of metal fragments and decreased the cost to run the excavator. For 15 diesel fuel, the monument can run for an hour yielding 150,000 metal fragments. While this sounds like the fastest way to get your hands on some serious metal fragments, it carries the highest risk.

The Giant Excavator monument will sound an alarm and broadcast its operation on radio frequencies letting players know that it’s currently in use. The monument will take an hour during which players will intervene and take the rewards for themselves.

What’s your favorite way of finding metal fragments in RUST?

Each method will yield different amounts of fragments, and each has various risks. Most players are content with mining ore from the nodes found around the island. But if you’re willing to fight for it, more PVP involved options such as the Outpost and the Giant Excavator monuments exist.