Learn how to take down the patrol helicopter in RUST like a pro.

There are many reasons to want to kill the patrol helicopter, such as the high tier loot and resources it drops, but one particular reason is to create a time window before initiating a raid. When players get ready to raid, they need to consider killing the patrol helicopter first. The last thing raiders want happening is being ambushed and interrupted by the NPC-controlled patrol helicopter.

It’s tempting to start the RUST raiding cycle by farming up materials and crafting satchels and explosive rounds. But if you want people to take you seriously, and more importantly, be capable of raiding more substantial targets, you’re going to need to round out your raiding toolkit.

For that, you’re going to want rockets and timed explosive charges. The best way to get your hands on these tools, and a wide array of other endgame loot pieces, is to bring down the patrol helicopter for its loot.

To take down the patrol helicopter in RUST, you’ll need:

If you’ve played RUST for any reasonable amount of time, you’ve probably met the patrol helicopter before. It spawns every 2-4 hours and does a circuit of the island, visiting each monument before leaving again.

The patrol helicopter will engage any player it sees wearing more than two clothing pieces or if they have a weapon more advanced than a bow on their hot bar. If you’re not keen to fight the patrol helicopter, make sure to strip down and tuck your guns away until it passes, or stay concealed inside a building.

Veteran RUST players are familiar with the patrol helicopter’s low rumble when approaching and are thankful for RUST’s excellent directional soundscape. However, it’s often a surprise for new players the first time they see the patrol helicopter come rolling over the horizon or view its spotlight at night from a distance.

After spawning, the patrol helicopter makes a beeline for the closest monument and then chooses another monument and travels in a straight path. Knowing this flight pattern, you can avoid its general path or set up your helicopter tower in such a place that you’ll get an easy shot on it to trigger the fight.

If you engage the patrol helicopter, it will open fire on you and begin searching the area if it loses sight of you. About 30 seconds after losing sight, it will get bored and return to its original patrol path. 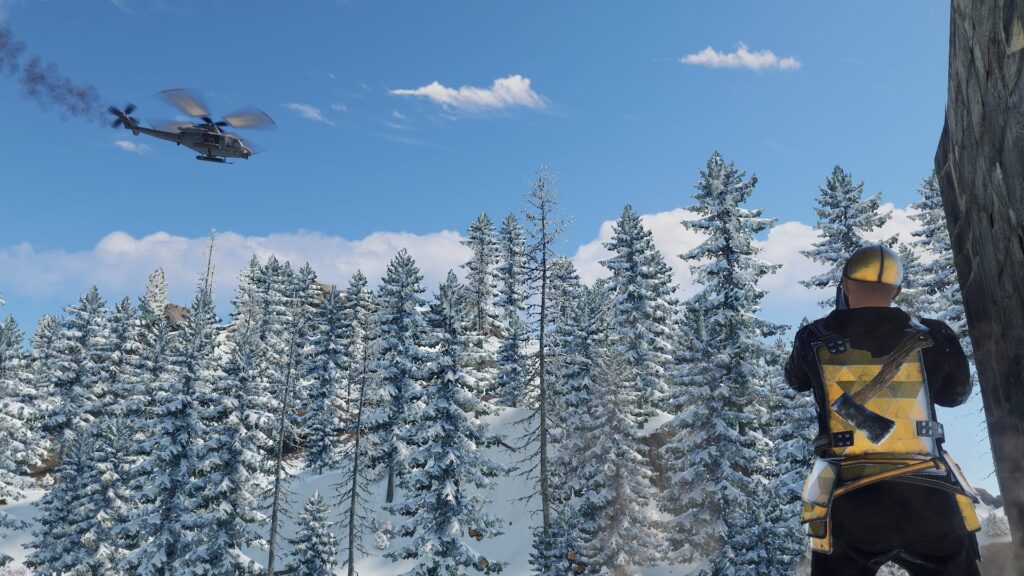 The patrol helicopters’ primary weapons are a pair of mounted machine guns that can fire omnidirectionally. While its aim isn’t perfect, if you’re out in the open, these guns will take you down eventually.

But beware, if you run into your base for cover, the patrol helicopter will switch over from standard guns to its explosive arsenal and try to destroy the structure to get to you.

Build and prepare a heli tower for future encounters

It’s highly advisable to build a separate base or “heli tower” to take on the patrol helicopter. If you try to fight it from your main base, you put the base at risk of weakening its defenses, or worse, total destruction. Other players may capitalize on the damage your base has taken from the patrol helicopter to begin an opportunistic raid. The minimum footprint for a base designed to take out the patrol helicopter is usually two by three foundations, with walls or door frames separating each segment. You will need windows on the outer walls so that you can return fire. You are by no means limited to a 2×3 structure, but this would be considered the bare minimum.

Well-known base builders Evil Wurst & Zedge released a simple heli tower in 2019 that is still effective to this day.

You can check it out here:

Many players insist on building a tower-like structure, but this isn’t necessary. It can help to have the height vantage when having to defend the patrol helicopter’s debris and loot crates from other players, but you can get by with a ground-level base during the Heli fight.

Once you’ve engaged the patrol helicopter and are in your base, it will begin to fire bursts of rockets to take out walls and napalm to light fires within the structure. It’s good to have as many walls and door frames as possible within the Heli base to minimize rocket splash damage and provide spaces to move into if a room gets napalmed.

If you can get your hands on vertical embrasures, it’s smart to install them on all windows so you avoid the patrol helicopter getting lucky rocket shots through the windows. These are preferable from the horizontal embrasures because they enable you to shoot up in the sky and towards the ground if necessary. Closeable windows are an option, but they’re made out of wood and break easily, especially when hit with napalm. It’s essential to make sure that at least one room in the heli tower is closed off without windows so that you can keep sleeping bags, beds, ammo, medicine, and the tool cupboard secure.

The ideal weapon for this fight is the assault rifle. If you are a fantastic shot, you might consider a sniper rifle for precision shots. Just be mindful that the patrol helicopter flight pattern can be erratic.

Your armor must withstand the constant barrage of the patrol helicopter’s machine guns, which will continuously fire upon you even once it starts using rockets and napalm. To that end, we recommend the bean can helmet and road sign armor as a minimum.

It’s almost inevitable that the patrol helicopter will get some napalm in your building, so it’s wise to have fast healing tools on hand, such as the medical syringe. Be mindful that anything that heals over time will cancel out if you take new damage, which can accidentally happen when there’s a lot of fire around.

The best way to start the fight with the patrol helicopter is by firing on it from your heli tower. Don’t depend on it spotting you armed, as its detection can sometimes be a little iffy, and it may fly past without engaging. Keep in mind other players will also be trying to “tag” it to lure it to their heli towers.

Once you have initiated the fight, the patrol helicopter will turn towards you, making its initial strafing passes with a barrage of machine gunfire. Fortunately, the patrol helicopter’s attacking behavior is relatively predictable. If it goes wide and looks like it will pass parallel to your base, it is lining up for more machine gunfire.

If you see it travel away from your base in a straight line, it’s preparing a rocket run. When it turns its nose to face your tower directly, it will accelerate towards it and fly over it, delivering a salvo of rockets and or napalm.

It’s important to take cover during this phase, as direct hits from rockets or getting caught up in napalm can be lethal. Consider moving from the side of the tower facing the patrol helicopter to the opposite side. Switching sides will save you from lucky rockets that make it through windows or those that follow when a wall inevitably falls.

How to damage the patrol helicopter in RUST

The patrol helicopter has a health pool of 10,000 hit points. You can slowly take it down by hitting its body, but this will take over 200 rounds from a weapon like the assault rifle.

Its weak points are its two rotors, on the top rotor and the tail rotor. The top rotor has 900 hit points, and the rear has only 500.

If you can manage to take out the two rotors, it will fall out of the sky much faster than working through its body’s large health pool. The ideal time to attack the patrol helicopter is when it strafes with machine-gun fire or is retreating to line up for missile fire.

You’ll get hit noises if you’re hitting any part of the patrol helicopter, but if you manage to hit the rotors, you’ll hear a distinct “junk falling” sound effect and see debris falling.

Given the distance you’ll be firing from, sustained bursts of fire are never advisable. Short bursts of 2-3 shots or single shots will increase your accuracy substantially.

Have a plan for the wreckage

Once the patrol helicopter crashes, its crash site will have burning debris scattered in a focused area. This debris must cool before you can get in to access the crate’s loot or harvest the debris. Opposing players will likely see or hear the fight or even see the helicopter’s wreck icon on the map and come looking. A downed patrol helicopter also produces a temporary no-build zone around it, so you’ll have to defend the carcass from other players with traditional combat. Having considered this when building your heli tower, it’s advisable to have defensible peak downs that will allow you or your teammates to play overwatch, giving you a distinct advantage while waiting for the fires to go out.

It’s also essential to have a plan in place for where you plan to return after looting the wreckage. Please don’t leave your guns in the tower, as many players like to wait on you to do all the grunt work before they ambush you. Looting is always more fun when it’s of other players.

You’re ready to take on the patrol helicopter in RUST

Downing the patrol helicopter is a right of passage in RUST. The heli has caught almost all players off guard in the past, and it is sweet vengeance to see it in flames at sea level. The loot table for the heli-crates is incomparable, with high odds of advanced raiding and base building tools.

Once you’ve become acquainted with taking the patrol helicopter down, it’s worth doing it consistently for the military weapons and armor it provides. Just remember that other players will see and hear you take it out, effectively letting them know that you’re a prepared potential raider and a juicy raid target to boot. If you’re successful and haven’t already done so, consider setting your eyes on the Bradley APC as your next target.