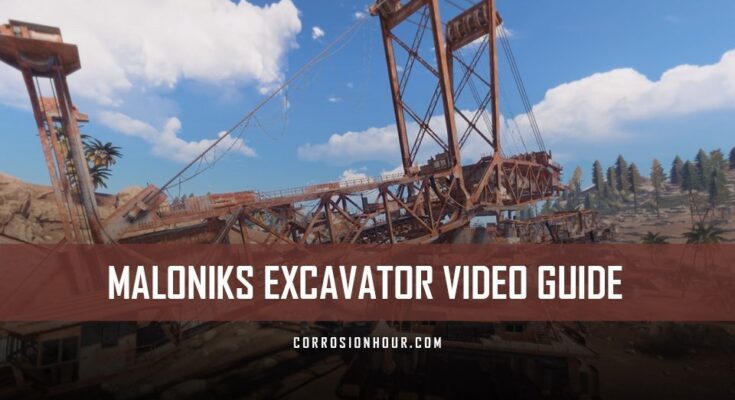 Our partner Malonik is back again, with a quick guide on the Giant Excavator Pit monument introduced in July’s Excavator Update.

In this video, Malonik walks us through a couple of areas, including how to operate the Giant Excavator Pit monument. He also drops a few factoids around the monument itself, providing statistics on what it costs to run, what you can earn from running it, and even what it would cost to wall off this massive monument.

Keep an eye out on upcoming changes to the monument, as it’s pretty common for the Facepunch team to make modifications after the update has been playtested by the masses.

For those that haven’t seen it yet welcome to the biggest, most interactive and insanely profitable monument in the game.

This behemoth of a monument requires at least 10% rad protection so if you can at least get a burlap set going you should be all good as far as radiation goes.

I’m not entirely sure I can say the same about the 17 scientists that will be waiting there for you. We ran a few tests and it seems like they have a longer respawn timer than the oil rig scientists. So, you can most likely wait until a group finishes using it and sneak in for a bit.

There are some loot crates dotted around the place, nothing too crazy and no puzzles as far as we can see. That being said the main point of this new monument is still to come.

First, you need to get to the engine room, you put the new diesel fuel into the tank here and then you run up here and turn it on. Be warned that the entire monument has just lit up and come to life. There will likely be people coming to counter so keep an eye out.

Now quickly make your way down to either of the control rooms at the front of the monument. Use the control panel and set it to whatever resource you’re wanting it to farm. Keep in mind that you can only have it set to one resource at a time so if you start on stone and then swap it to metal, you’ll have some stone and some metal but it can’t gather both at once.

As soon as you select what you want it to farm the excavator will get to work and start mining away for you. So, to go along with the place being lit up you now have the entire front half of the massive monument waving around and mining.

Oh, and in case you haven’t seen it in the engine room yet there is a frequency code written on the wall. Anyone can set up a simple alarm so that they’ll know from their base or wherever they are that someone is doing the event.

Funnily enough, I’ve done a video covering how to set such an alarm up, why not check it out, should hopefully be on the screen right about now and I’ll put it in the description too.

The only other thing worth mentioning before we hit the looting spots is the recycler. It’s up to you whether you want to do your scrap runs here. Personally, I’m going to hold off until I see how this monument plays out in an actual proper wipe.

Now the excavator will eat roughly 1 diesel every 2 minutes or so. Once you’re out of fuel or ready to leave you’ll need to stop by the two separate loot spots to collect all of the resources that it’s been farming.

Speaking of all that farm, how much are we really talking about.

Gal and I ran some tests and did a few calculations.

Those numbers might seem kind of small but when you bring along a few drums of diesel the numbers add up quickly.

There are also alternatives for obtaining the diesel that won’t set you back low-grade. A good example being the large oil rig which at the time that we stopped by to test it was spawning two barrels. There are supposedly other spawns at other monuments, but we couldn’t find them while testing it on staging.

Also, while we don’t necessarily condone it if there are any groups out there that are thinking about compounding the new shiny monument, we crunched the numbers.

We used over 200 high walls and 1 stone gate to compound it. That’s over 300,000 stone which means you’ll need 110 barrels of diesel and 3.6 hours of time for the excavator to farm all of the stone that you need for the compound walls.

Honestly, I know that most people are seeing those numbers and wondering why I’m even bothering. But I guarantee you that people are 100% going to compound this thing off. It makes farming any of the core resources absurdly easy as well as the loot from the scientists, your own private recycler, etc.

Also please keep in mind that the figures may be adjusted by the time you actually get to the excavator. This was all tested and recorded on the staging branch close to the patch being dropped. So, while it should be correct, they might have made some last-minute changes to it.

If that is the case, we will update the description of the video to include the changes.

Anyway, that’s all from me for now, let me know what you think about this new monument in the comments. If you liked the vid hit the thumbs up to let me know and if you’re new around here subscribe to see more!