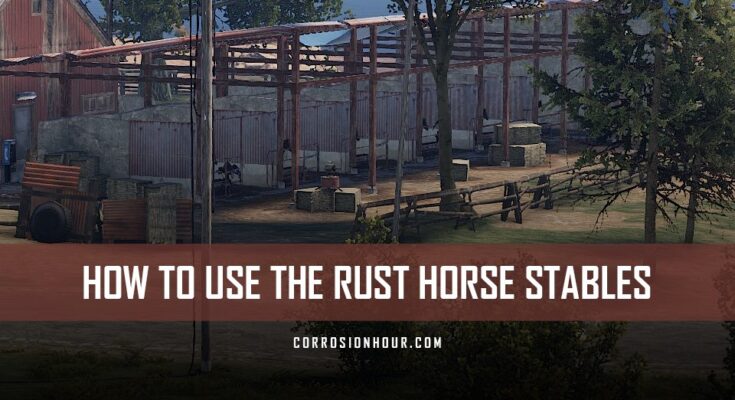 Stables in RUST, taking care of the horses, of courses…

If you’ve recently had trouble finding wild horses around the map, that’s because they mostly live in quiet comfort at one of the island’s new horse housing projects, the large barn, or the Ranch monument. Players can still find wild horses scattered across the map, but much rarer than before. If you want your very own Mr. Ed, you’re going to have to cut a deal with one of the local farriers.

In this guide, we’ll outline how to;

Much like boats and minicopters, these equine modes of transportation have become an NPC controlled commodity. There are advantages and drawbacks to this new horse acquisition method, namely the guaranteed availability of horses versus the imposed scrap cost.

Locating the horse stables in RUST

There are two monuments that contain horse stables, where players can purchase horses and their accessories.

If you open your map with the G key and look around, you’ll see either one or both of the monuments depending on your server’s map size.

The first monument is the Large Barn, a large red barn with partially fenced-off areas and large round hay bale stacks, defended by AI-controlled auto-turrets. You will find the stable master located in a small room with an open window, ready to sell at the Large Barn’s front. 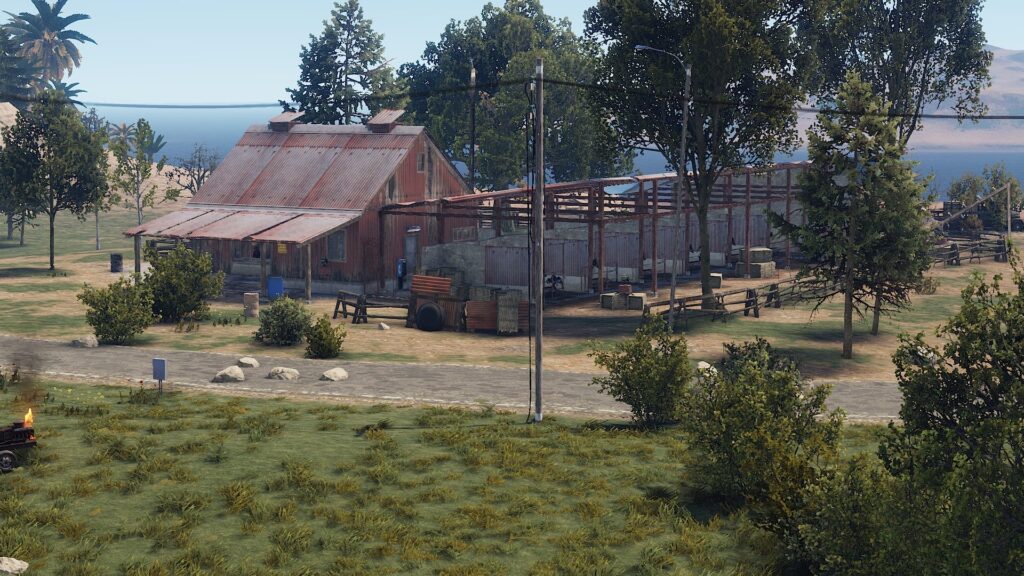 The second monument is the Ranch, a smaller red building with a long row of cement-walled stables, surrounded by fencing and defended by AI-controlled auto-turrets. You will find the stable master located at the front of the Ranch in a small room with an open window.

Both will spawn in open fields, along the shores of lakes, or in lightly wooded areas, and at the moment, gravitate towards appearing inland and closer to the center of the map.

Like all NPC controlled environments, RUST’s combat tagged system dictates how the stables automated defenses will react to you. The primary guards are a series of AI-controlled auto-turrets set up around and inside each monument’s perimeters. Be on the lookout for the green lasers. 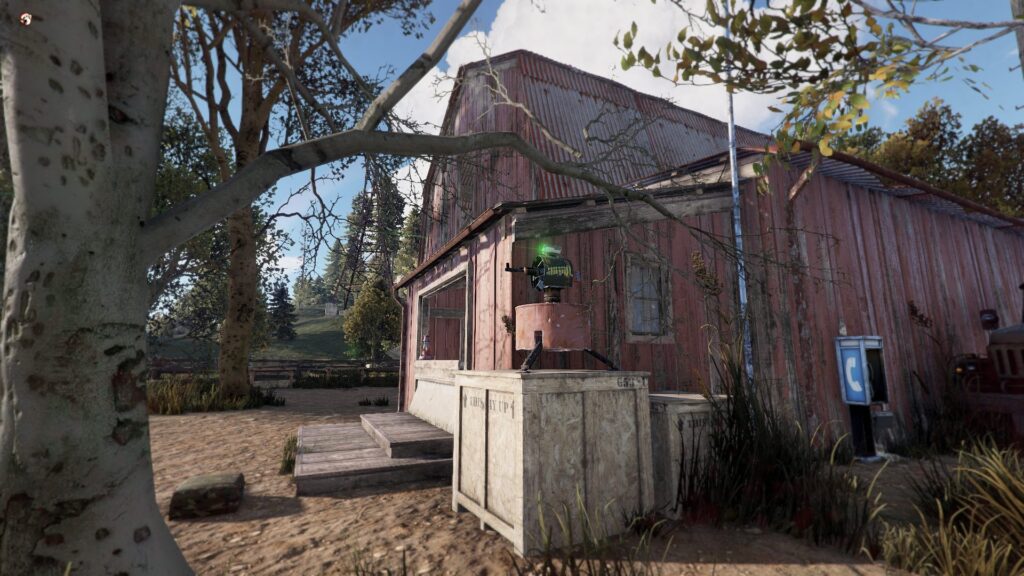 If you’ve swung a weapon, fired a gun, or been involved in PVP recently, you’ll see the red combat tagged icon at the top left of your screen. If you open your inventory, you can mouse over the icon to see how much longer you’re tagged. 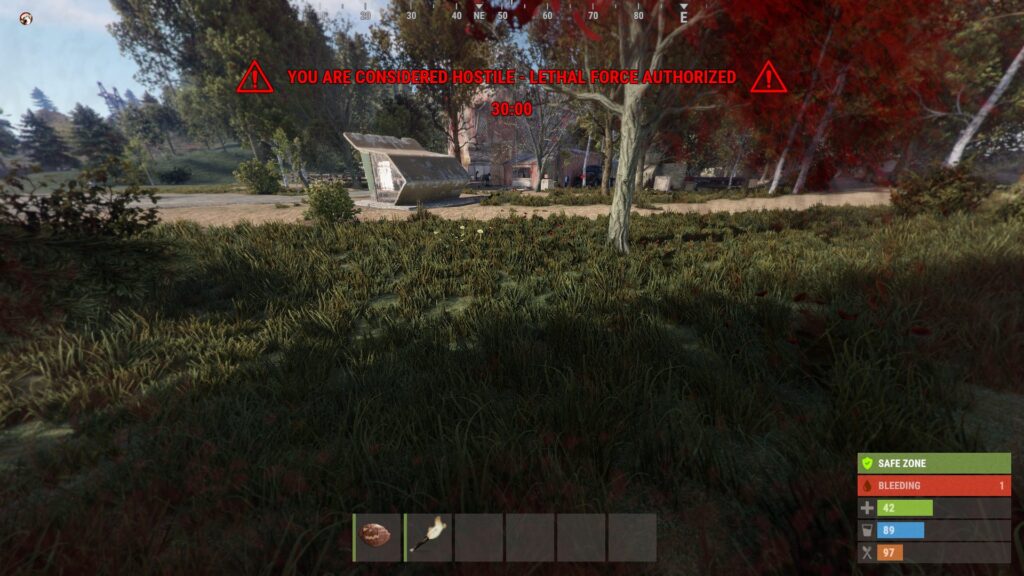 It’s usually not a long-timer unless you’ve engaged in PVP near or in one of the monuments. Doing this will escalate how long it is before you’re allowed back, starting at half an hour and increasing from there.

Shopping at the horse stables in RUST

If you follow the edges of the shed-like structures at both the Large Barn and or Ranch, you’ll see a friendly NPC stable master through a small window. If you’re having trouble spotting them, listen out for their music. They tend to be listening to some bangin’ banjo midi files. Once you spot them, they’ll give you a friendly wave, and if you interact with them using the E key, they will open the prompt shop dialogue. The stable master vendor sells:

The critical item here is the horse saddle, which is the equivalent of purchasing a horse, as it enables you to select one from the stables.

Picking the right horse for you

When you’ve found the stables, take your time picking out a horse. You’re safe in the stables, and there’s no rush. As you approach a horse, you can press the E key to open up its inventory and see its stats. 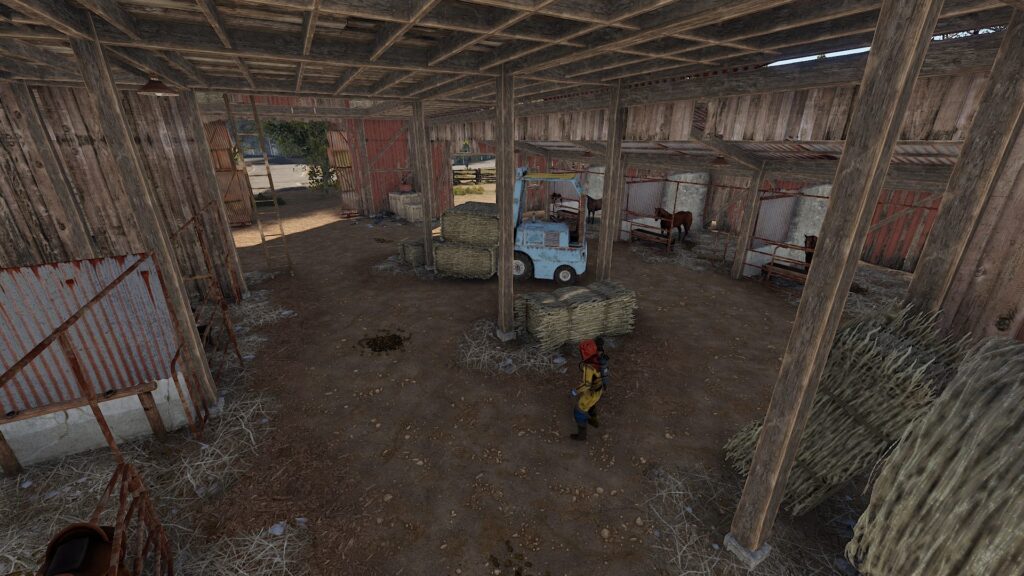 Different breeds of horses have varying stats, which affect speed, stamina, and health points. The horses don’t have differing costs. Once you’ve purchased a horse saddle from the vendor, you’ve effectively purchased a horse.

Hold the E key while looking at the horse you’ve picked and mouse over the saddle horse option. And voila, that’s now your proud steed. 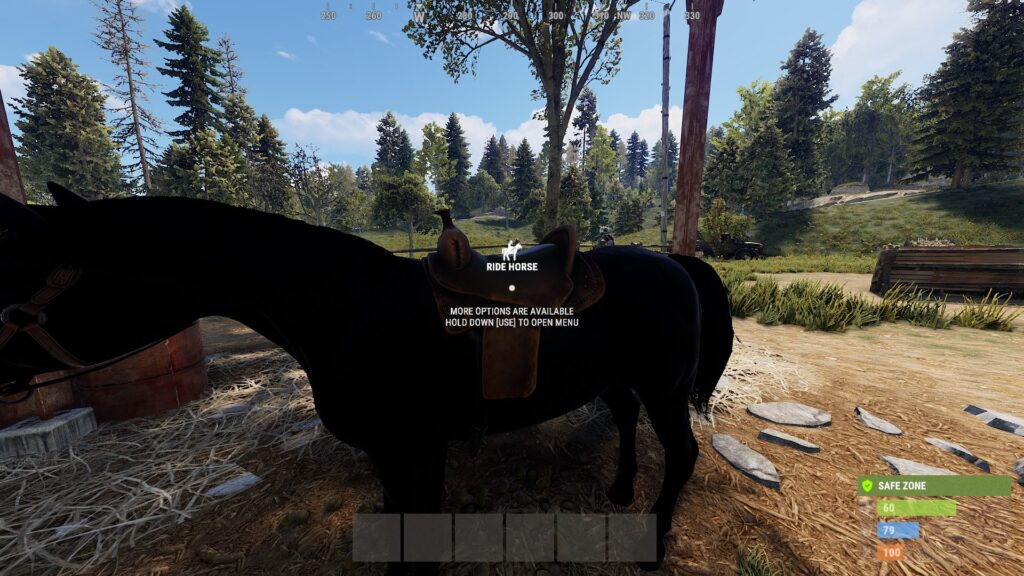 You will appear on the horse automatically when you saddle it to prevent griefing and accidents. And you’re free to ride away from the stables with your new purchase.

In terms of standout horses, you’ll want to keep an eye out for black and white thoroughbreds, chestnuts, and piebalds. These breeds have the highest top speed capacity. In contrast, any horse can recover stamina by being fed. And the only horse with a substantially better HP stat is the Bay breed.

Advantages & disadvantages of the horse stables in RUST

Like any old spawnable element of RUST, finding a horse boiled down to luck and RNG (random number generation.) Meaning that having a horse to travel was reduced to chance, which isn’t fair to most players.

Doubly so, since servers had a horse spawn cap that dictated the maximum number of horses to appear per server. And trust us, in most wipes, there will be a group of players with a large enough compound that they will try to… acquire all the horses.

Now horses are available to all, at a known location, for definitive costs. And a negligible cost at that. 150 scrap is undoubtedly not worth stalking a player and risking death at the stables.

The stables are not large monuments, and there will undoubtedly be groups that encircle the stables for a laugh. On top of that, while the saddle’s cost is relatively low, scrap is already a precious commodity, particularly for researching blueprints.

Despite this extra cost, the guarantee of getting your hands on a horse, if you want one, seems to be a fair trade, not to mention the introduction of a new secure social hub in the form of the stables themselves.

The horse stables in RUST, the low tier hangout

So that’s the stables. Go and check them out, even if you’re not in the market for a horse. The monuments are fun enough to explore,  with enough sheds and hay that I’m sure you could throw a shindig’n hoedown with the in-game instruments.