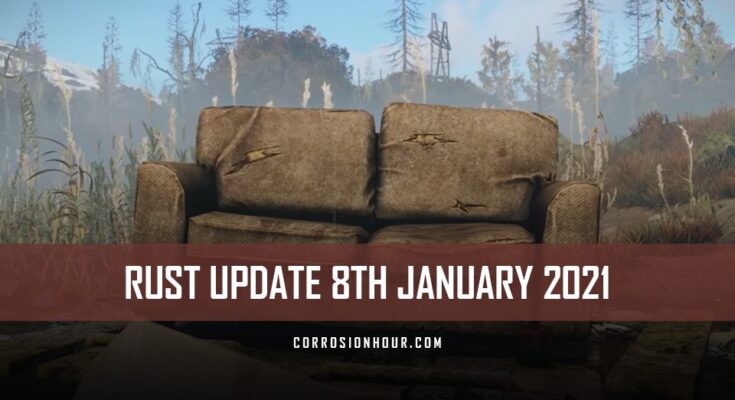 It’s a new year and a fresh wipe for blueprints thanks to the adjustments and rebalancing of the tech tree system in the January 2021 update.  A handful of nice quality of life improvements have gone into the update for both players and server owners–but who are we kidding? The biggest news in RUST right now is that EVERYONE IS PLAYING IT. And to celebrate this joyous occasion, Facepunch has enabled a new Twitch Drops event for viewers to earn three new in-game items: A sofa, a sheet-metal door skin and a hobo barrel of your very own. Additionally, viewers can earn unique skins from a handful of big Twitch streamers, so be sure to start earning progress towards your desired RUST drops now!

But first! You may have noticed Rust is flavor of the month on Twitch at the moment, when Twitch is working, and some people are even playing it. Dead game, by the way; 3 out of 10.

With that in mind, right now, there’s also a few new Twitch drops active to ride the hype train, as it were. Totally coincidental, I’m sure, but here’s a quick rundown.

You can get a sofa complete with orthopedic tilt and suspicious stains in exchange for 2 hours of your life, which for only 100 wood and 30 cloth will allow a couple of players to cozy up and receive 100% comfort, as long as they’re in the same household or support bubble presumably.

For a four-hour stint, you’ll get this industrial skin for the sheet metal door, which actually has see-through glass. Watch-to-win much.

And then, for a full 8 hours of having a twitch window open, you’ll get a BP for this stunning hobo no hobo barrel. You know what these things do already; they’re the same as the ones around the map. But this’ll let you bring the outdoors inside for just 100 wood, with 50 of that in the barrel. So basically, just a reskinned campfire.

Not only but also, there are some unique skins dropping on Twitch for watching a bunch of streamers who have been playing the game for at least a whole week! And that’s all the free advertising they’re getting from me.

If you want more details about how to start earning drops and all the answers to the usual stupid questions about this stuff, then there’s a link in the description. All the best.

Now, if the blueprints on official Rust servers were a bottom, then they’d be absolutely filthy because it’s been several years now since they were last wiped. Well, all of that just changed, thanks mainly to the new tech tree system. See my previous video, link on-screen now. Because it was such a big change, the TEAM felt that the playing field of knowledge needed to be leveled at last. Although, reportedly, you shouldn’t expect another BP wipe on officials for quite a while.

With this month’s big update that was merged in on the 7th, There were quite a lot of quality of life improvements for both players and server owners.

Firstly, the placement guides for sleeping bags, beach towels, and beds will now change to orange if you are trying to place them close to another one of your spawn points, you can still put them down, but this small change helps you to be aware that there will be a shared cooldown.

You should no longer receive high amounts of radiation when strolling past the Launch site main building, which is nice. And the research cost of tier 2 engine parts was reduced to 20 scrap; come on, start using those cars, you know you want to. Please?

SAM sites have had a few tweaks to their behavior. They should no longer target grounded, unmounted helis, and uninflated balloons, regardless of where they are. Previously, they would still target them as long as they were higher than the SAM site itself. Now they’ll only fire on targets that have someone mounted or are currently in the air. Oh, and auto-turrets now auto-reload after adding a weapon/ammo.

And now for the Rust weather forecast, we should see more clear skies from here on in with less chance of ‘weather events’ such as rain and storms.. as these have been toned down a bit, Shame. Although as with most things in Rust, the weather is always SUBJECT TO CHANGE.

For server owners, there were a few nice little perks this month. First of all, there’s now a centralized banning system that you can take advantage of, and if you are the owner of more than one server, then this means that you can natively sync bans across all of them. And I’ll put a link to the wiki page for this in the description for you.

Apparently, there was an ‘incident’ last month which saw one official server get wiped halfway through when the Xmas patch went live. Hilarity ensued. The upshot of this is that as well as squashing whichever bug was responsible, some functionality was added to maintain rotating backups of older saves, so if something embarrassing happens, you can just rewind to a less embarrassing time.

The convar you need to know for this is server.saveBackupCount, the minimum value is two, but you can set it higher, and restoring from one of these saves is as easy as removing the number suffix from it. For more details, please see the dev blog, or just pause this screen.

Those were the most notable things that changed this month, but remember, it is only January, and the TEAM have just emerged from their holiday cave base, so you should see things speed up from here on in. And the word on the street is that there are big plans for content this year. I mean, just look at some of the new stuff that was added in 2020 despite it being a complete Star Wars Christmas special of a year. I think they did quite well.

Over to works in progress, where I have some exclusive visuals to show you now. You may have heard me mumble a lot recently about plans to link the island’s train network up and allow us to trundle around it on a work cart. Well, sadly, I can’t show you anything on the cart, but images have just emerged for some of the new underground tunnels.

Of course, it was always going to be a challenge to link up a rail network on a procedural map, what with all the existing roads and trails to work around, so as I expected would happen, all the tracks are going subterranean.

Initially, when I heard about these, I had imagined them to be like the mine shafts, but that’s probably my fault for watching Temple of doom so many times. They are actually going to be proper industrial jobbies that look like the London underground on lockdown.

As you can see, there will be quite a few different sections with some two-way traffic in places; I’m not sure exactly how it will all work or when it’ll be ready yet. But, one thing’s for sure; we’ll soon be able to take some slightly stealthier routes across, or underneath, the island.

What do you think, though? Please use the comments as a platform to tell me your most intelligent thoughts.

If you’d like to support my channel, then I have a Patreon page and some sexy merch over on Teespring. Liking and subscribing are a huge help, too, so please do if you haven’t already. You can catch me streaming on Twitch and stay up to date with my content on Twitter, Facebook, Discord, and my Steam group. I shall catch you all soon, but in the meantime, keep calm and stay Rusty. Cheerio.