The RUST ridable horse command, introduced on June 6th, 2019 in the Giddy Up update is the first pass at introducing player ridable animals. This command allows admins and moderators to spawn in an individual horse with a saddle. RUST players can now walk up and mount horses, as they are stationary and no longer attempt to flee or become hostile. This allows players the ability to sprint around the game world while on horseback. The command can be used just about anywhere on land.

All horses will now spawn into the game with the brown saddles equipped and are stationary. The previously wild horses will no longer spawn by default, as their population variable has defaulted to 0 in vanilla RUST. If admins wish to bring them back, simply modify this value to a positive number. A new variable introduced for the ridable horses now defaults to 4 per square kilometer. On a server with a map size of 4000, there are roughly 40 horses spread across the terrain, when the default setting for the horse population command is set to 2.

Horses will despawn when left outside and unattended for 3 hours, though this can be modified by changing the associated server variable baseridableanimal.decayminutes. Horses can also be stored inside a base or under a roof, however, they will decay at an accelerated rate. There’s potential for future work on creating hitches & troughs so that horses can be kept forever, however, the development team needs to see the impact of horses in production servers before moving forward. When mounted on a horse, you will now see a new UI element above the health bar, that displays the horse’s stamina.  There are two shades of yellow. The lighter color displays the current stamina, while the darker color displays the maximum stamina amount. When horses run on roads, they will use less stamina while sprinting and will sprint faster. In addition, if you feed a horse before traveling, it will also receive a small speed boost.

Horses can be fed by simply leading them to an area where food is grown or alternatively tossing just about any form of food in front of their heads, such as mushrooms, pumpkins, corn, human meat, etc. It can get pretty gross. In our tests, the horses ate everything, with the exception of candy canes and small trout. Feeding the horse can also help regenerate their life, which is currently set to a maximum of 750 health. An added benefit to keeping horses well-fed is that their stamina will recover much faster.

When traversing up and down steep elevations, moving over rocks, or through shallow areas of a river, the horse will automatically slow itself down. Horses also refuse to enter deep areas of water but can move through the shallows on rivers and beaches.

Players are able to engage in multiple activities while on horseback, as we were able to farm loot containers of various sizes and if quick with the E key, we could scoop loot before it fell out of range. Shooting weapons, such as guns and bows are also possible while using the ALT key to pivot your view.

Be careful not to shoot the horse when engaged in combat, as it does take friendly fire. Damaging the horse is the only way to view its current health, but you must be up close to it. If you’re riding the horse and it is killed by another player, you will be thrown off, but no damage is taken as of the current implementation.

The following controls are based on default game settings. Note that backward movement has not been implemented for horseback riding as of June 8th, 2019.

Practical Reasons for the Command

Who can use the RUST ridable horse population command and variable

The RUST ridable horse population command and variable can be issued and configured on vanilla RUST servers by admins and moderators only. Non-admin players cannot use the spawn command or modify the server variables. 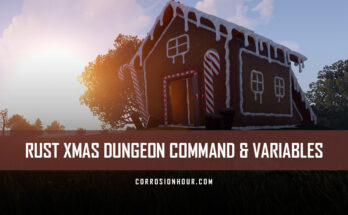