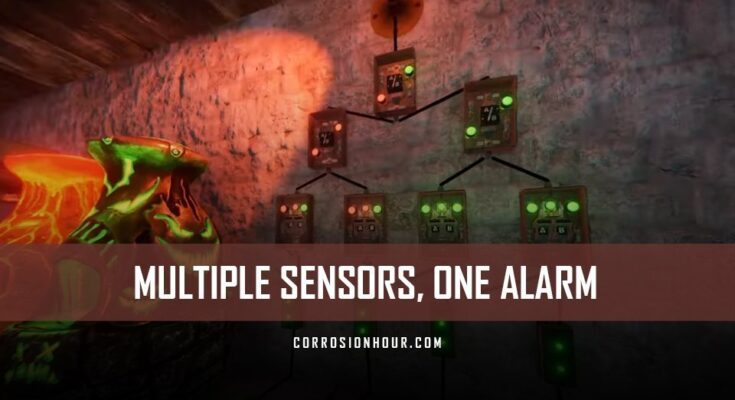 Our partner Malonik is back with a new RUST Electricity 101 video.

In this video, Malonik guides us on how to build a circuit that allows for connecting multiple HBHF sensors to a single alarm.  This technique is tricky to set up correctly and is especially useful for setting up an alarm that alerts you of door campers or other hostile players creeping around your base.

In his example, Malonik shows us his solution for setting up an alarm inside of a command room that displays which side of the base the enemy is located. It’s really impressive.

Having this intelligence, whether in your base or while remote, can help give you an advantage you’ve never had before: information.

Hey guys! Mal here and today we’re going to take a look at hooking up multiple HBHF sensors to a single alarm.

This is something that I’ve had a number of requests for, and it’s actually a bit trickier than you might think. See if only one person is in front of a sensor then the HBHF sensor only outputs 1 power.

Now if this was a single HBHF sensor to an alarm it wouldn’t be an issue. However, because we want to have multiple sensors to the one-alarm we need to connect them all up after the HBHF sensor. Doing that is going to require more than the potential 1 power that is being output.

That’s where things get more tricky, and the best solution that I’ve come up with is this circuit. Now don’t worry this isn’t as daunting as it may seem at first glance.

So for starters each of these columns represents a different wall or place that you want a sensor. They’re identical so once you nail the first one the rest is relatively easy.

Let’s take a look at connecting one of the columns so you understand what’s going on here. For each HBHF sensor you want we are going to need 2 e branches, 1 AND switch, and 1 HBHF sensor. So starting at the beginning we run our power source into an e branch.

So this is what we are going to need wherever you’re wanting to have a sensor. For the sake of this guide I’m using 4 sensors which should be enough to cover most bases fairly well. That being said, you can add more if needed.

Once you’ve got this part sorted you should have your sensors around your base, each connected into their own little circuit like these.

So now we need to connect all of the sensors into one big circuit so that they all set off one alarm.

Next add another row of or switches, one for every two in the row below. Run the outputs from the first row of switches into the inputs on the new row.

Now depending on how many sensors you’ve set up, there could be a few more rows. Because we’re only using 4 sensors for this example we’ve already hit the point where the entire circuit is coming into one single output.

Once you’re at that point we need to connect the final or switch into the alarm. Which alarm you go with is up to you, whether it’s lights, audio or even a broadcaster so you can know if someone is near your base while you’re out roaming via a pager.

The final step is to go through your first row of e branches and configure the power, each branch needs to be set to at least 6 power for the circuit to function. You don’t need to worry about the second row because they only need to send out 2 power which is default. Also don’t forget to set the HBHF sensors to exclude authorized.

In total, this circuit with the 4 sensors will cost you 129 high qual and 4 tech trash. It takes 28 power to run the circuit and while this can be achieved with solar panels honestly I’d recommend getting a wind turbine.

It will save you a lot of hassles with power management and it will give you an excess of power for anything else you want to connect to the circuit.