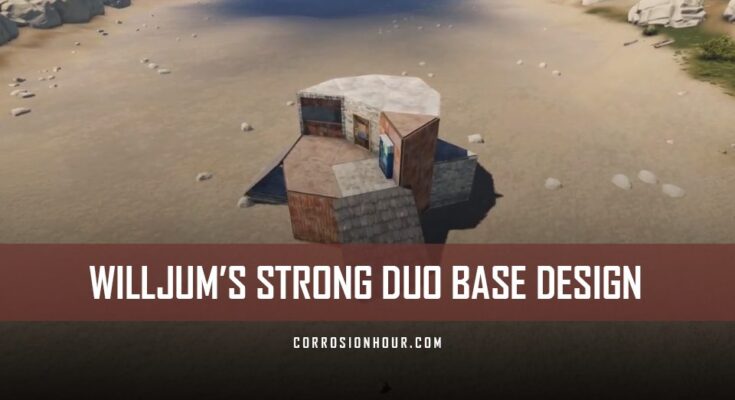 The Willjum’s Strong Duo RUST base design video is provided by our partner Willjum.

This base was intended and designed for vanilla-based servers and supports a small group of up to two players. This base utilizes a bunker for securing loot within fully armored walls while maintaining a very low upkeep cost.

Bunker entrances allow players to create low resource investment bases with a high return when it comes to required raiding resources. Bunkers often take advantage of game flaws and allow players to build them into their overall designs. One major advantage of a bunker entrance is that you can build them without needing to set up conventional doorway systems and can pass loot through the walls into the bunker using unconventional methods.

Door block airlocks allow players to open their doors without risking enemy players going deep in the event the base owner dies. These types of entryways are very strategic and should become second nature to all RUST players.

One additional advantage is that base defenders can open these doors to gain quick and sometimes unexpected peeks at enemy players.

Lowered foundations sections can be used to reduce the cost of a base design while providing additional storage at no extra cost to the overall base build. When using objects such as furnaces to fill in the negative space, the furnaces will act as an uninterrupted floor that allows players to walk over them as if there were a floor placed there.

In addition, objects placed in lowered foundation sections can still serve as a blockade mechanism should the base be raided. Players can also use these sections to plant crops and hemp.

This RUST base design will cost approximately 40 rockets to raid directly to the tool cupboard and over 40+ rockets to access the entirety of loot spread throughout the base.

Someone in one of my Discords requested we do a base, so I thought I’d film one.

This one is much smaller than the last base I built. It’s cheaper, but it’s actually stronger. It requires 40 satchels to raid the base and that’s at the minimum.

It also involves a little shop and lots and lots of garage doors. You are going to need the garage door blueprint for this base. You could use double doors, but it will make it a much easier base to raid.

And talking about Discord, I’ll be setting my own Discord group up, and I’ll put links to join that server in the description below. If you’ve got any clips that you want to be put in the video, or if you’ve got requests for another video, make sure to join the Discord and let me know.

If you haven’t seen the last video, you might not know how to use these bunkers. Simply what you do is put your resources into the top two boxes that stick through the armored wall. You then type f1 kill, spawn in the sleeping bag inside the walls, then move the loot from the boxes into either the tool cupboard or the boxes below it.

This means that raiders will have to blow through the armored wall to reach those two boxes. One of the best things about this base is it has very low upkeep costs.

The only thing that might be a bit difficult for a solo is 42 high qual a day, but as a duo that’s very easy to get. And now that’s the base covered.

Now onto the build.