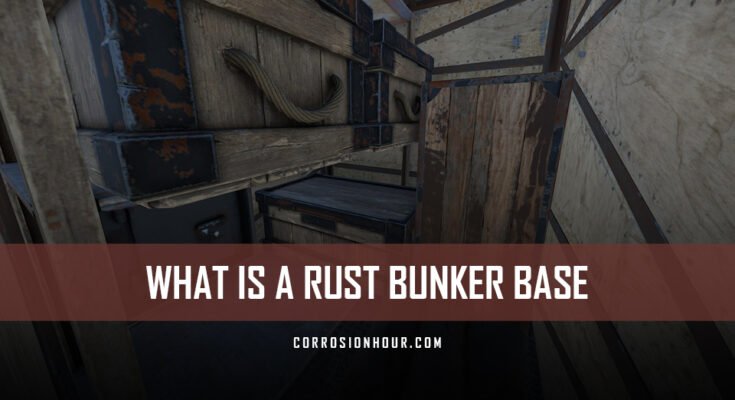 Advanced RUST base design techniques can be key to survival

Building a strategic base, a stronghold of sorts is one of the keys to thriving in most RUST servers. However, you don’t need just any run-of-the-mill base; what you need to build is a bunker base that can help increase your chances of surviving all types of raids.

If you are a new RUST player, you might wonder what is a RUST bunker base and why exactly you need to build one? This guide will discuss the basics of RUST bunker bases and help guide you on the path to knowing all you need about bunker bases, such as their basic design, how to create them, and how they fit into your overall strategy.

What exactly is a RUST bunker base? A bunker base is a tiny solid structure built to store loots, weapons, and tools. One crucial characteristic of a bunker base is its narrow path, making it almost impossible to raid by entering the door alone.

Most experienced RUST players often build it with impregnable walls and without any external doors to make it more expensive for any raider to get inside. The bunker base also has a collapsible wall or floor, which is only supported by low-quality materials, such as wood.

When inside the bunker, you can hit the supporting material with a few hits to destroy it. In the process, the metal or stone wall that it supports tumbles down and opens the bunker. Once the player is outside, they only have to seal it off.

However, there are also simpler bunker designs that don’t adhere to this design. Instead, they are simply used as a temporary base for storing items until the player finds a better spot.

Ideally, RUST bunker bases are designed with the least materials possible while maximizing their durability and defense against raiders. You also want its design to be ergonomic enough to fit most of your deployable items such as boxes, workbench, furnaces, etc.

Because of its simple building requirements, a bunker base is ideal for solo players, duos, and small teams.

Bunker bases have been in RUST since the earliest days of the game. Since then, players have come up with different bunker bases to suit their playstyle, short-term and long-term objectives, and overall strategy.

Some well-known players such as Evil Wurst, Swifty, and Zypic have developed numerous bunker designs many RUST players adopted. Below are some of the different types of bunker bases that have emerged over the years: This type of bunker is the simplest to make because it only needs a 1×1 design and around a few high-quality materials. The primary purpose of a suicide bunker is to store some of your loot simply. It’s a good starting base for solo players and can be expanded later should you need more space.

Suicide bunkers are also created in less conspicuous places, making them harder to spot by your enemies. You also only need to store a few deployable such as your sleeping bag and tool cupboard (TC). The sleeping bag helps you safely respawn on that spot, while the TC prevents the base from decaying.

The main downside of a suicide bunker is that you need to commit “suicide” to enter the base and get your loot. If you want a simple but highly functional base, you should aim to build a stability bunker as early as you can in the game. Thanks to its compact design, this type of bunker gives players easy access to their base, which can be sealed with only a few high-quality materials and some wood.

Stability bunkers are constructed with a twig wall that supports an armored floor. Moreover, stability bunkers are suitable for solo players and duos or a larger team. However, if more than one person is using this base, the last person to leave the base needs to ensure that he seals it off before leaving the place.

Players can also incorporate stability bunkers into a more extensive base to help store other important loots. 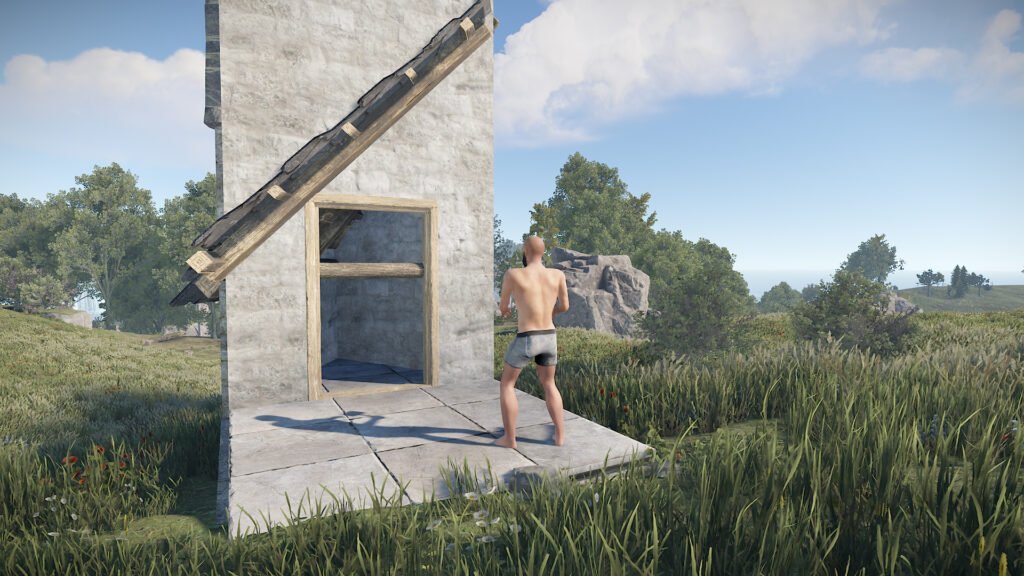 A roof bunker is one of the newer types of bunkers in the game. It has seen numerous iterations to compliment the most recent patch. It’s the opposite of stability bunkers because you have to place a roof next to the wall to cause it to open up and allow you to climb inside.

Some players also use external TCs for roof bunkers since they can be accessed much easier than stability bunkers. If you can strategically place a turret, they can destroy the twig holding the roof and trap anyone who tries to raid your base.

If the raider tries to brute force their way inside this bunker, they will need several rockets and other explosives. Meanwhile, jackhammering and making their way to the TC will take several minutes.

Another clear advantage of roof bunkers is that they are easier to use and seal off. However, roof bunkers also present some issues, such as having a larger footprint and being harder to integrate to a more extensive base.

Why build a bunker base in RUST? Much like other bases, the primary purpose of a bunker base is to store and secure your loot and items from other players. However, there are other advantages to building this type of structure.

Since the early days of RUST, doorways are one of the weak points of many bases. Building a small fortress of solid walls is an excellent alternative if you don’t have a high-tier door, such as a garage door.

Bunker bases also make raiders think twice before attempting to steal from your base. Some of the most complicated bunkers with armored require dozens of satchels to blow it up. Most raiders leave bunker bases alone unless they are sure they will gain something valuable in exchange for a lot of sulfur and other resources.

Another advantage of bunker bases is that they are great for defending yourself from offline raids. You can also make a hidden bunker that stores your most precious loot should you ever find yourself in compromising situations.

Furthermore, bunker bases save you more space than a base with a series of doors. By limiting the size of your base, you also limit the materials you need. In turn, this means less time farming resources which allows you to focus on other things such as scouting the map, raiding, and finishing special events such as airdrops.

Here is a recap of the advantages of building a bunker base:

Why not build a bunker base? Most players prefer to build a bunker base at some point in the game because of its perceived benefits. However, there are some instances that you should not create a bunker base even if you have the materials for it.

The concept of bunker bases usually revolves around matching the cost of raids using door entrances versus walls. However, because it has to adhere to some design restrictions, it also disadvantages people using it as a base.

You constantly have to unseal and reseal the bunker base when entering or leaving the structure. There’s also a limited space inside the base which means you can only place essential deployable items.

Moreover, simple bunkers offer little resistance to online raiders once they have breached part of your base. Building a bunker also requires knowing the current meta to take advantage of the best strategy while not succumbing to exploits.

Below is a summary of the disadvantages of bunker bases:

Things to consider when building a bunker base Many RUST content creators post their blueprints and build methods online, which you can easily follow. But, if you are contemplating whether to learn how to use the bunker base in your RUST gameplay, there are some things you should first consider.

Some of the factors you should consider before implementing a bunker base design include:

1. The cost of the build

This factor refers to how much material does the build actually uses. Things like the number of people in your group and the resources available in the area can affect how fast you can make the base.

2. Strength of the base

You should also take into account how much resources the raiders would need just to breach your base. Building a bunker base is only beneficial if its pros outweigh the cons and whether it can provide enough protection.

3. Weakness of the base

While some exploits on bunker architecture have already been patched, only time could tell if there are some methods that raiders can take advantage of. Hence, it’s best to choose a base design with as few weaknesses as possible.

Finally, if you plan to incorporate the bunker and expand your base later, think about how this will affect the shape of your final base. Nowadays, most base designs incorporate honeycombing or building extra walls around the base that contain nothing. Don’t forget to keep in mind your group’s overall size.

Get to the bunker!

RUST bunker bases have been in and out of the META, but no one can deny that they are pretty helpful in many situations. If you plan to invest more time playing RUST, we suggest that you learn more about them.