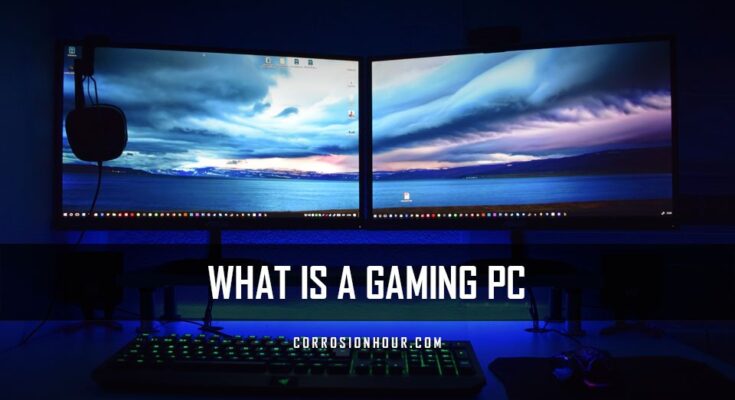 What makes a Gaming PC?

A  gaming PC can easily be described as a personal computer (PC) that has been specifically engineered to play modern video games. This definition can take on many different perspectives, as there are numerous “types” of gaming computers and many different companies that produce components and pre-built desktop computers from budget gaming PCs to high-end enthusiast gaming machines.

While gaming PCs are designed specifically to meet the demanding specifications of modern video games, they also need to simultaneously multi-task to meet additional requirements. These can range from but are certainly not limited to, things such as graphics creation and editing, music recording, video production, and streaming, and common tasks such as surfing the web, listening to music, and participating in video and voice chats.

To meet all of these demanding processes, modern gaming PCs must be built with high-performance components. Modern games alone tend to have higher minimum system requirements, involving but not limited to high fidelity resolutions, above-average memory speeds, large amounts of available storage space, high throughput motherboards, temperature and airflow controlled cases, and high-wattage power supplies. Of all the requirements though, a gaming computer’s most critical challenge is to have a high-performance processor (CPU) and video card (GPU) up to par with the latest trends.

It’s okay, you can take a deep breath. We know it’s a lot to take in, but it’s also not that bad, we promise! There are a few acronyms here and there, but have faith,  you will adapt and learn the ropes quickly.

The primary components of gaming PCs

For many PC gamers, their gaming computers are built with the sole objective of being able to rip through their library of games while being ready for what’s around the corner. To meet this challenge, gaming PCs are engineered to reach for the full potential of their hardware, often by overclocking the processing systems, which puts additional wear and tear on the hardware itself and requires additional measures to keep the processors and system temperatures at a specific temperature range.

Modern computer games require high-performance gaming systems, with advanced graphical processing capabilities in order to run the ever-increasing resolutions, while also keeping the competitive edge. Gaming PCs with dedicated video cards require special heat sinks, case fans, and/or liquid cooling systems to prevent them from overheating when put under all of the stress.

To jump straight into it, one of the key distinctions of a gaming PC is their need to have one or more dedicated video cards. These dedicated video cards often have their own memory and are specially designed to work hand-in-hand with the CPU. It’s important to understand that CPU and GPU must be chosen carefully, to help prevent data flow bottlenecks in the system. In addition, each of these components will require additional cooling measures to be taken, just to keep them from overheating and burning out their processing units.

Gaming PCs will also have optimized and often hybrid storage specifications, designed with performance in mind specifically for gaming applications. The onboard memory must also be taken into consideration, meeting new minimum requirements while also being of a certain caliber and speed to be compatible with the motherboard and CPU. Certain systems will also apply special heat sink casings on the memory modules to help spread and dissipate the heat that is generated.

In addition to this, many gaming computers take special care to pay attention to details, such as cable management for airflow and visuals (case lighting, colored rubber wire coatings, etc). While some systems will forgo your typical airflow systems, which utilize specially crafted and placed fans, and will instead use liquid coolant systems.  Gaming PCs, in many cases, are built with more expensive and advanced technologies that typically extend the abilities of the system, in regards to typical consumer or office computers.

In summary, these advanced components are critical to achieving the status and performance of a gaming PC. For consumer computers, they have specific needs and objectives to be met, such as having a slim profile, being lightweight, and portable for commuting. Gaming PCs are often hunkered down and have multiple monitors set up for multi-tasking. This isn’t always the case, as gaming laptops are also available and viable options for the gamer looking for the best of both worlds. 6 Gaming Microphones to Consider in 2022 5 eSports Monitors to Consider in 2022