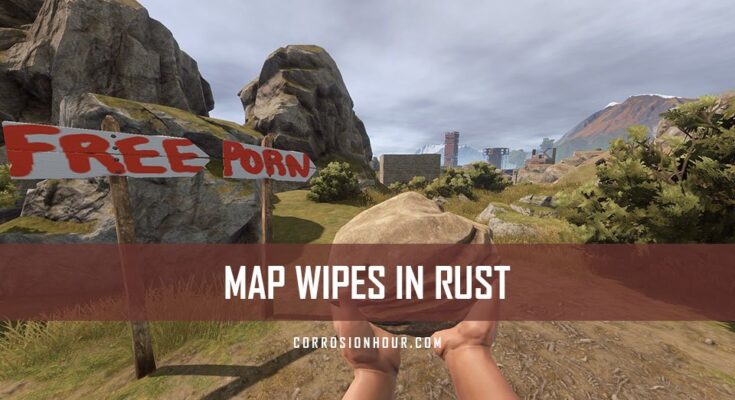 What is a map wipe in RUST?

There are a few different types of wipes that are occur fairly often in RUST, such as Map Wipes, Blueprint (BP) Wipes, and Server Wipes. This post covers Map Wipes.

A Map Wipe in RUST is when the game server has effectively wiped or destroyed all of the entity information that has built up as a result of players interacting on the server. Player made buildings and objects are deleted from the server’s database and resources are reset across the entire map. NPC buildings, rad towns, caves and other natural terrains stay in place, unless the server’s seed is also changed.

Typically, when a map wipe occurs on procedurally generated maps, server admins will change the server’s “seed” number as well, so that the geography and monuments shift around, allowing for a different environment altogether. If the server is not using a procedural map, but a static map such as  “Hapis Island”, the seed is moot and does not change anything.

Why do map wipes happen?

Map wipes can be used to reset the playing field after a build up of player made objects have formed over time. Often a Map Wipe is a fresh start for the server and can be used as a starting point for new players to begin playing on the server with a little bit of an edge against the existing player base. Sometimes Map Wipes occur because of poor server performance, due to the build up of player made entities. These will eventually have an impact on the server’s overall frame rate. Clearing the map of large entity build up can reduce the amount of stress the game server has to work under.

When do map wipes happen?

Map Wipes occur when the game server’s admin performs a manual Map Wipe or is required to “force wipe”, due to a server update released from FacePunch Studios.  It’s typical for Map Wipes to happen on a monthly or bi-weekly basis on many RUST servers. Some RUST servers are also “permanent servers” and only wipe when forced by RUST server updates.

Who can wipe maps in RUST?

The server’s admin role has the ability to perform RUST Map Wipes. There is no option in the game interface for admins or non-admins to wipe the server. There may be mods in development or in private that allow such features via players voting on a date and time in which they want to wipe the map. If there aren’t, go build one.

How do you wipe a map in RUST?

Performing a RUST Map Wipe requires having some form of access to your game server’s administrative section, direct FTP  or file system. The actual process varies depending on your specific host if you’re using the administrative section. Some hosts can set this up to be a GUI driven process.

If you have FTP or File System access, and are looking to manually perform a Map Wipe, there’s just a few steps to follow:

*Note that this will wipe the world data only.

Then reboot the server for new files to take their place.

Additionally, you may want modify the server’s seed number before rebooting the server, if you want to have a different seed. It can be confusing to players who join in between server ups and downs.