Now that you’ve slain the lord of the beasts, Eikthyr, the woods themselves are your newest foe. While you prepare to march on the Valheim Elder’s domain, you will be under assault by the moving forest of greydwarfs, shamans, and brutes. We’ve put together this Elder boss guide to help give you a fighting chance for what lies ahead.

Where to find the Elder in Valheim

The Valheim Elder is an ent-like being, as tall as the trees and made of wood. His home is in the Black Forest. Finding him isn’t too tricky. The burial chambers in the meadows and the broken stone buildings in the black forests often feature a guiding rune that will mark the Elder’s summoning location on the map for you.

Easy to spot, the Elder’s summoning altar is a large stone platform with several stone pillars and a burning fire in the center.

Items you need to summon The Elder

At the Elder’s summoning site, you will need to “burn their young.” The Elder’s young are Ancient seeds, and you’ll need to burn three Ancient Seeds at the altar. Fortunately, ancient seeds are easy to find in the black forest.

Both the green shaman and red brute variations of greydwarf have a chance to drop a seed. But you are far more likely to find one by destroying a greydwarf spawner. The spawners are thick brambles filled with purple smoke and flickering light and only appear in the Black Forest.

If you’re struggling to find greydwarf spawners, you can always wait in the Black Forest until nightfall, where you will be attacked regularly by large groups of greydwarfs. This method can easily net you all the summoning requirements in just a few minutes.

When you’re ready to summon the Elder, toss three of the Ancient seeds into the fire and await the Elder’s arrival.

What you need to defeat the Valheim Elder

Unlike Eikthyr, the Elder’s massive form makes this fight substantially more dangerous. If you are not armored or adequately fed, the Elder can take you out almost instantly. 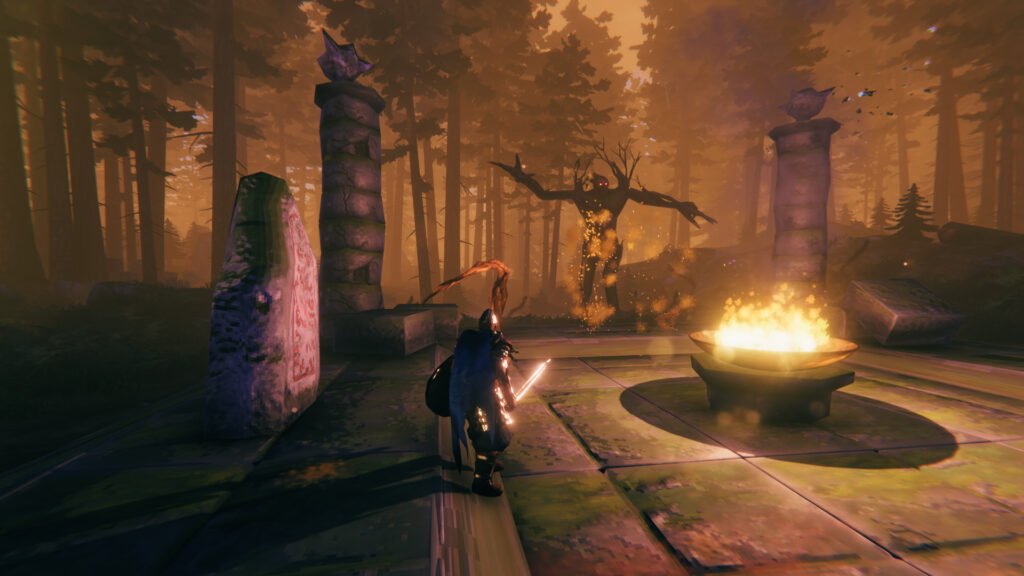 If you choose to fight in melee range, we recommend any of the bronze weapons. Upgrade your weapons as far as your resources allow. Above all, we highly recommend taking the time to create a finewood bow and a bulk supply of fire arrows.

At a minimum, you will want upgraded leather armor. It would be preferable to have a full set of bronze, but it isn’t necessary. If you fight the Elder correctly, you won’t be getting hit.

Since you can mine tin, you also have access to the cooking pot and should be able to produce much more substantial foods. We recommend the Carrot Soup, Cooked meat, and Queens Jam.

If you don’t have enough berries to produce queens jam, a grilled neck tail will suffice in its place. However, you must have all three food slots filled, preferably with cooked food, not just berries and mushrooms.

The Valheim Elder has three abilities and a few extra tricks for which you need to be ready. 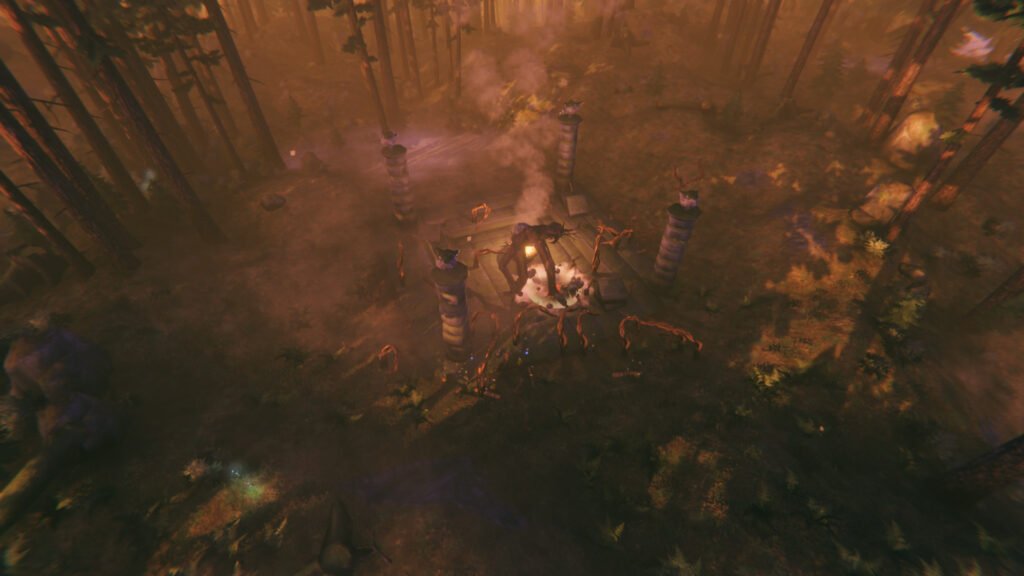 If you’re up close and personal, the Elder likes to stomp the ground with his tree-trunk legs. If you plan on a close fight, it’s highly recommended you bring a shield. Even with a shield, a bit of damage is likely to get through. So roll out of the way when you can. 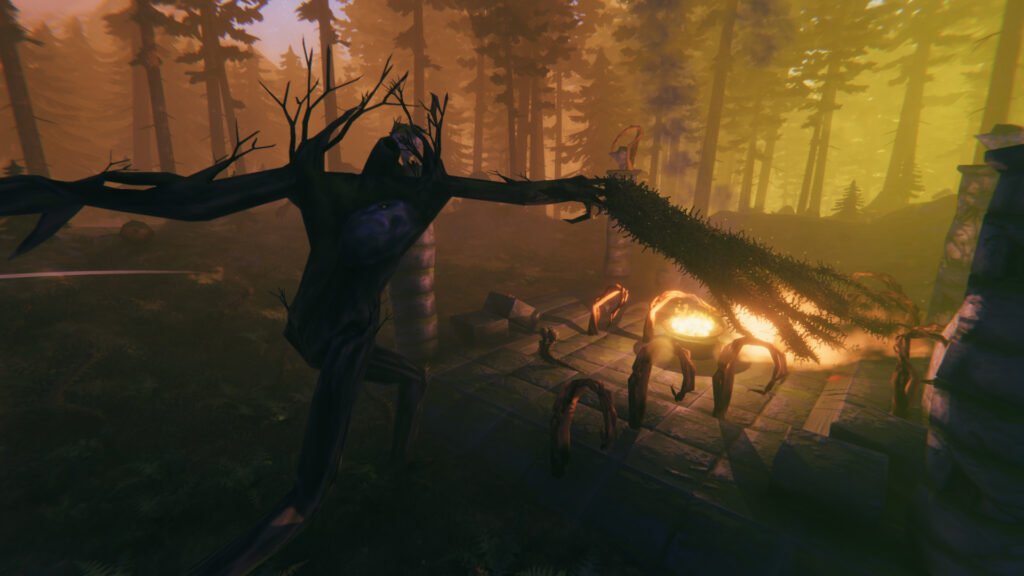 If you’re not close enough to stomp, the Elder will raise his wooden arms and shoot vines at a player. While they look like they curve and change direction, the attack is relatively straight ahead of him and easily dodged. You can block with a shield if you prefer, but the Elder telegraphs the attack, and you can avoid it easily.

Note that the vines will destroy nearby structures and knock over trees, making fighting him in the Black Forest hazardous. Be weary of fallen trees, or if your group is up to the task, clear a small perimeter around the summoning area to prevent tree fall damage from being a concern during the fight. 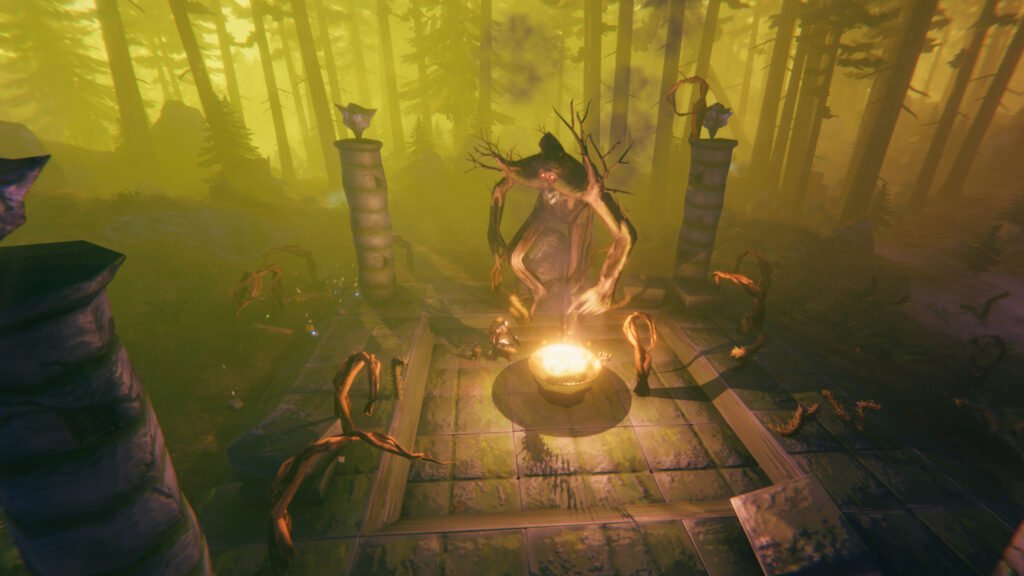 Between vine whips, the Valheim Elder will sometimes summon roots from the ground surrounding a player. The roots act independently of the Elder and whip about dealing damage. They have very little health, and you can quickly take them out. However, you can simply walk out of the roots’ range, as they do not have a slowing effect on the player.

Fighting the Elder makes an awful lot of noise, and whether or not it counts as one of his abilities, both times we have fought the Elder, we have had to deal with extra enemies. Any nearby greydwarfs or trolls can be drawn into the fight, complicating the battle. Ranged attackers should keep an eye out for enemy agro and take them out ASAP.

There are two main ways to fight the Elder. Up close and personal with a shield and weapon is an excellent method, as the Elder will stick to stomping instead of using roots and vines. However, his stomp does substantial damage, and a mistimed block or dodge can end the fight in his favor very quickly.

The much easier method is to keep the Elder at a distance and use a finewood bow with fire-arrows equipped. Like a tree, the Elder is susceptible to fire. Fire arrows also continue to damage overtime for a while after the shot lands.

If you fight in pairs, you can alternate who the Elder is targeting by standing on either side of him, rotating, moving closer, and further back. The Elder will always try and target the closest player, and you can use this to keep him running in circles while you dispatch him with bows.

Alternatively, you can have one player tank him up close so that he only stomps. They are effectively leaving your ranged player free to keep taking shots and keeping other enemies cleared.

The Valheim Elder’s loot and rewards

Defeating the Elder will grant you an Elder Trophy and a swamp key for each player in the fight. The Elder trophy can be taken back to the sacrificial stones and traded for his forsaken boon. The Elder’s Boon is highly situational but still useful. Activating will speed up the rate at which you chop down trees and process wood. 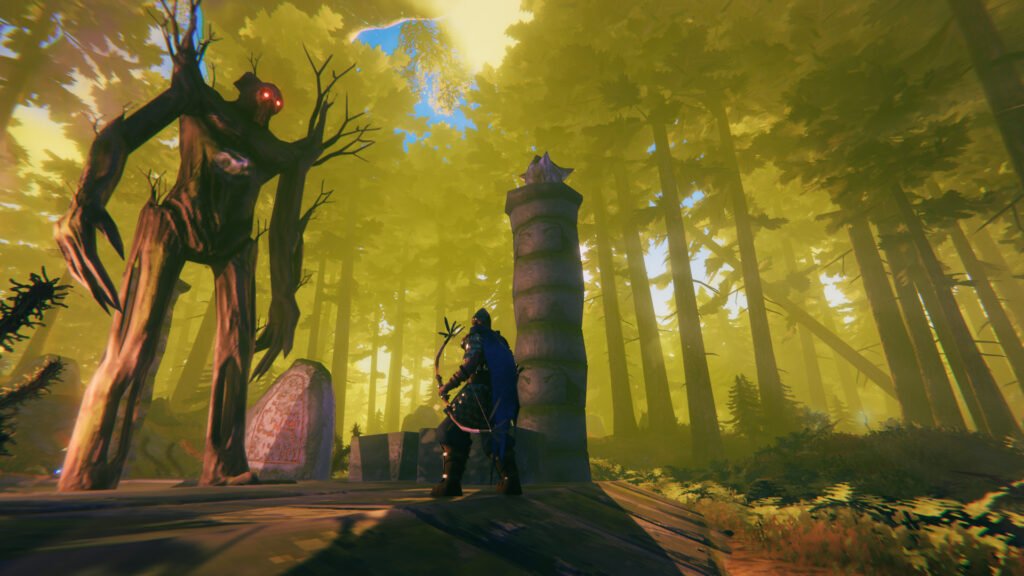 You’ll likely only activate it if you have plans to fell a large area of woods, but it is a priceless ability when you need to do this. Alternatively, you can hang the Valheim Elder’s menacing head on a trophy rack in your base.

The Swamp Key opens the swamp crypts and unlocks the next armor tier, giving you access to precious iron scraps and all the benefits that iron entails. All swamp keys have unlimited uses, so use them as often as possible.

Now that you’ve put the Elder to rest, the woods will relax as well. You’ll no longer get attacked by hordes of greydwarfs. However, we have noticed that since we put the Elder down, we see superior greydwarfs roaming the meadows at night quite often.

Since Elder drops the swamp key, logically, the swamp biome comes next, but the swamp knows this. Now you’ll start getting raided by the armies of Bonemass. While awaiting you in the swamp, Bonemass will send skeletons and draugr to harass your base, as well as the occasional troll.

We consider the Elder to be the first proper boss in Valheim. No offense to Eikthyr, but you can beat him with just a stick. The Elder’s battle requires preparation and a little bit of learning. While the Elder’s by no means the most challenging boss in the game, his damage output can catch you off-guard. So be ready to be hit harder than you have before.

Was this Elder boss guide helpful? If you’re having any trouble with this Valheim boss and need some additional tips, or if you want to join a community of Valheim fans, be sure to join our Discord!