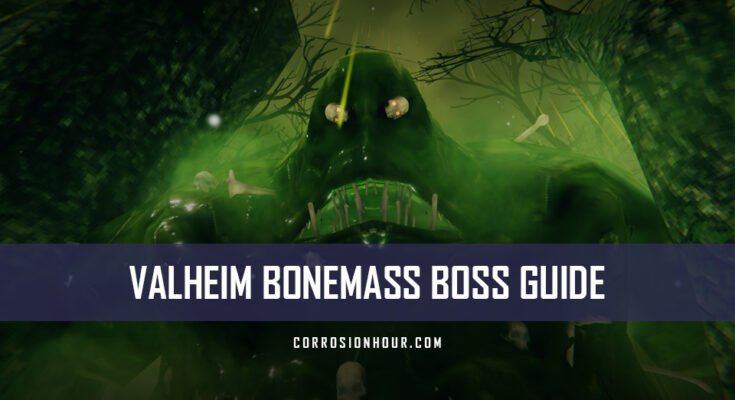 Below the mist and murk, bone speaks to bone, remembering flesh.

Bonemass sucks, we can all agree. He may be the third boss, but he is undoubtedly the most frustrating enemy in all of Valheim.  Composed of goo and the bones of the long-dead draugr, Bonemass presents a challenge, unlike anything you’ve faced in Valheim so far. We’ve put together this Bonemass boss guide to help tilt the odds back in your favor.

Where to find Bonemass in Valheim

Bonemass is king, or gestalt kings of the swamps of Valheim. Head into any swamp biome and find one of the crypts with green fires lit at the doors. Assuming you’ve defeated the Elder, you should have a Swamp crypt key. 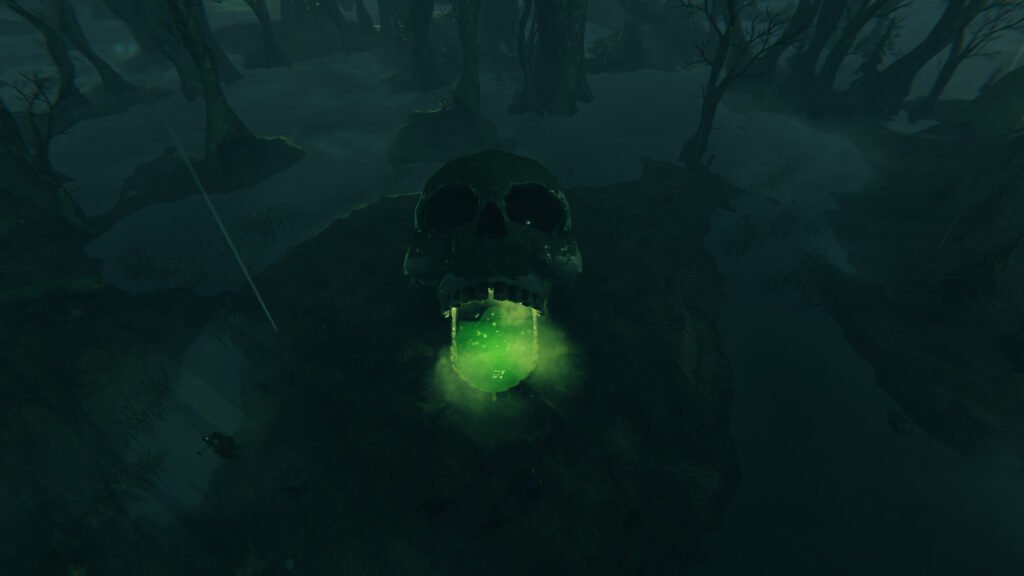 Along with all the iron and goodies you’ll find in the crypts; most will also feature a glowing red guiding rune. When inspected, the glowing rune will point you to the Bonemass swamp of your world seed. It’ll be marked on the map for you and can, unfortunately, be a bit of a hike or sail from the center of the map where players tend to spawn.

How to summon Bonemass

While you’re down in the crypts looking for iron or the guiding ruin, you’ll be picking up withered bones from the muddy scrap piles or just lying around the place. It’s worth picking them up whenever you see them because you’ll need ten of them to summon Bonemass.

Once you have ten withered bones, head to the Bonemass marker on your map, you’ll see a large green skull rising out of the swamp with a pool of green goo in its maw. Drop in the withered bones and get ready to fight the Bonemass.

What you need to beat Bonemass 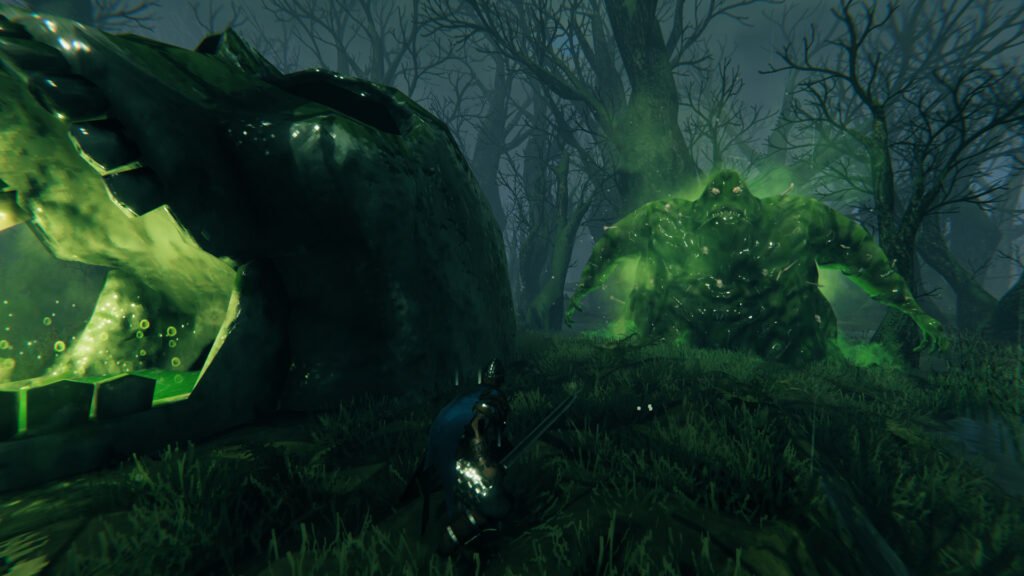 Bonemass is highly resistant to pierce and slash damage. So you’ll need to bring blunt weapons. The first time we fought to Bonemass ended in tactical retreat, he couldn’t kill us, and we couldn’t kill him, no matter how cool our swords were. We highly recommend the Stagbreaker, bronze or iron maces, or the Iron sledge.

Since you have to fight Bonemass head-on, we also recommend bringing a shield. Considering Bonemass’s considerable strength, it’s worth crafting the banded shield made from iron.

It’s also a good idea to have upgraded your weapon and shields as far as your resources allow, as Bonemass has a substantial health pool.

Bows and arrows are practically useless against Bonemass. Flame arrows are incredibly underwhelming. Overall it is better to preserve your stamina for dodging and sprinting than to shoot arrows at Bonemass.

However, a bow can help deal with the additional enemies that Bonemass summons during the fight.

Bonemass hits like a truck, and we highly recommend you upgrade to iron armor before fighting this boss. On top of Bonemass’s damage, you’ll also be taking occasional arrows from enemies the boss summons, so high damage resistance is the name of the game.

Since you’ve been visiting the swamp to farm iron, you should have a wealth of swamp materials to cook. Hopefully, you’ve also started your farming game and have a lot of turnips to spare.

The ideal food selection is Serpent Stew, Sausages, and Turnip Stew. It can be tough to have serpent meat on hand reliably for serpent stew. So if you can’t get the materials, cooked fish or even cooked meat can take its place on the menu.

The essential preparation for Bonemass is the poison resistance mead. We can’t stress how vital this mead is. Most of Bonemass’s attacks and other swamp creatures’ attacks will do poison damage in varying amounts. Have your fermenters churning these meads out while you do your iron farming.

Secondly, you may want some medium healing mead. While not as critical as poison resistance, these pots can be helpful in a pinch when you see the poison counter pop up, and you feel like your health bar isn’t quite up to the challenge. 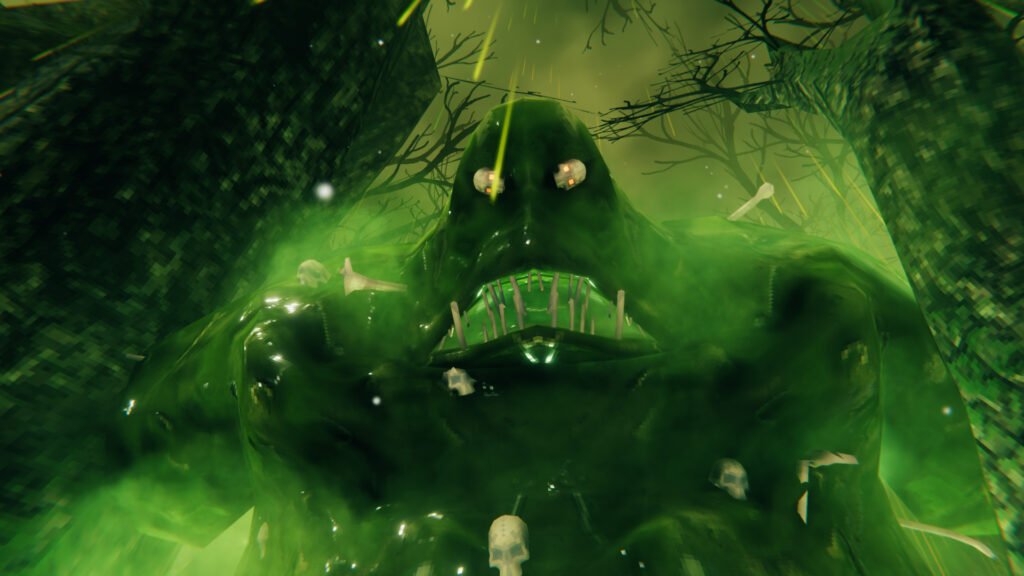 In this Bonemass boss guide, we walk through the three abilities that he will use on rotation, mostly regardless of player proximity.

Bonemass will go for the classic haymaker, winding back and swinging with a closed fist if you’re close enough. This strike will do massive damage, and you must block the attack. The hitbox reaches a little further forward than you would expect, making dodging unreliable. If you’re brave enough, try to parry the attack, to take even less damage, and put Bonemass on the back foot. 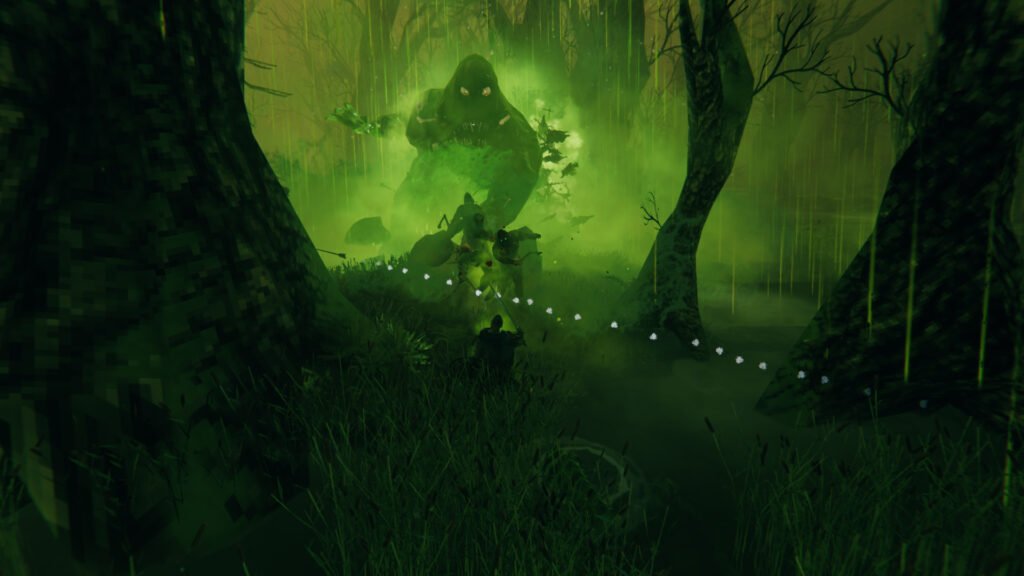 He’s made of poison, and he puts that to work. If he grasps his guts and starts to heave, you need to run. Bonemass’s cloud will pour out in front of him and will linger on the battlefield. When he does this, you need to either move behind him or at least 20 ft from his front. The cloud will damage, regardless of your poison resistance, so we don’t advise simply tanking it. 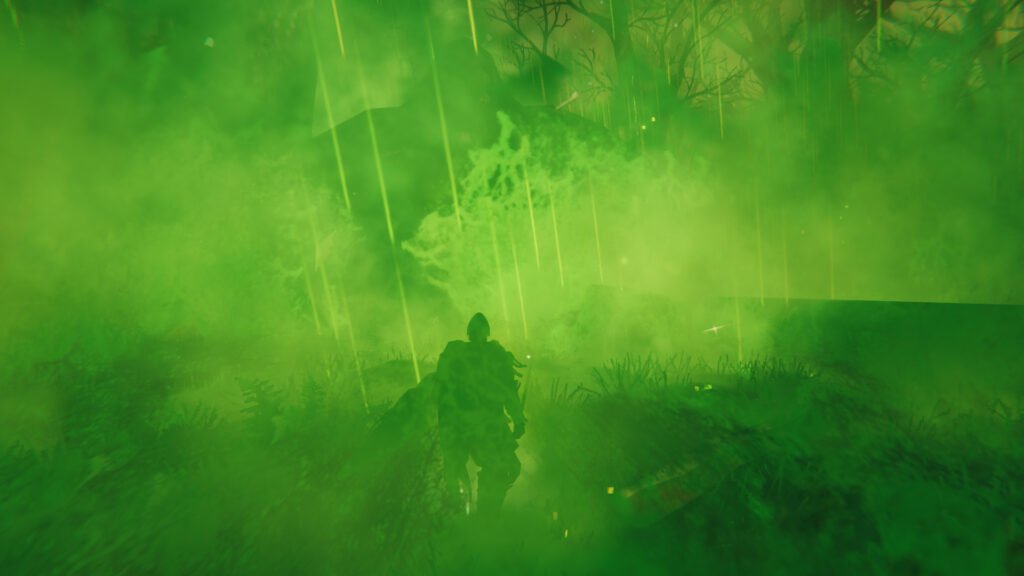 Being gross as he is, Bonemass will reach into his armpit and throw whatever clump of goo he scrapes in your general direction. His toss usually goes beyond the players’ range, but he summoned enemies to attack you from behind. Each clump he throws splits into a group of skeletons or blobs. Often at least one of the skeletons will have a bow, so be ready for arrows from behind. 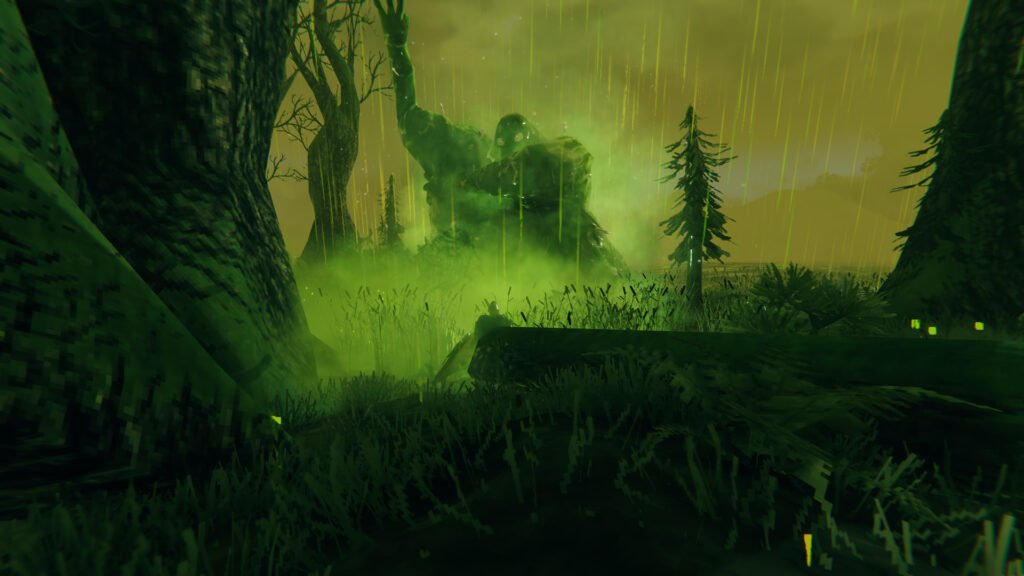 No amount of intuitive game sense or skill will save you for the Bonemass fight. Preparation is the name of the game. Our first fight with Bonemass was going well until we realized all our weapons would break before the battle ended. In a war of attrition, Bonemass wins.

You must bring blunt weapons, and you must have poison resistance. The foods you’ll need to have enough stamina and health to defeat Bonemass take a bit of work to prepare. So prepare you shall. It’s also a good idea to have the Eikthyr power active; however, as Bonemass is a long fight, you’re not likely to have the buff for the entire duration.

If you’re having trouble fighting Bonemass in the swamp, you can level the playing field, literally. Bring a hoe and some stone and flatten the area as much as is possible. At the very least, try and fill in the potholes that will cause you to swim when you fall.

To fight Bonemass alone is pure combat basics. Get close enough to trigger his swing attack, parry, and strike. If he goes to do his poison cloud, move out of the way before spilling the gas. If you can get behind him, all the better. Try to get your weapons hit-combos in, but don’t get greedy. If you feel like you’re over-extending your attacks, stop and block. It’s better to mitigate the damage than it is to recover.

While it may be tempting to get a few extra hits in as he prepares to summon additional enemies, it’s wiser to head to where he throws his slop ball, so you can dispatch them quickly and return to the fight.

In a group fight, you can assign or alternate tanking players. If one person stays right up in Bonemass’s face, he will target only them with his cloud and swings. Have someone comfortable with blocking and parrying stay beside him while the others take turns stepping in to damage him from behind.

If you have three or more teammates, it’s a good idea to designate a player to deal with the additional enemies so that only one player is distracted to fight the skeletons and blobs at a time. 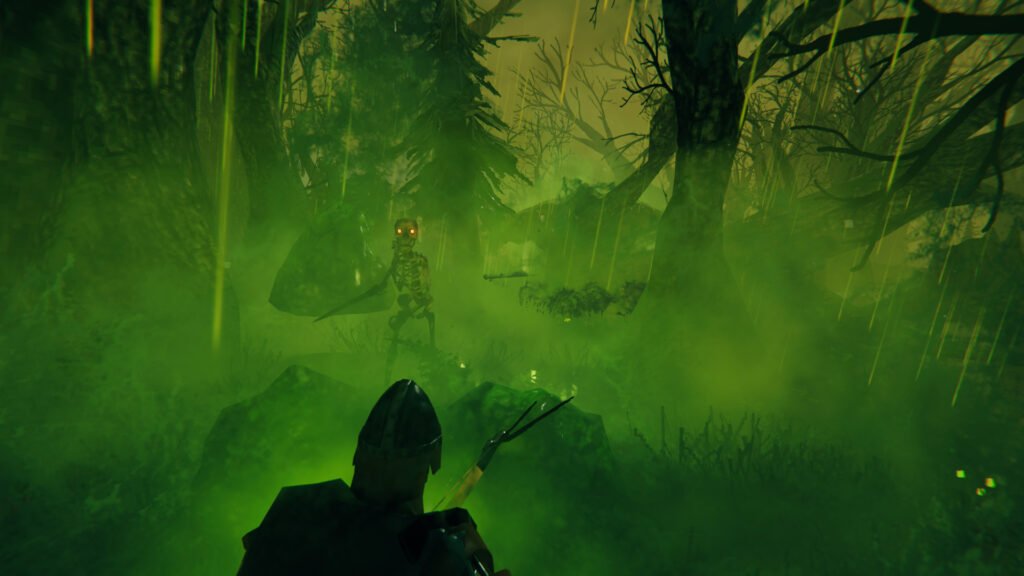 Finally defeated, Bonemass will drop a trophy and a wishbone for each of the players. You can either take the trophy to the sacrificial stones and hang it up for his buff or take it home to put it on your wall.

The Bonemass buff is a substantial increase to your piercing, slashing, and, surprisingly, blunt damage. Overall it is a considerable reduction to physical damage, which can help the plains biome.

The Wishbone can be equipped with the player’s accessory/belt slot and will give you the ability to detect buried treasures. With the wishbone equipped, you will be alerted to literally buried treasure chests. Still, most importantly, it will let you detect buried silver and iron nodes—an essential tool when moving into the mountain biome.

Defeating Bonemass will put a stop to the swamp creature raids. It will, however, draw the ire of Moder from the mountains, who will send drake and freeze the environment when a cold wind blows.

While the draugr have given up, defeating Bonemass has thoroughly frustrated the skeletons, who will now show up in a skeleton surprise. Since the surtlings also call the swamp home, they will join in the raids when there’s a smell of sulfur in the air.

Bonemass, we won’t miss you.

Between the swamp, the poison, and the 10-minute long fight, Bonemass will stand out in everyone’s memory as Valheim’s most frustrating boss. He’s not too tricky once you’re accustomed to his attacks, but he takes a lot of time to prepare for and a lot of time to fight.

To get to a point where you can defeat him, you’ll have been farming crops, trawling mud for iron, and battling the swamps of Valheim, making beating him into the ground all the sweeter.

Was this Bonemass boss guide helpful? If you’re having any trouble with this Valheim boss and need some additional tips, or if you want to join a community of Valheim fans, be sure to join our Discord!