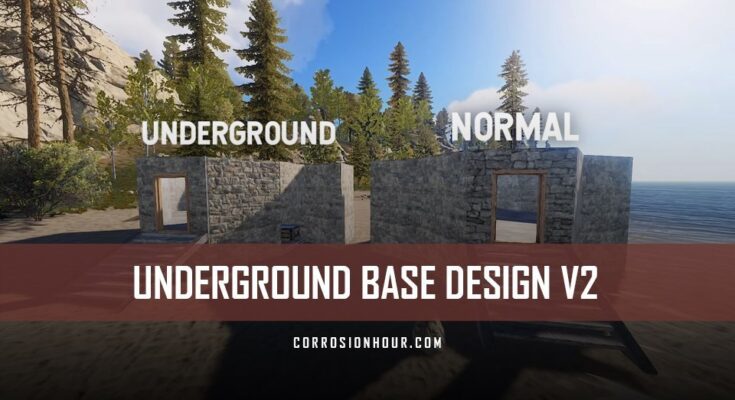 The Underground Base Design V2

This RUST underground base design video is brought to you by our partner Jfarr.

The whole purpose of this technique is to fool raiders into thinking they have hit your loot stash and leave your base, without ever actually exposing your hidden loot rooms, which are right under their feet the whole time. The more vertical the base is, the more likely the base raiders will assume the loot is stored in the higher level floors.

A lot has changed since my first Underground Base Design video. Many of you might be wondering if an underground base design is still possible in 2019 and the answer is yes.

Let’s get straight into what this base design looks like and how it functions, then later go into detail on how to build it.

How the Underground Base Works

This makes it very hard, to almost impossible, for a raider to identify an underground base. The whole point of an underground base design is to hide your loot in what the raider’s think is just the foundations and to give the illusion that the loot is actually upstairs or somewhere else within the base.

This underground base design uses the stability of the building to allow you to enter and leave the underground part of your base, by allowing you to cover up the hole in the floor when logging off, but also letting you open it back up when logging in. By breaking a twig wall which is holding the ceiling in place.

I’ll go into further detail in how this works in the build portion of this video. In the underground portion of your base, you can still place a chest, auto-turrets, shotgun traps and few of the useful items to help you down there. This is where you’ll want to store your most important loot, like guns and resources.

But, I’d also recommend that you have a chest room upstairs, or above the underground floor, to give the raiders some form of loot to let them think the loot isn’t hiding somewhere else.

Building the Underground Base

You first want to look for a flat or concaved piece of land. This will help hide the underground portion of your base. If you build on a slope, one side of the base will appear to stick to far off the ground and might give up that the base has an underground section.

You’ll now be left with the hole that will be used to enter and exit the underground part of your base.

Next, you’ll want to put up walls and ceilings around your base and leave a hole in the roof to put some stairs and later a hatch. This will let you expand your base in the future and will also add to the illusion that the loot might be further up in the base, rather than down. The same will be down with the circle base design.

Now with the circle base, the stability will be a bit different and you’ll want to place the half twig walls mirroring each other. Once mirrored start placing the ceilings down in the order I’ve shown in the video and decide on where you want to get in and out of your underground base.

This will mostly be determined by the stability of the first half twig walls you place down so you will have to move those if you do not like where your hole is going to be. Once you’ve decided on the hole which will be your entrance and exit, place a half twig wall opposite of it to allow you to put a ceiling over the second hole.

Now you have your main hole which will be used to enter and exit the underground base. To cover up this hole when logging off, you’ll want to jump down inside your base and place a half twig wall to give it additional stability allowing you to place a ceiling and either upgrade it to stone, metal or armored.

When you log back in and you want to leave the underground portion of your base, all you have to do is place the half twig wall and the ceiling will break due to low stability.

Now it’s about time to place a tool cupboard down. You’ll want to hide it in a honeycomb or separate room so that the raiders don’t gain access to your base too easily. Once you have the walls, ceilings, foundations, and tool cupboard down, you’re ready to start filling your base with chests and furnaces.

The underground part can be filled with whatever you want and it allows you to swap out traps for more storage space. It’s up to you how you want it to look and feel. But I would recommend being smart about how you place your chests since you have limited space and if you’re with many people it can get filled up quickly. That’s why I suggest putting a lot of loot upstairs that you don’t care about losing, in case you’re raided.

This will help the raider think they got to your loot and can now leave with the goods. Also, don’t forget about putting traps all throughout the underground part of your base. Don’t put too many chests down and save some space for auto-turrets and shotgun traps. This will be your last resort if raiders do manage to find the underground section of your base.

If you do think you might be running low on storage space from the two designs I showed you, there’s a simple fix to your problem. Just make the underground portion bigger when building the base. This underground technique can be incorporated into a massive or small base, depending on your needs and the ability to sustain the base.

The half twig wall which is being used to hold up the ceiling over the entrance and exit hole cannot be broken from the outside. Even if the raiders use a flamethrower, rockets, or C4 directly above where the twig wall is, it will not take damage. This means you do not have to worry about the raiders accidentally destroying that twig wall and finding your underground base.

It’s also a good idea to rename sleeping bags to raid base, temp base, or farm base, to make it seem like you don’t have much loot in the base. Since it’s not going to work really well if you incorporate it into a big base and have a sleeping bag saying temp base or farm base.

I should also note that you cannot place a sleeping bag in the underground section of the base. This means if you lock up your base while you or a friend are not underground to destroy that twig wall, you cannot destroy the ceiling. Which will lead to you being locked out of your loot. There is a fix to this problem, but I wouldn’t recommend it since it has the ability to give away your underground secret if the raiders destroyed the wrong wall.

To implement this fix all you have to do is extend the underground section into what would appear like the honeycomb of the base, but instead of putting a ceiling on it, which would block the bed placement, you can just leave it open.

The problem is if the raiders decide to rocket or go through the side of the base, it will be completely open to the underground section, so this is only recommended if you need a sleeping bag to get to your underground loot or think you might forget and lock yourself out of your base.

It would be best to also upgrade your base to sheet metal and armored, not only for the extra protection and durability but for the decay rate. If you do get offline raided and they destroy or take the content out of the tool cupboard, your base will start to decay.

A stone base will decay in 5 hrs, while a metal base will decay in 8 hours and an armored base in 12. This will give you an extra 3 to 7 hours to log back in and get the resources needed for the upkeep. So your underground base doesn’t decay and get exposed.

Now you know how the underground technique works, you can now incorporate it into any base design, which can support it or expand on the bases I’ve shown you today. Really as long as your circle base is bigger or equal to three layers and your square base is larger than a 2×3, you can incorporate an underground section.

Who’s to say you can’t have a massive base and be a big clan and not just have a small underground section to hide your C4 and rockets while the rest of your loot is in crates upstairs. If you do get raided, you might lose some stuff but you still keep the things that are most important to you.

I hope this video has helped you in surviving in rust and given you another way to mitigate offline raiders or big clans which you can’t fight against.

Thanks, guys for watching and I hope to see you in the next wipe.