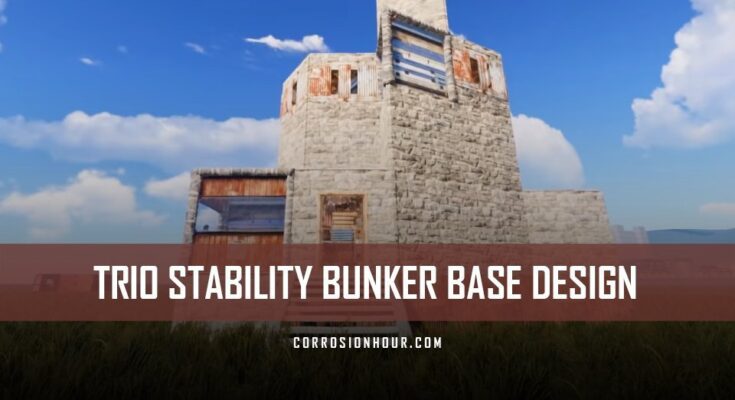 The Trio Stability Bunker Base RUST Base Design, was created by our partner Everherd.

This 3-story duo / trio RUST base design  features a bottom floor loot bunker, a second floor living area and a third floor shooting floor. The shooting floor can be customized to suit your play style or preference, with external turrets if desired.

The bottom floor contains the TC and storage for important loot, as well as sleeping bags for each team member needing access to the bunker.

With that, enjoy the video!

Yo what’s up, it’s your boy Everherd. And today I am going to bring you this duo/trio base. Sit back, relax and enjoy.

So here’s the base tour. So as we come inside we have a nice little airlock. It won’t be like this in the final build since I decided to change up a couple of things before I released this. I’ll mention the things that I deleted since they were either just too costly or I just didn’t like them.

So here’s our main bunker, behind this wall. We can simply break this and go out. There are bags inside so we can simply spawn in and break that wood. Right here is our TC. Now, I forgot to mention that this base will cost you around 22k stone, 6k wood and 8k metal.

So right here, we can go up to a second floor. This will be our main living section. We’ve got a couple of lockers and a lot of boxes. I wouldn’t recommend you keep your best loot here, obviously you would keep that in a bunker. We got our workbenches, repair benches, research tables. From here we can go up to a shooting floor. Now I decided to scrap the turret idea you can put it back in if you like it, but personally I think that it takes just way too much effort. Also, it’s a lot more enjoyable to just shoot somebody down.

So to start off, you want to place a two by two on the lower level, and then surround it with foundations like that. You want to place those squares right here. Now you might notice that this is a different footprint from what I’ve shown in the base tour. You want to upgrade these to sheet, and these ones we want them armored. These ones you can just leave them stone, you can upgrade them if you want to. So the inside really doesn’t matter, you can just make it stone, it really doesn’t matter at all. Surround them with walls like this. So this base is going to be at least three walls from each side. One of these sides I definitely recommend you upgrade to armored. You want to upgrade this wall as well as the entrance wall. It’s not necessary, however I definitely recommend it.

You might want to add honeycombing to the top. You want to make it sheet metal, since I feel like that is the most common method for raiding, you either through doors or you raid from above depending on the size of the base. Now this is going to be your starter unit. So you just want to set up the base, have a little workbench on one side. You don’t want to place your stuff before you place your door. You wanna know why? Because Facepunch decided that it would be good to make an update in which they removed the idea of placing doors through stuff, which is simply annoying. It makes it annoying to build. It literally doesn’t change anything. You can do the same stuff, you just have to keep it in mind.

Now you don’t need to place any shelves, however, I think those look quite good, so I definitely want to go with my shelves. Now down here we want some small boxes. You can definitely place a large one, but I think that this looks better. Now I have my barbecue over here and you want to place as many bags down here as you have teammates in your group. Otherwise, someone won’t be able to access the bunker which just sucks for everyone. You don’t want to have to get on just so your friend can get his AK out of the bunker, that’s just straight up annoying.

So now you place your airlock. This is your basic footprint. Now when you place your doors in, this is a finished starter. This is how your starter will look. It’s not the strongest starter, but it’s always something. I will be using BGrade, so this layer of honeycombing we want it sheet. As well as this side. You don’t want to place in that one wall. I didn’t make a mistake, this is going to be a shoot up. Now the rest of this honeycombing you can just make it stone. Seal it up.

OK so this stuff isn’t very complex. I will put in a little bit of an info announcement. I know I haven’t been making many videos recently, I mean, that’s classic Everherd, make one video a month. Well like, um, I will hopefully be able to do more cause summer is coming up and I won’t have school and I will be able to focus more on my channel. Even in the nearest future, I might not release a lot of videos since I have school for about 3 more weeks. OK, let’s get back to the video though.

We want doorways like that. That’s gonna be our new airlock, I decided to scrap the other one as I said since it wasn’t all that good. This is where our living section will be. Now this honeycombing we can just make it stone. It’s not all that important.

Placing your lockers, two will definitely be enough. If you don’t like lockers, you can always place in boxes or furnaces or basically anything. Some people including me like lockers, I mean, they’re quite simple, you just put in your stuff, then pull it out. Since this is a trio base, you can always just use one locker as farming gear and one as pvp gear, then you can just use one button to switch out.

Now our base is almost ready. We just need to add one thing. Also, this is how you would close it up. You would simply place a twig wall right there and upgrade it to wood, place a floor and upgrade it to armored. Now, you can always make it stronger by placing in some more foundations like this. But that makes it look suspicious. So what you can do is just add some walls. I’d recommend to make them stone, since it doesn’t really matter, you also want to upgrade that wall to armored. That is important as well. Now you can make this stone or sheet, however stone is basically enough. It doesn’t really add all that much.

There we go, that is pretty much the finished build. If you guys enjoyed this little video make sure that you check out my other videos, like the channel, subscribe and join my discord server. See ya.