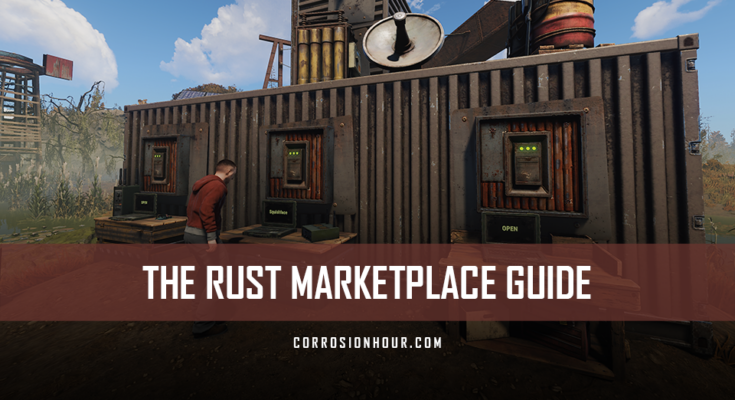 The RUST Marketplace and Delivery Drone

The RUST Marketplace was introduced in the February 4th Softcore Gamemode Update. This feature allows players to access shops and vending machines from around the map via the market’s computer terminals. Automated delivery drones will fetch and return purchased goods on behalf of the player, preventing them from making the dangerous journey across the map and potentially losing everything.

If you’ve grown tired of the endless commute to and from shops and can spare a little extra Scrap, then the Marketplace may be just what you are looking for.

This guide will cover the following topics:

What is the RUST Marketplace?

The RUST Marketplace terminals provide players a safer way to purchase goods. Since they are located within safe zones, players can freely access the terminals under the same no-combat protections as shop vendors and Vending Machines in these areas. However, keep in mind that using a terminal is not without risk.

For starters, all shops and vending machines are now easily accessible to everyone, meaning that any purchase could potentially mean highly valuable loot to be gained or lost in a PVP encounter. Additionally, your name appears prominently on the screen when you have an active purchase and when your delivery is awaiting retrieval. Should potential enemies be keeping watch on the terminals, they will identify the delivery owner with little effort. These are just a few things to keep in mind for those thinking of using drone delivery to move loot around.

Where to find Marketplace Terminals?

How does the RUST Marketplace work?

The RUST Marketplaces have three available terminals for up to three players to use simultaneously. You will be able to distinguish an open terminal by the text on the monitor. If it reads “OPEN”, then the terminal is available for use. If it displays a player’s name, then a delivery drone is either en route with that player’s purchase or, the purchased goods are currently stored in the terminal’s storage bin awaiting the owner to return for it. There is some strategy in this bit of knowledge, as I mentioned earlier.

To make a purchase, walk up to an open terminal and interact with the E key. This action will bring up the game map. Locate a shop or player-made vending machine marker on the map to bring up the shop inventory window. This window should pop up on the lower-right side of your screen. Select the item and quantities that you wish to purchase. Do note that a delivery fee will be calculated for your purchase, so make sure you have extra scrap in your inventory to cover the cost.

When you accept the purchase costs, you’ll notice a little drone icon appear at your location on the map. This icon will travel the map in search of the shop that you purchased from. Once the drone has picked up your delivery, the icon will travel back to your location to deliver your items. Meanwhile, when you accepted the purchase, your name appeared on the computer screen, which denotes to others that you have an active delivery. Should you need to leave the terminal while waiting on the drone to return, it will be locked to your player.

Once the drone has returned to the market terminal, your items will be deposited in that terminal’s storage. The computer screen will continue to display your name and hold onto your things exclusively for 10 minutes. If you click the E key to open the shop again, you’ll see your purchase in the shop’s inventory. Loot the shop storage just like any container.

What are the drones about?

The drones are currently NPC-only entities whose sole purpose is fetching your purchased goods. They cannot be bought, unfortunately, nor can you interact with them at this time. Also, drones cannot be damaged by player weapons, nor blocked by players’ bodies, so give up the idea of preventing one from accessing a vending machine or shop using firepower or self-power.

Drones can be blocked by walls and other base features, so vending machines must be publicly reachable to be accessed by a drone. This means drones cannot access a vending machine inside a walled-in bunker, for example. If you have a high-external wall compound and place a vending machine in the open air, you should be good to go, I suppose.

Wrapping up and checking out

The RUST Marketplace offers a refreshing respite from the usual death march to retrieve goods from shops around the map. Not only is the drone delivery time quite fast in comparison to flying, driving, boating, or horsing your way around the map, it is also a great way to save on fuel and durability to vehicles just to grab an extra jar of pickles.