For your quality of play and faster reaction time, try advanced keybinds in RUST.

So you may have read about the RUST keybindings in the past. Perhaps you even tried copy-pasting a few into the console. Our last keybinds guide outlined just a few of the common and most useful RUST keybinds that people request.

However, those keybinds only scratched the surface of what’s possible in terms of customizing your controls in RUST. In this guide, we’re going to outline how keybinds work and how to make your own custom RUST keybinds.

With keybinds, you can combine multiple keypresses into one, toggle settings and player movement modes on or off, and more.

Using the console in RUST

Many players are familiar with the console in RUST. In just a few short hours of play, you’ve probably been introduced to the concept of F1-> kill. 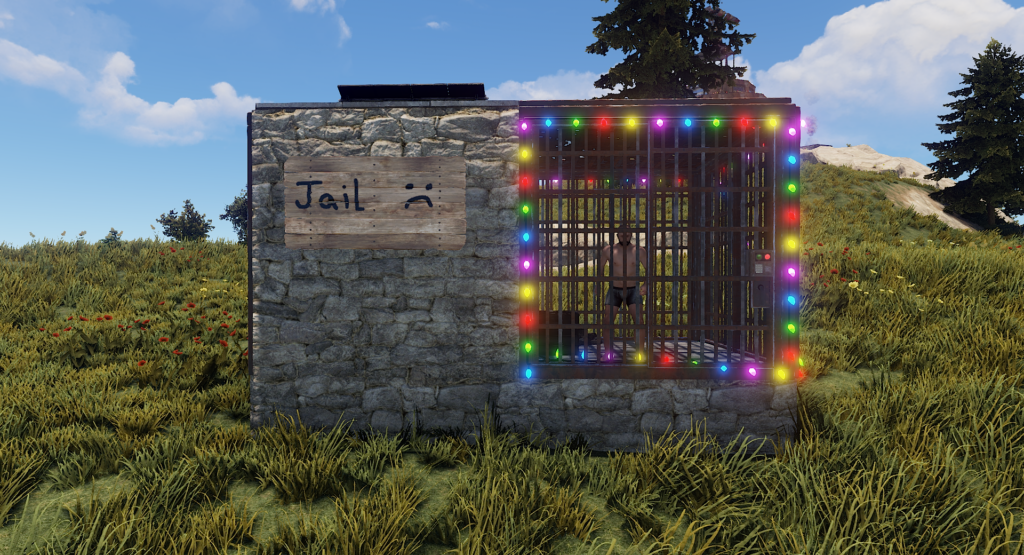 The kill command is a prompt that will terminate your character. Typically the kill command is used when you’re stuck or knocked down and don’t want to wait to bleed out, or you wish to respawn somewhere else random on the map.

Press the F1 key, and you’ll see a drop-down screen with a text window running along the bottom. At the top, you’ll see several tabs. You won’t be able to interact with most of these tabs unless you have server administration rights.

For the time being, make sure you have the first tab selected, labeled ‘console.’ Anything you type into the console is the same as if you did it by pressing a key in-game or changing a setting in the games menu. 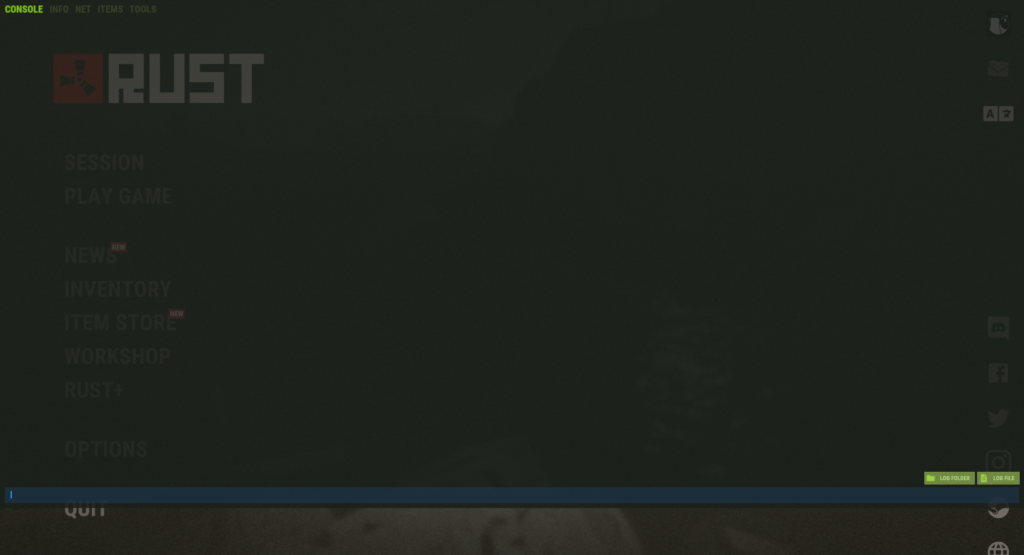 If you want to try it out, you can type kill into the console line and press the enter key. Typing this prompts the game to run the command line, which kills your character. There is a broad array of console commands that we will list. But in the meantime, let’s take slow steps through your first keybind.

The essential command line to create a new keybinding is the phrase ‘input.bind’, which you can shorten by simply typing ‘bind.’ The bind command tells your RUST client that the key you choose will change to perform the function that will follow it.

Without the parenthesis, the console line will look like the following.

With either one of those command lines, you tell the console to bind the k key to the command line kill. You now have a keybinding that will kill your player if you press k on your keyboard.

Kill is a simple keybind to set up because the kill command doesn’t require any extra parameters. It only tells the client to run the kill function.

Many parameters for RUST commands are limited to True / False. In contrast, other parameters are on a scale. That scale sometimes changes to between 0.0 and 1.0, while others will retain their absolute values.

The player control parameters are as follows:

If there is an in-game setting you wish to change, the easiest way to figure out the necessary command line is to open the console and use the command ‘find’ followed by either the whole or abbreviated name setting.

The find fov command will display all of the commands for settings about your field of view (FOV) in the console, graphics.fov.

True and false parameters in RUST

A server doesn’t know whether you are crouching in-game unless your game client tells the server, which gets the information from your keyboard. While it may sound complicated, it is much simpler if you remember that your RUST client is continually asking your PC questions.

If you want to crouch, press the left ctrl key, the client changes your crouching status to ‘true,’ and the server responds, making your character crouch. When you let go of the left ctrl, the reverse happens, and the server knows that it is false, that you are not crouching, which will then prop you back up to standing.

This process all happens near real-time, so you don’t associate the pressing of left control with a long-winded process, but it goes on nonetheless. Since it’s something that takes place in the console, it becomes something you can change.

True and false parameters also have a second setting that dictates whether they are temporarily or permanently true or false. Without any extra text, a changed true/false parameter will be permanent.

Using input.bind c duck your character will duck when you press the C key and won’t stand back up. Your command prompted your avatar to permanently make the crouched state true, which is handy if you want an ability to be toggleable.

However, if you want a command to only be active while holding the C key down, add a + sign in front of the command you wish to change.

Using input.bind c+duck the console knows that the true state for duck is only while holding down the C key.

Most of the settings you can control in the console exist on a sliding scale. Typically the scale is limited to between 0.0 and 1.0; however, others maintain their full range of settings. Note that since these settings are no longer true or false booleans, they don’t preserve the + (on keypress) functionality.

These are typically setting changes, such as different levels of volumes or graphical settings. An example of changing the volume may be:

Using this command input.bind p audio.instruments 0.5 binds the key ‘p’ to change the volume of in-game instruments to 0.5. It won’t affect the master volume levels or in-game music. Remember that this is not toggleable, so if you want the sound to come back up to full, you’ll need another keybind, such as:

With this command input.bind o audio.instruments 1.0 the two keys side by side makes it convenient to remember where they are and change the states back and forth at a whim.

As stated, other parameters exist in the range that the options menu outline. Field of View or FOV is an excellent example of this. FOV’s have a relatively accepted universal coverage across most games.

If you’re the kind of player that likes to change their FOV depending on the situation, you might set up keybinds to change it. In which case, you’ll need to know the precise numbers you want to adjust your FOV.

The input.bind numpadplus fov 90 command will let you set the Field of View to 90 degrees. To see the range of these kinds of settings, you’ll want to check in the options menu. In the settings menus, the UI will outline these options with recommended maximums. However, you can use the console much of the time to go beyond the maximum setting at your own risk.

As your keybinding process advances, you’ll want keybinds that affect more than one parameter at a time. Fortunately, this is easy to do. Write out the command line for a single action, and at the end of the line, add ; without any space type out the next command.

Using the input.bind e forward;sprint command binds the E key to hold down forward and sprint. In essence, the semicolon acts like an ampersand for the console.

Some of RUST’s most useful keybinds pertain to creating items on the fly without opening the crafting menu. In combat or a situation where you want to keep moving, i.e., anytime you’re outdoors, having a shortcut for the item is massively helpful.

These keybinds, however, are the most time-consuming to make as you’ll have to do a bit of research to find the item you want to craft in-game ID. We keep an updated list of RUST Item IDs to use for such tasks.

To make a crafting keybind, there is an extra step to remember. Start with the standard input.bind followed by your key of choice. Add the command line craft.add and then the item id. Finally, follow up on how many of the item you want to craft.

Note that some item ids begin with a - symbol, which you must include on the command line. For example, the bandages are ‘-2072273936.’ So the following line will craft one bandage at a time. And will queue more bandages each time you press the key.

If you set the volume to five and only have enough cloth to make four bandages, the button will not make what’s available. To that end, it’s handy to leave the crafting at ‘1’ and repeatedly press the button to queue multiple crafts.

Choosing a key for key bindings in RUST

You have every key on your keyboard and mouse at your disposal when setting up a keybinding. Just remember that any key you bind will become unbound from whatever it was previously.

Another important note is that keys such as letters and numbers are as simple as putting that number in after input.bind. However, other keys might have a specific name. You may want to bind something to the + key next to the Numpad.

That key’s name is keypadplus, which distinguishes it from the + key attached to shift =. The same as the numbers on the keypad. If you want to use the number 5 on the keypad, you’ll have to type:

Which key you choose may depend largely on how urgently you need to press that particular key. For example, you may want to put a quick heal keybind on a key close to your hand’s natural position on the keyboard. Numbers 1-5, tilde`, Q, or E are useful, as you don’t have to let go of the movement keys to press any of them.

If it is less important to hit those keybindings quickly, further away on the keyboard will suffice. These keys can include most punctuation, as these see no use in regular play.

A keyboard key will not count as pressed if you type it while in the chat window, so don’t be afraid to repurpose just about anything for a keybinding.

Keybinds in RUST aren’t as difficult as they appear.

Given the RUST console tools’ functionality, a savvy player can set up a keybinding to do just about anything they want. If there’s a command-line available and space on your keyboard, you can shortcut anything that might take a few clicks to do in-game otherwise.

Give making your own keybinds a shot. If something goes wrong, you can set all keys back to the RUST Menus’ default settings using input.clearbinds, do so carefully.

However, if you’re not feeling creative and you would just like a list of handy keybinds, check out our useful RUST keybinds guide.