“The server is currently listed under Community. Please be aware that Facepunch only allows admin tools (that do not affect gameplay) under the Community section.”

This statement is made on every Community server, everywhere, every time said server goes through the startup process. Simple enough for the average player… I guess this means that any server that makes any sort of change to impact any portion of gameplay is considered Modded, correct?

To understand the differences, you first have to examine the more updated and detailed Facepunch Community Guidelines. Coming straight from RUST Producer Alistair himself, Community servers must not:

To further complicate matters, there are game settings (convars) that server owners and admins can change from the default setting without violating this mandate, so long as they don’t use a plugin to do it.’

Things such as resource spawn rates, resource density, rate of decay, and upkeep, all the way down to the frequency of weather and animal spawn rates, are fair game. Check out our complete list of RUST Admin Commands for additional alterable settings.

Altering any of these convars is perfectly acceptable within the scope of the Community Server category, according to the game developer.

One more solid wrench in the pudding; admin-exclusive plugins do NOT require that a Community server be changed to Modded. This slippery slope will be gone into later in the guide but will be prefaced with the following controversial statement; if the server description or format states that admins actively play the server in question, admin-exclusive plugins technically would (in this instance) require the server be set to Modded. Remember basic RUST server etiquette.

So what does this all mean? To sort out the specifics of a commonly misinterpreted topic, we will do a deep dive into the subject.

By their very nature, Community servers are intended to be an outward extension of the official server format, vanilla at their core and hopefully unspoiled through ownership meddling.

Minor alterations through settings, cute names, and individual Discord servers are fine, but leave the gameplay and interface alone!

On the other hand, Modded servers are a proverbial Devil’s Playground of potential. Short of violating the game’s terms of service, server owners may load any plugins they wish and turn their server format into anything they want.

Nothing is off-limits, from build and creative servers, bedwars, raid simulators, aim trainers, battlefield, PVE, or roleplay paradise servers. The gameplay and the GUI are everything but what the developers intended initially.

Thou shalt not alter gameplay.

What constitutes a gameplay change? Gameplay, by definition, implies the way that the game is played or intended to be played by the developer. RUST, on the surface, is a survival game; the point is not to die as much as possible.

Go forth from the beach, gather resources, and do what is necessary to survive and prosper. Convars completely aside, being whitelisted as anything goes, this leaves us with the plugin category as the sole determinant of either Community or Modded status.

How, then, do you determine a plugin’s effect on gameplay? While some cases are cut and dry, some situations and circumstances nudge a plugin’s status in one direction or the other.

The following are questions that can be used to adequately determine a plugin’s Community-friendly status from the gameplay perspective:

While not limited to these things, if you answered yes, then chances are your server might be moved to Modded or reported as incorrectly listing as Community. Repeated infractions can have repercussions for the server in question and ultimately lead to a permanent blacklisting.

Thou shalt not alter the GUI.

The graphic user interface in RUST is like many other games of its type but certainly has its style. In the eyes of the game developer, that style should remain as they created it for a server to remain in the Community server listing.

By definition, this means that there should be no additional fancy overlays, no shapes, colors, graphics, boxes, dongles, clan signs, advertisements, or anything of the sort present anywhere from the second a player clicks “Connect” on a server, to the second the window is closed.

The interface should be precisely how Facepunch intended it to be, with no exceptions, unless advertised by the developer’s posted guidelines.

Similar to gameplay, these questions will shine a relatively bright light on plugin Community eligibility quite quickly:

Just like gameplay changes, and while not limited to these things, if you answered yes, then chances are your server might be moved to the Modded list or reported as incorrectly listing as a Community server.

If you thought this was the end, there is another plugin factor that changes the landscape entirely; Admin Plugins.

Okay, so what are the differentiating factors of an admin plugin?

Is there a definitive listing of community-approved plugins?

The problem with a ‘definitive listing’ is the nature of the Community-driven process. Plugins are not under the directive jurisdiction of Facepunch or its teams, meaning that in the eventuality that they were to produce a ‘current whitelist,’ nothing is stopping the Community or those plugins’ developers from altering that mod into something completely different.

Hypothetically, what might be billed as the new version of Vanish (perfectly acceptable admin plugin), previously deemed an ‘approved plugin for Community admins,’ could be altered without the game developer’s knowledge into something that allows all players to become invisible by default. In the current format, with the arrangement between Community developers and game developers, there isn’t a logical basis for creating such a list.

My server is Modded; can it revert?

Absolutely. So long as a server conforms to the above requirements, having no gameplay alterations via mod, nor GUI changes, reverting from Modded to Community is a snap.

Simply access your Oxide server folder, opening the file:  oxide.config.json. Within this file, under “Options,” typically around line 3, there will be a "Modded": true function.

Change the value "true" to "false" and save this file, then restart your server completely. Your server should now display in the Community server listing instead of Modded.

Note: Some third-party server hosts will flag servers that they feel should be Modded based on your loaded uMod plugin list. It might be important to communicate your intent to them to switch back to Community to prevent future misunderstandings.

Can I report servers violating this rule?

While the regulatory procedure is kept quite close to the chest at Facepunch, they do have methods in place for Community members to report servers violating their mandates.

The most effective way will come from submitting a ticket on their Official Support Site. Be sure to include as much information as possible, including the server’s IP address, screenshots, and server name.

The greatest resource we have is the Community as a whole; thousands of servers, server owners, and other assorted resources you can reach out to for guidance on this and other confusing settings.

So too, we at Corrosion Hour are more than happy to lend a hand or ear when needed, and welcome anyone with a question surrounding this or other topics to reach out via our Discord.

Other veteran Community members often jump in to help before we have a chance to see questions. It never hurts to ask, right? 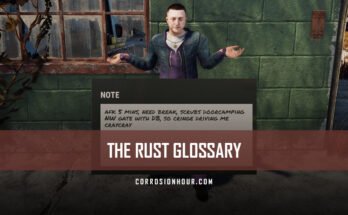