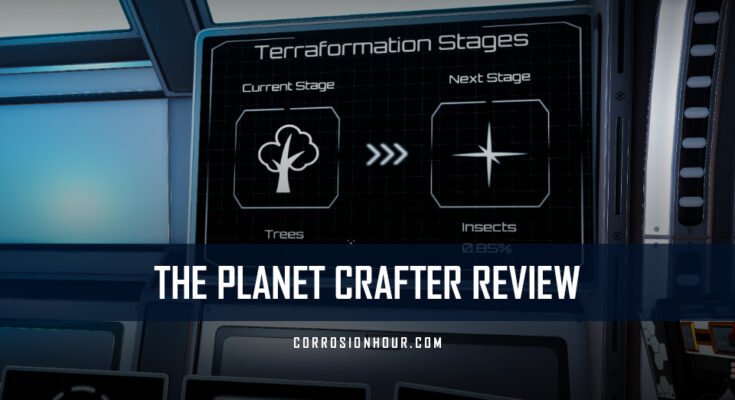 And you are wholly and utterly alone on this cold, dusty rock. There’s no one around to help. There’s barely anything around sustaining you. Alone, you must transform this unnamed planet into a world fit for life. To some, this may be a welcome and refreshing challenge. To others, an impossible punishment.

The Planet Crafter is an open-world survival crafting game based on a remote, unknown planet in deep space. There are no threats from creatures or violence with which to contend, just your own needs for air, water, and food.

The game is currently a single-player experience, but this was done intentionally to focus on creating an excellent experience for the player by polishing game mechanics and progression. Developed by the two-developer team at Miju Games, The Planet Crafter is an absolute testament to the idea that if you build a game you’d love to play, others will love it, too. 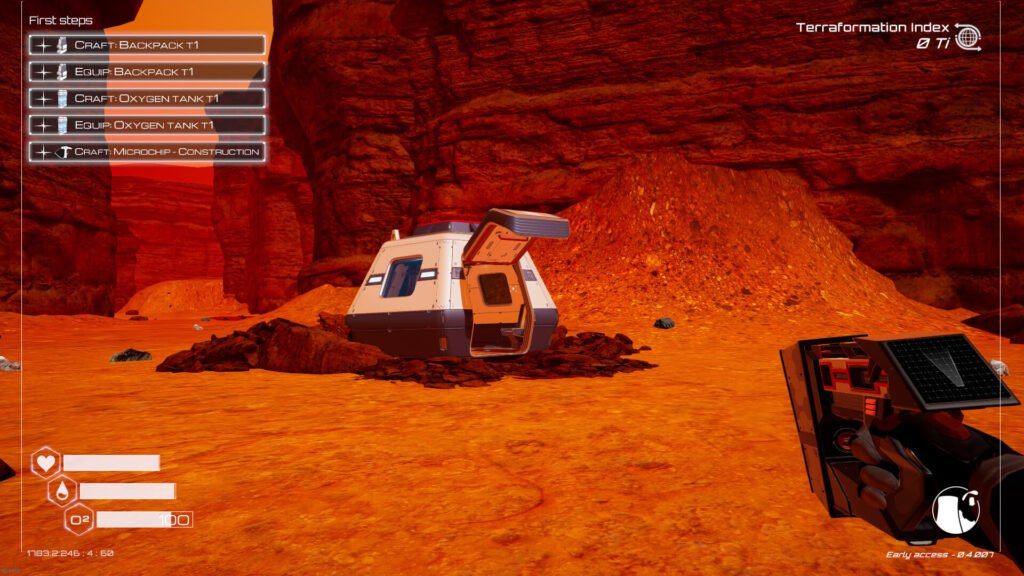 You drop to the planet’s surface as the game begins.

The mysterious Sentinel Corp has assigned you to a planet to advance the terraformation process and make it habitable to humans. Not much else is known to you when you step outside your drop pod at this point. Your only instructions are to create a blue atmosphere.

Fragments of the story leave you wanting more

In time, more of the story is revealed to you. You learn that you are a convict serving what could very well be a life sentence on this planet, charged with its terraformation effort. You are not allowed to leave the planet and not allowed to reach out for help. To be released of all charges against you (what on earth did you do to deserve this??), you must successfully terraform the planet.

As you travel the world, you’ll see a lot of wreckage from spaceships of varying sizes, broken satellites, and even what looks like a giant Stargate. What happened to all of these ships? And why was so much infrastructure left to waste away on this red desert planet? One of the intriguing aspects of the story is how very few of your questions will be answered, leaving you to speculate on the mystery of where you are.

The only goal of The Planet Crafter is to terraform the planet. Unlike most survival games where you are tasked with keeping yourself alive against the established environment, it’s your job to establish the environment this time.

You’ve come to this planet at its birth, and every stage it goes through will be a unique experience. We found this concept to be what got us hooked and why it becomes so difficult to stop playing because you will always want to see what comes next. The first time it rains will be like watching your baby take her first steps. So proud!

Color plays a pivotal role in The Planet Crafter. The sky is oppressively red when you first begin and reminds you of how alien this planet is. Something as simple as the sky turning blue feels like an accomplishment on par with getting a high score in your favorite arcade game.

Different regions of the world take on their own characteristics, too. The putrid sulfur canyon is filled with an unpleasant, bright yellow cloud that has an entirely different tone from the dark, chilly osmium cave. And in a dazzling display of terror and wonder, a variety of meteor storms will change the sky’s color as balls of flaming stone and minerals pelt the planet’s surface. 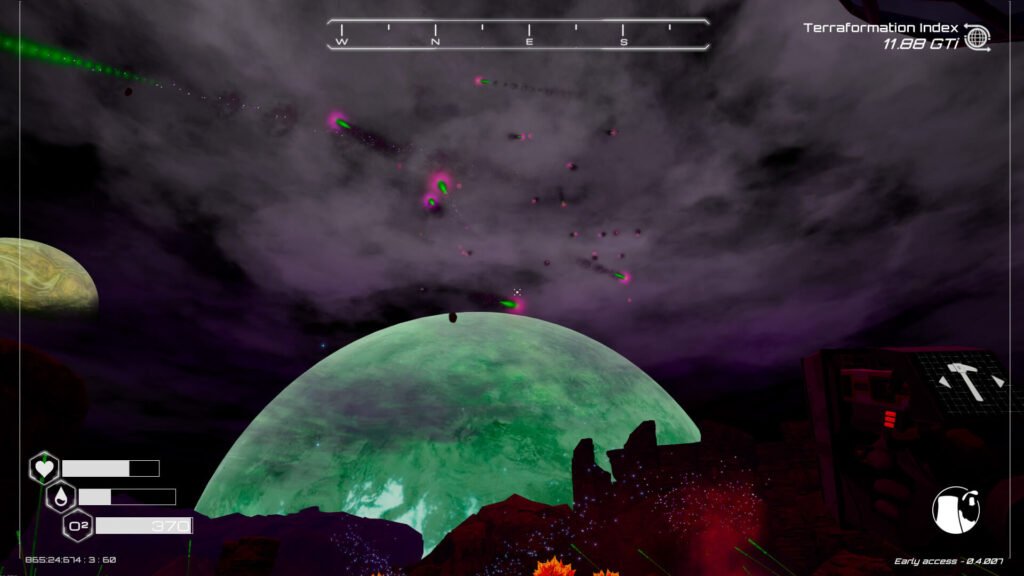 The musical score and sound in The Planet Crafter accurately set the tone for the game. With melancholy and, at some times, urgent music, you feel the need to act quickly and with purpose. I would recommend you keep the music turned up to get the full effect of the score while you climb hill after hill of crunchy sand.

The howling wind is a constant reminder that this lifeless world needs an insurmountable amount of work to make it livable. It is at times even alarming not to hear any other familiar sounds, like rustling leaves or a bird chip. All you hear is silence. Unnatural silence.

One of the more exciting events in my experience with the game was the atmospheric sound triggers that let me know that a meteor shower was about to happen. Couple this with the sky changing color, and the stage is set for a spectacular event.

Your first hour or so on the planet will be difficult. Your oxygen tank is painfully tiny, and you will run out of air quickly. Your first order of business is to get yourself set up with the essentials for surviving and crafting the equipment you’ll need to begin terraforming.

Fans of exploration for the sake of curiosity will love The Planet Crafter. The moment you’ve got enough oxygen reserve to do so, you’ll explore nearby dunes and caves, looking for anything and everything that can help you survive longer. The planet’s surface is littered with space wreckage and destroyed ships that are irresistible to the curious terraformer.

Out of all of the stats that you’ll keep your eyes on, the most satisfying will be the Terraformation Index. This number is directly related to your efforts on the planet. The more you build, the faster this number ticks, and the more you’ll feel that happy feedback.

In addition to the Terraformation Index, you’ll see subtle changes to the environment as terraforming progresses. The first moment you see the sky turn purple will change everything for you. This detail will push you to work faster to see more progress. You’ll never forget that feeling of accomplishment when you see pooling water for the first time.

You are granted additional blueprints from Sentinel Corp as you pump the terraformation index. Blueprints may be new or higher tiers of current machines that work more efficiently. Blueprints could also include improvements to your gear, like a larger inventory or a faster jetpack. Each blueprint unlock boosts your ability to terraform, which in turn encourages you to keep progressing.

No terraformation project would be complete without proper accommodations for the hardworking terraformer. Planet Crafter has an advanced base crafting system to allow you great creativity to generate elaborate bases of operation and living quarters. 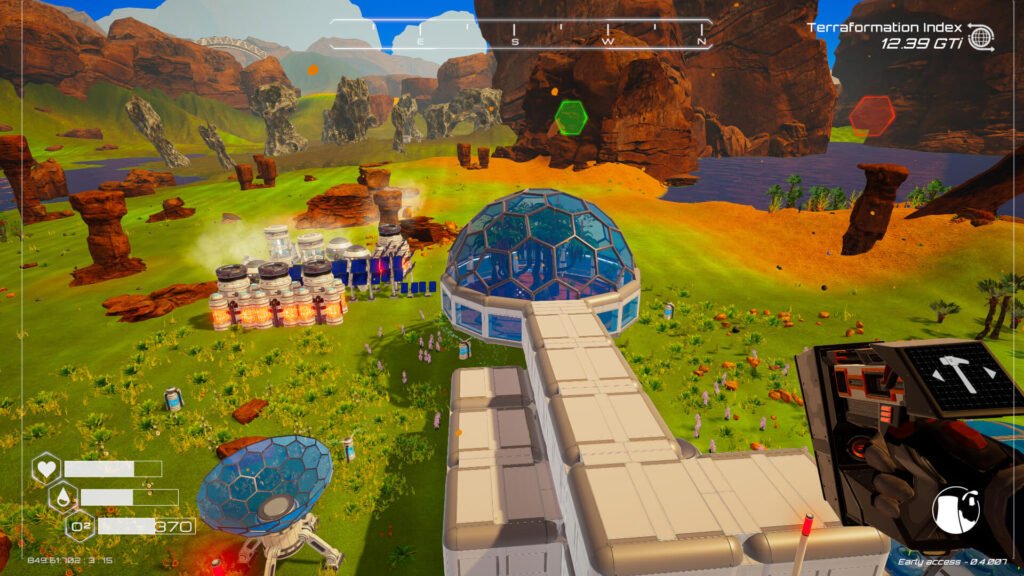 The Planet Crafter is still in very early access, so the overall scope of replayability is a bit unknown. That said, the doors are wide open to endless hours of custom base building and custom terraforming. Want to fill every square inch with trees? Excellent. Build a home over a lake? We’d love to see it.

The game currently supports different play difficulties to test your skills. There’s a relaxing mode that reduces the survival aspect of the game and gives you more freedom to work on creative pursuits. In contrast, the hardcore mode will completely delete your save file if you die and dramatically accelerates the rate at which your oxygen/food/water depletes. Test your creativity AND your survival prowess.

According to the roadmap, Miju Games hopes to add small wildlife, vehicles, and new planets later on if the game is well received, and the player base desires further development of these features. They also plan to release more content updates throughout early access to bring more surprises.

Final thoughts on The Planet Crafter

The Planet Crafter is an instant favorite for us. The combination of resource gathering and management, exploration, and satisfying upgrades ticks all the boxes. Tie in an immersive soundtrack and a unique objective, and you’ve got a quality game that will provide hours of creative building or feverish race to get to the next stage of terraformation.

Follow Miju Games and The Planet Crafter to stay up to date with development.

Will Planet Crafter be multiplayer?

The early access release does not have a co-op mode, but there is the potential for it to be implemented later on according to the roadmap.

Do resources respawn in Planet Crafter?

Resources do not respawn, although it may appear they do. Meteor showers may introduce more resources when they crash into the planet’s surface, and you will find them scattered about the impact site.

Are there achievements for Planet Crafter?

There are currently 19 achievements for Planet Crafter. 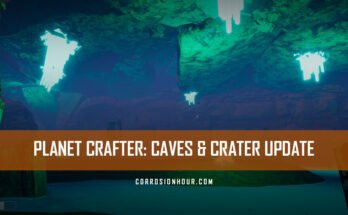 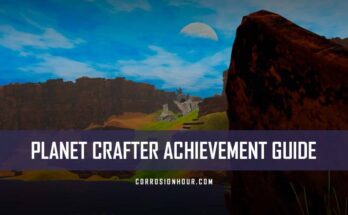