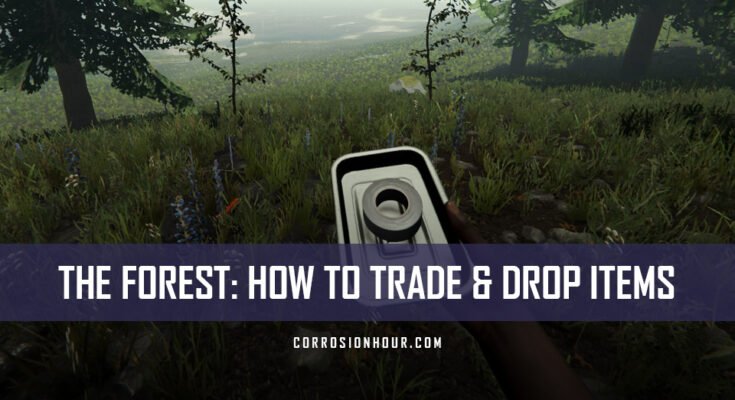 Learn how to trade and drop items in The Forest

In The Forest, there’s never a drought of work, with the densely wooded forests, the rolling hills, and open coasts crawling with flesh-eating cannibals and terrorizing mutants. Even if you choose the pacifist route and enjoy scavenging and exploring in Peaceful Mode, you and your teammates will always have something to do.

While you may be crafting or preparing for the next battle with cannibal and mutant patrols, you may be wondering how you can give items to other players in your party to ensure everyone has a longer chance at survival on the peninsula. This guide will show you the various ways to trade and drop items with other players and provide tips for how storing items and gear work in multiplayer.

What is the metal tin tray?

The metal tin tray, released in v0.30, is a multiplayer-exclusive item that harbors up to 6 inventory spaces—so, as abrasive a summary as this is, about an intact corpse’s worth. When utilizing this amount of inventory with the tray, those items can be shared back and forth between separate parties in Multiplayer Mode, which can be especially useful for whatever cannot be dropped on the ground after looting; snacks, meds, and crafting materials all fall into that category.

Where to find the metal tin tray 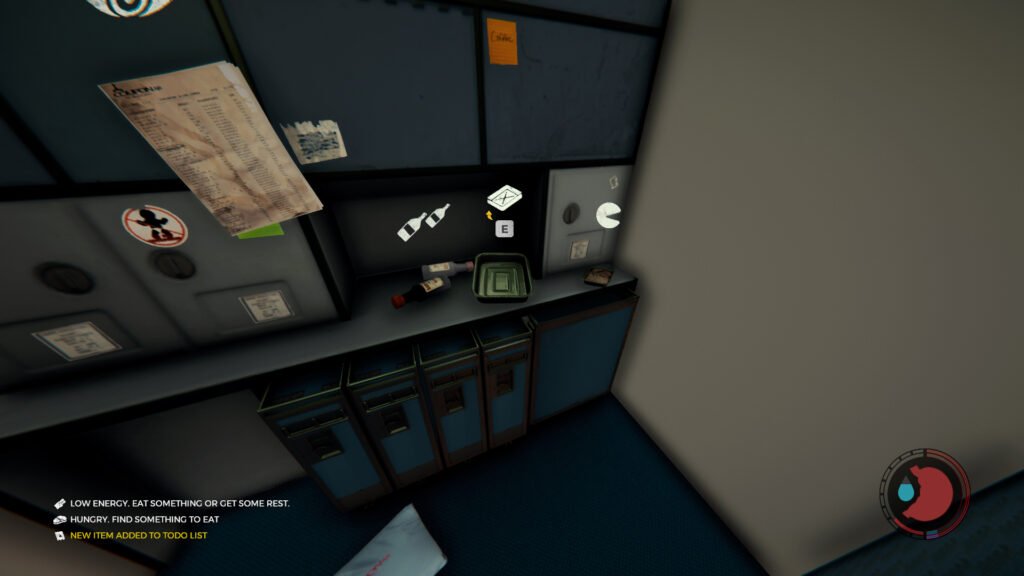 Sometimes, even in a multiplayer game, the metal tray may not be there for you to collect. A quick fix is to reload into the game or launch another multiplayer game to collect the tray and then come back to your original server to see if it has spawned for you. If the tray remains uncollectable, you can attempt to recollect it after you die.

It has been known for the tray to glitch out and fall beneath the map; however, as the game has been massively fixed since its launch, it is unlikely that you should have any issues gathering the tray.

If you have left the plane and forgot to gather anything from it, you can make your way back onto the plane, or you can spam the jump key near one of the lower sides of the plane, allowing you to climb on top of it and drop down back into the plane. With the metal tin tray, collecting items has never been easier!

Note that some items on the peninsula may not be eligible for trade.

Other ways to drop and trade items with other players

There are several other ways for you to be able to give items to other players. Most items cannot be dropped but can be placed on structures to give to other players, and in some cases, you can even partially build structures for another player to destroy to collect the items.

The following is our guide on trading or giving items to other players. 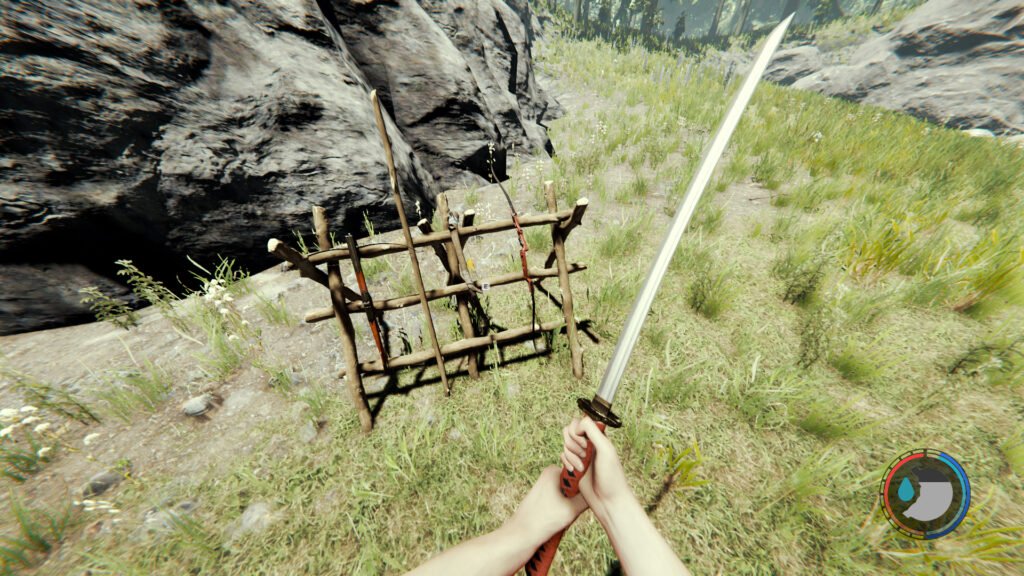 You can even give weapons you craft and find to other players; however, this will remove the weapon from your inventory but is a good way for you to get a new player up to speed by giving them gear. Items generally respawn after the game is reloaded, so there is a way to recover these weapons should you lend them to another player.

Using a Weapon Storage Rack or Wall Weapon Rack is the best way to trade weapons with other players. You cannot place the plane axe, repair tool, or the turtle shell onto these racks while other ranged and melee weapons can be placed on them to be collected by other players. It is important to note that your weapon upgrades are player bound and will not be transferred to other players, so when you recover the weapon or gather another one, your upgrades should still be equipped to the weapon. 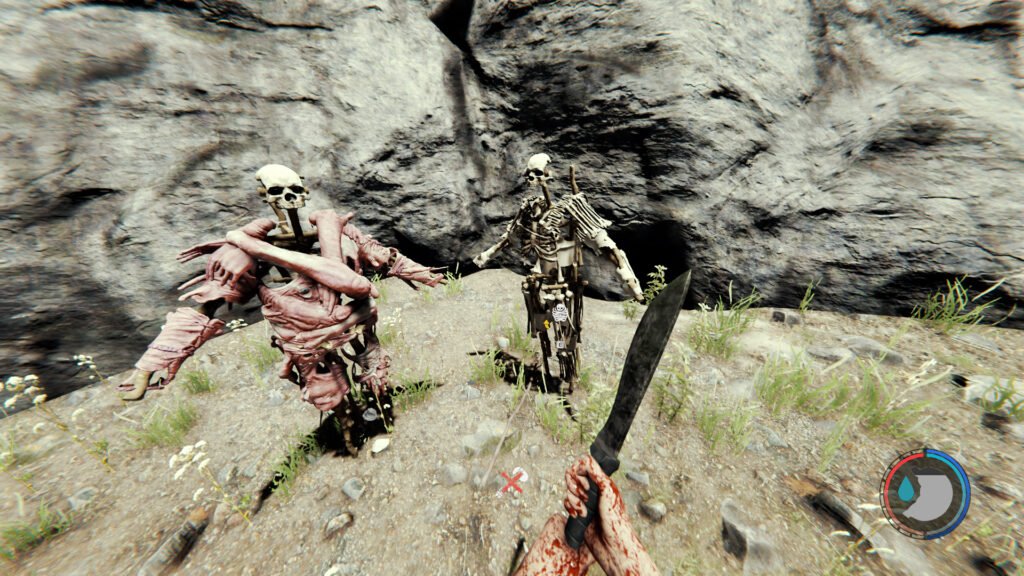 Similar to the weapon storage racks, you can craft an Armor Rack to place various parts of armor to store up to 10 pieces of armor. This is useful for having around to stock up on armor since you can only carry 10 pieces of armor in your backpack. You can also use a Skin Rack to store some armor, mainly lizard skin. Do note that only bone armor will be used to cover the head part of the armor since it is the only armor that appears as a mask or headpiece.

Explosives and molotovs can be stored on an Explosives Holder for you to stock up on several amounts of explosives that you can have at the ready should a mutant patrol attack unexpectedly. You can even store rocks on it as well, but we recommend using a Rock Holder to leave more space for explosives.

Arrows can be stored using an Arrow Basket so that other players can restock their supplies should they need them. You can also trade arrows via the metal tin tray, but this allows you to have a collective armory for your party instead of constantly meeting up to trade gear. If you want to create a good source of feathers, you can also craft a birdhouse and have it crafted next to a Stick Rack to make arrow crafting much easier and to have a passive way to gather materials to keep your arrow supply high. 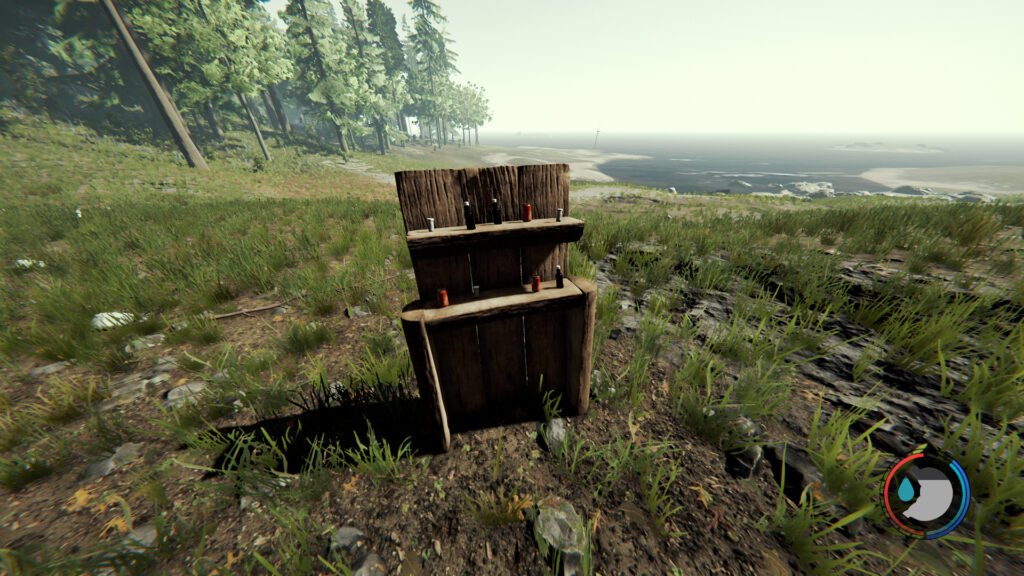 Having a consistent supply of food and medicine is critical to your survival, and keeping your friends alive longer is made easy by utilizing Large or Small Cabinets. We recommend crafting the Large cabinet as it holds more items (a total of 12) and is space-efficient compared to crafting several small cabinets. In these cabinets, you can store booze, herbal medicines, meds, snacks, and sodas.

Suppose you want to make sure your party has enough drinkable water. In that case, we recommend crafting a Water Collector to collect rainwater to fill everyone’s drinking flask and eliminate the need to constantly find water. Crafting multiple water collectors is a very efficient way to store large amounts of water.

You can give other players meat by either trading with the metal tin tray or by placing the meat down on a fire to be eaten by another player. You can also trade more foods by utilizing the Old Pot and making some stews for you and your friends to top off your hunger meter before your next adventure. Animal traps allow anyone to gather the trapped animal, and however, if they aren’t checked in time, the animal can escape.

Bugs and glitches to be aware of

The metal tin tray can actually duplicate certain items making it much easier for you to acquire certain items. To duplicate things using the tray, you must use the following eligible items:

For the duplication glitch to work, you must have over 30 of these items, and it works best if you are not the host of a multiplayer game. For arrows, you can achieve this glitch by using more than 6 on the tray, but sometimes you may need more; however, regardless of what arrow type you use, you will only get regular unupgraded arrows in return.

To begin the duplication, take the item you wish to duplicate and add all of them to the tray (or 6 arrows), but don’t fully combine them yet. Once you have as much as you can add to the tray, you can now press the G key, and it should add an additional amount of those items back into your inventory.

Suppose you are having issues combining the items and getting the duplication to work. In that case, you can hold down the item you are attempting to duplicate to where it will begin combining mass amounts of that item and cancel it without releasing the ‘add’ button.

This usually has a higher rate of success, but it varies in terms of reliability. Generally, the more items you add to the tray, the easier it will be to pull this glitch off.

Another glitch that can occur is very rarely, and you may lose the tray upon death. Should this happen, you can reset your server by leaving as soon as possible, and if you still don’t have the tray, head back to the plane wreck to recover the tray.

Another duplication glitch that has a bit less success than the metal tin tray trick is that if two players have an entire inventory of a particular item on the ground, both players can spam the E key to collect it. This may cause the item to duplicate on the ground. This can be used for rocks, logs, sticks, food, etc. Logs can be a bit more tricky to duplicate this way, but success varies from server to server.

When survival depends on trading and dropping items for others

When playing The Forest with your friends, you will come to learn quickly that building and collecting armor sets is a priority. Each encounter you run into will likely end in some armor loss, so being able to trade and store armor for yourself and your teammates becomes critical for progressing through The Forest. With this knowledge, you will be better prepared for your survival across the Peninsula. Be sure to check out The Forest Beginner’s Guide for more tips and tricks to help you along your way. 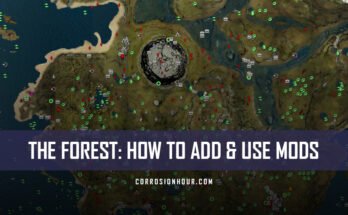 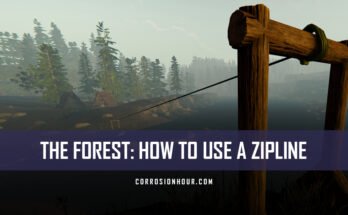 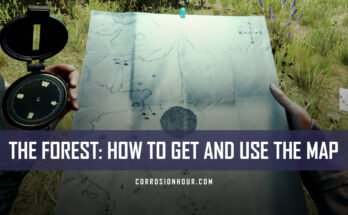