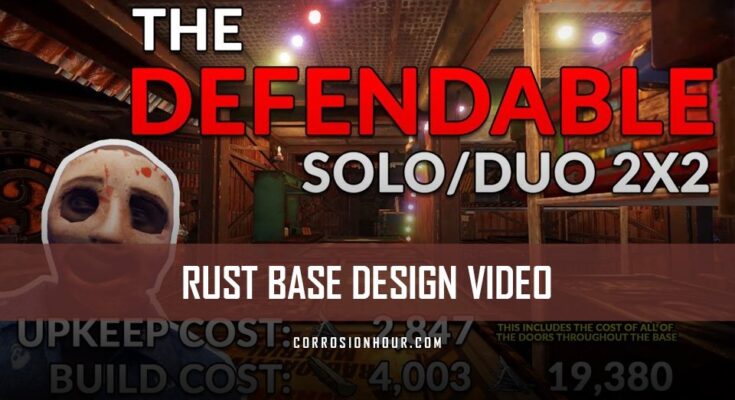 Hey everyone, we’re excited to bring to you Malonik’s latest base design video! We’ll let the video do the talking, but you can expect to see more videos of this type in the future. Be sure to give him a like, leave some feedback and subscribe if you dig his content! Enjoy the video, and be sure to come back and let us known how the base worked out!

Transcript of the Video

So you guys seemed to really enjoy the 3×3 from hell and i have had a number of requests for a solo / duo base.

Usually we just go with a standard 2×2 if we aren’t building the 3×3 from hell. However when doing so we have had our fair share of door campers and frustration.

So i got the gang together and we started brainstorming a solo duo base that wouldn’t get too pricey but would offer decent security and the ability to defend it.

This is what we came up with.

As you can see from the outside this base offers the security of a fully honeycombed 2×2 while also giving you good visibility around your base for defense.

Additionally, utilizing the honeycombing like this allowed us to make it a bare minimum of 6 doors or a maximum of 7 doors to the cupboard and main loot depending on which entrance they come through. They might come in via the roof however the roofing should discourage them as the cost would be too high.

Speaking of entrances, this base has two entrances, one either side. Between the shooting alcoves and the two entrances you should be relatively safe from door campers and only bigger groups will be able to lock you down in your base.

Now let’s take a look inside. Once we get through all the doors we hit the core 2×2. Galthad and i spent a while trying to fit as much as humanly possible in here while still maintaining the functionality of the base.

Inside here you have 15 large storage boxes, a workbench, a research table, a repair bench and a barbeque which i think was a damn good effort for such a small base.

Obviously when you start out you will be limited with what you can accomplish as you will be stuck using double doors rather than garage doors. Ultimately it is up to you whether you go with leaving some doors out to accomplish the layout we have here or to have the extra defense and adjust the layout accordingly until you get garage doors.

Personally, i would recommend going for adjusting the layout until you have garage doors as the extra defense is more important than extra storage and convenience.

Going out from any of your internal doors will take you to your shooting alcoves. We played around with a few options here but ultimately this seemed like the best option for visibility.

Now let’s take a look at building this thing.

As always start by getting your foundations down to make sure you have room for the base first. Once you know you have the room for it get this room built and upgraded. Drop your cupboard down right in the corner like this and lock it up.

From there we want to expand into the full 2×2 by adding double doors here, here, here and here, wall in the rest and ceiling up the roof like this.

Doing it this way creates a shooting area that people can’t jump into and you don’t need any bps. That being said it is also a higher cost as the half walls cost the same as full walls. Though even with the higher cost this is still a cheap base to build and maintain.

If you have the metal embrasures you can use windows and those instead however it will affect your visibility on people that are crouched next to the base.

If you go with the half and low walls method make sure you upgrade these to metal as soon as possible as they can be soft side speared or picked from the outside.

Then we add the roofing to the main 2×2 from the inside like this and upgrade it from the outside.

Now it’s time to fill the base with your boxes, workbench, furnaces and all of that. If you do go with our layout it’s important to remember that anything outside of the core 2×2 such as your research table and furnaces are more vulnerable than the storage inside.

With that in mind make sure important items such as scrap are kept in the central part of the base and move your resources from your furnaces regularly.

It is also worth mentioning that whenever you’re going to open your shooting alcoves you should ensure doors are closed behind you so that nobody gets a sneaky look inside your base from outside. The less anyone knows about your layout the better.

After that you just need to add the internal doors here and here. We decided to use garage doors throughout a lot of the base. You can use double doors until you get the garage door bp. You can also use single doors to save on cost however i don’t recommend it as it does mean you will have to pick out those doorways later or alternatively stick with single doors which are weaker than garage doors.

This is a cheap and defendable base for a solo or duo team. If you’re getting raided by someone that is happy to burn at least 16 rockets on raiding a 2×2 they’ll have the resources to raid a base twice this size making it a waste of time and resources to go any bigger.

Additionally, given how cheap this base is you could easily build more than one, split your loot across them and use them to shoot at raiders from a different angle while they try and raid you.

Once you get the bps add shotgun traps throughout the base for defense and spikes on the roof to deter people from door camping you from above.

Before we finish up i have got to say that i am absolutely stunned at the jump in subscribers over the last few weeks. It’s crazy to think that it took 2 and a half months to go from 100 to 250 and then 2 weeks to more than double that! Thank you so much for all of the support. I’ll be getting a 500 sub giveaway up and running soon! In the meantime, let’s keep working towards 1000 subs!!

A huge thanks to corrosion hour too, they have been putting in some serious time and effort to get my channel out there and i appreciate it so much!

As always if there’s anything you would like to see let me know! I’m here to help and entertain you guys! Also make sure you have subbed and clicked the little bell so you don’t miss any of my content!