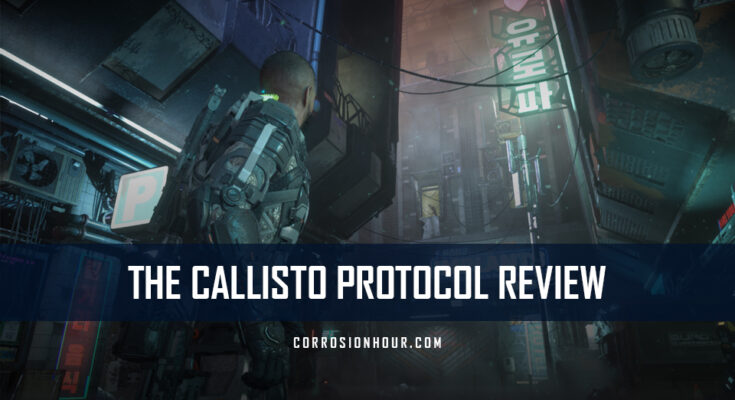 It’s like playing Dead Space through a different lens

The Callisto Protocol, developed by Striking Distance Studios, was billed as the spiritual successor to the Dead Space franchise. Glen Schofield, the creator of Dead Space, led his team of veteran developers back into the depths of space to create another survival horror franchise heavy with guilt, shame, loss, and revenge themes. What nobody expected was that Striking Distance would succeed a little too well.

The Callisto Protocol was Glen’s attempt to get the story right. Dead Space is owned by EA, who was responsible for butchering the third game in the series.

Glen had big plans for Dead Space, alluding to solar system-wide conspiracy theories and shadowy cabals interested in controlling humanity’s future. He’d laid an impressive foundation of captivating characters, story, and worldbuilding with the first two Dead Space games, only to watch it all tumble away with the third.

Callisto is Glen trying to recapture that lightning in a bottle he gave us with the original Dead Space. Another attempt at building a massive sci-fi universe with hundreds of years of history and lore. Unfortunately, Glen may have copied and pasted from Dead Space a few too many times in Callisto.

Let’s dissect the stunning, the stellar, and the familiar of The Callisto Protocol.

At its core, Callisto is Dead Space. There’s no way around that.

Both stories occur during an outbreak of an alien life form that reanimates dead things and morphs them into horrifying monsters. Both center around a lone man trying to survive but actually doing various engineering jobs across space to repair broken equipment. Both have powerful cabals pulling the strings behind the scenes. Both have female sidekicks who are spunky, tough and don’t need a man.

Callisto is presented differently than Dead Space, and gamers see the story Glen was always building up to. But it’s more than a little similar to its spiritual predecessor.

Players take control of Jacob Lee, played by the always impressive Josh Duhamel, who is trying to make it in a soulless galaxy. Jacob runs a shipping business with his buddy, Max. Both have been cleared for a private space lane between Europa and Callisto, two of Jupiter’s moons. Their latest shipment has Max on edge. He thinks Jacob is hiding something and that they may be smuggling contraband. 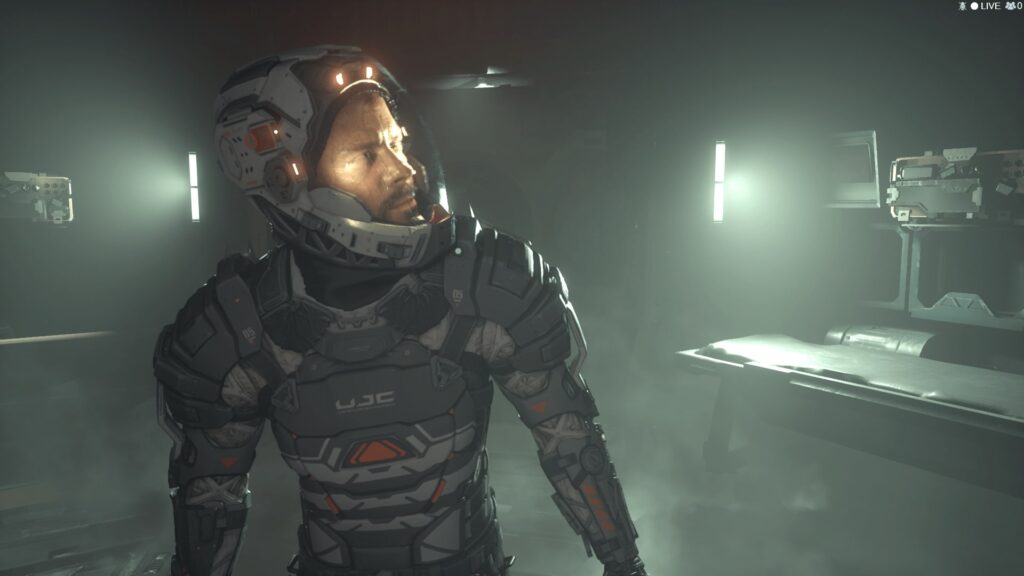 Cue hostile boarding of enemies, pillaging Jacob’s ship. After a rough crash, Jacob is taken prisoner at Black Iron Prison. Unfortunately, he was booked right before an outbreak of an alien virus that’s turned inmates hostile, insane, and inhuman. Jacob teams up with the ever-faithful Elias, and the two inmates work together to get free, not just of Black Iron Prison, but of Callisto.

One of the most disappointing aspects of Callisto was its graphics. There were essentially three different Callisto Protocols, one for each system. The Playstation 5 edition plays smooth as silk, with stunning graphics right off the bat. Crisp, clean, 60 fps with gorgeous surface scattering and ray tracing.

The Xbox version doesn’t have surface scattering or ray tracing as of a week after release, and Callisto is best run at 30 fps. 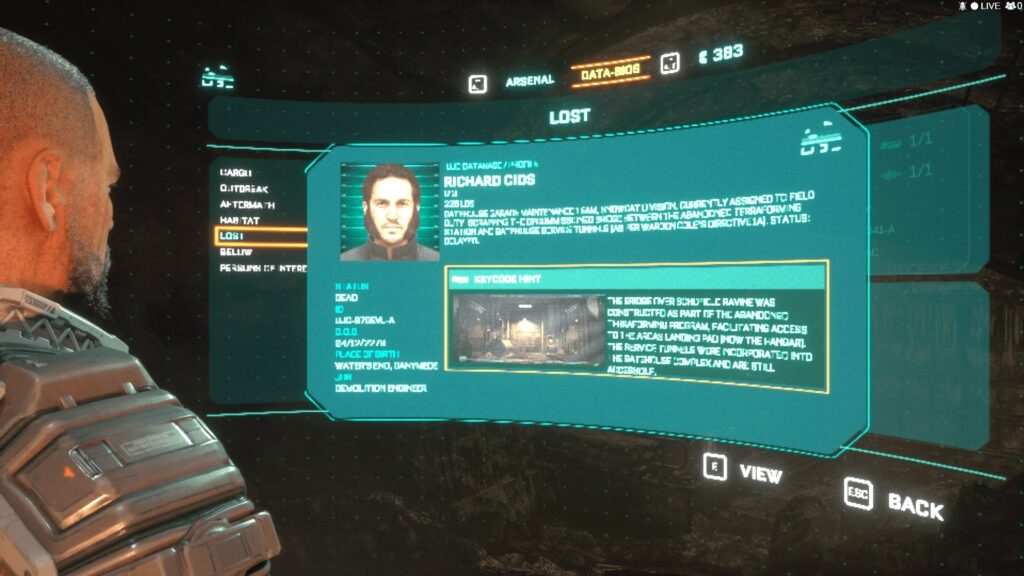 And, of course, we got Callisto Protocol for the PC, which suffered from many bugs, glitches, and stutters at release.

After two patches, the graphics are nice to appreciate. But they’re nothing to behold. If you’re playing on the PS5, your visuals are stunning. But our graphics settings are too high, and we still can’t read the text in-game.

What The Callisto Protocol does well is not unique to them. Their sound design is excellent, but it only matches that of Dead Space, Resident Evil, or even indie horror games like Madison. Nothing stands out as bone-chilling; nothing lasts in our minds well after the fact. Everything was fairly standard by today’s gaming standards.

The atmosphere they created is full of stories to tell. The environment can communicate much to players through item placement, notes, and extra dialogue. And the atmosphere of Callisto, while haunting, feels rushed. Like they tried to tell too many stories in too small of a setting. 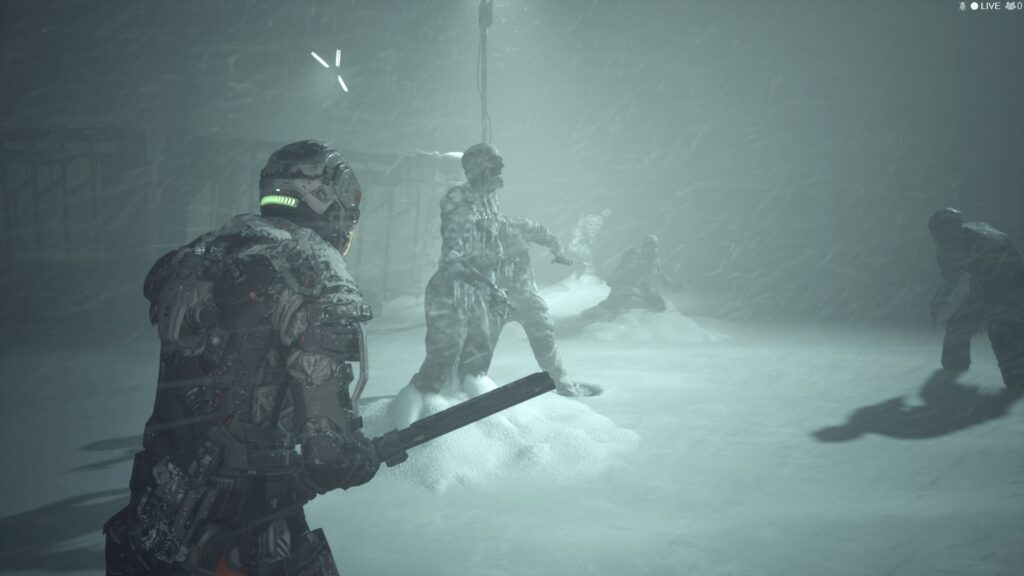 Players are ushered through different zones in the game, each with its own atmosphere and emotions. But rather than reward players for exploring dark and dangerous hallways with lore and worldbuilding audio logs, Callisto drops them right on the player’s main path.

As if they didn’t have to build an expansive universe, just a linear path, so they dropped all the atmosphere they could on it.

If that atmosphere was new, fresh, or unique, we wouldn’t mind so much. But because it’s all so familiar, it feels a bit lazy and incomplete.

Let’s talk about the controversial gameplay of The Callisto Protocol.

The gameplay is mostly combating. You’re not solving any puzzles like in Dead Space; when you fix a broken reactor, all Jacob has to do is flip a switch. So Callisto’s gameplay boils down to fast-paced combat, walking, item gathering, and button mashing. 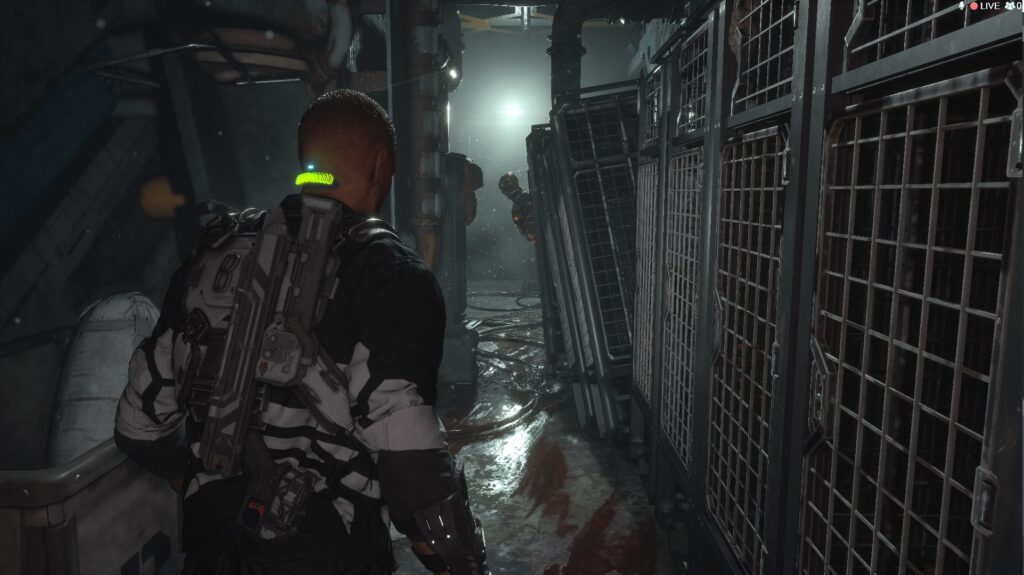 10% of the game is walking. Another 10% for item gathering, and we’ll say about 10% for button mashing. Which means combat is about 70% of the gameplay. In other words, you better get good at combat, or you’re going to have a bad time.

And unfortunately for some gamers, the combat will trip you up. It’s pretty unforgiving. As the developers of Striking Distance put it, “it’s easy to pick up, difficult to master.”

The only genuinely unique mechanic in Callisto is its dodge feature. Players are now more active in combat instead of simply shooting and running. Now they can bob and weave, dip and dive, duck and dodge if they’re quick enough. Taking a short trip through hashtag Callisto Protocol will reward you with plenty of videos of gamers rage quitting in frustration at the dodge mechanic and the combat in general. 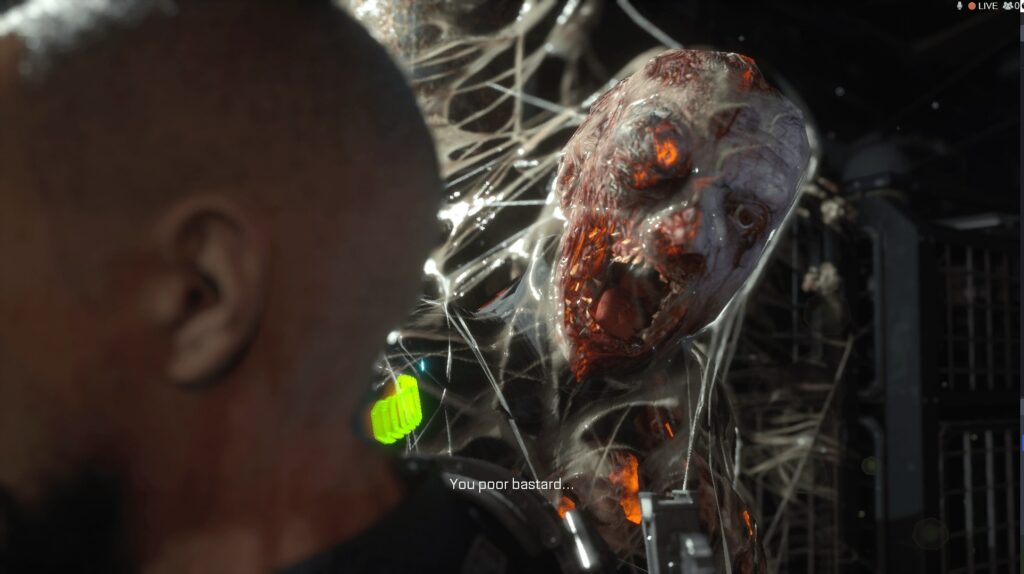 There are five guns to unlock in Callisto, a melee weapon and the GRP module, which is a combination of the stasis and kinesis modules from Dead Space. With these formidable weapons and your quick, cat-like reflexes, you will survive an outbreak that claimed the lives of thousands.

We felt the horror and surprise of Callisto falling the more comfortable we got with the dodge mechanic.

In Dead Space, if an enemy pops out of an air vent too close to you, it will deal some damage. You’re in trouble if you can’t turn, run, aim, and shoot quickly enough. In Callisto, you can let enemies charge you from all sides. You’ll always dodge their attacks if you’re moving in one direction or the other. It made all the jump scares much less scary. 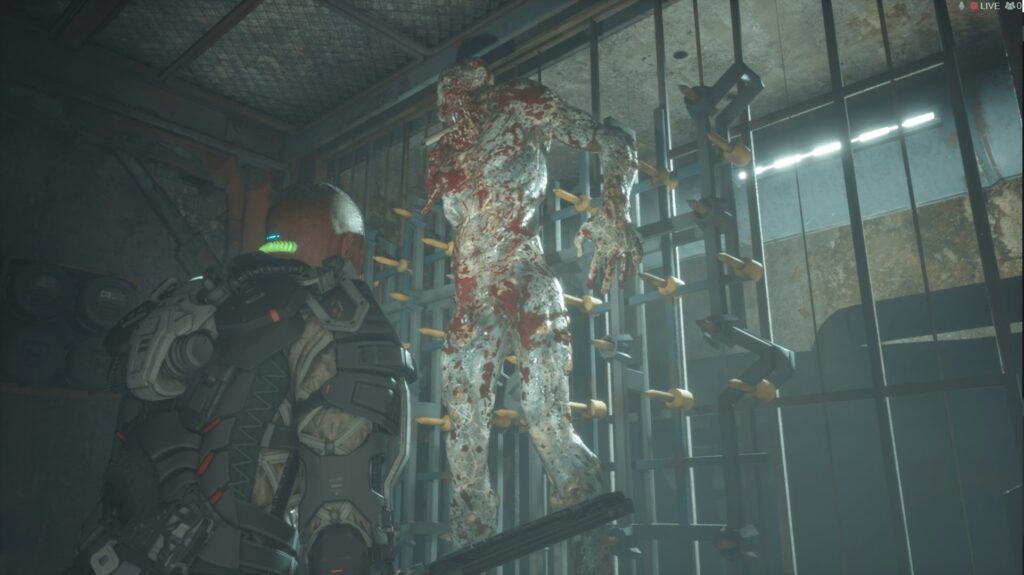 Because we’re veterans of the Dead Space trilogy and beat them each on Hardcore difficulty, the combat of Callisto was far from as challenging for us as others. We understood the most valuable tool at our disposal was our GRP module. There are so many spikes, turbines, and drills throughout Callisto; we knew the developers wanted us to use the environment to kill our enemies more than anything. Couple GRP with dodge and a few well-placed shots, and you’re breezing right through Callisto Protocol.

There is value in going through The Callisto Protocol again. Surprisingly, we missed a single audio log during our first playthrough, so we’ll probably go through it to ensure we understand everything. We focused only on two guns in our save file, so going back and using the others would open up more strategies.

But it’s an utter shame Callisto doesn’t have a New Game + option. You know, just the feature in every Dead Space game allows players to go back through the game with all their weapons and armor unlocked. Why Callisto doesn’t have one is beyond us, and it would’ve ratcheted up their replay value considerably.

Final thoughts on the Callisto Project 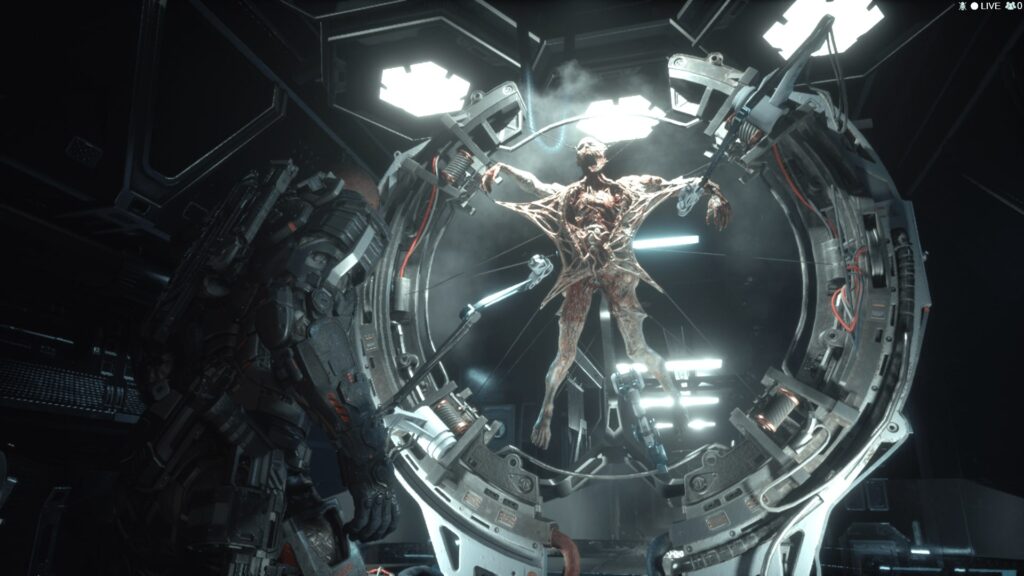 We hope this has been a fair and unbiased review of The Callisto Protocol. We played the game on PC the day it launched, and it’s a fact that its PC release was mired with problems. If we counted the number of times, we died from clipping through walls, phasing through enemies, or the screen freezing entirely, we’d be here all day. Multiple times doors wouldn’t open, and Jacob would only mantle ledges once we quit the game and loaded back in.

We are Dead Space fanboys, tried and true members of the CEC. But we didn’t want another Dead Space. We wanted something new, something updated, something unique. We got Dead Space through a different lens, and while that’s not necessarily a bad thing, it’s certainly not what we were hoping for.

The Callisto Protocol is a survival horror game for fans of the genre who can’t get enough story, action, and lore. There are plenty of brutal battles in Callisto and lots of great acting by a top-notch cast. But in the end, the Callisto Protocol was more of the same, not enough new.

A season of DLC and extra content is planned for Callisto, including an extra chapter to the story. But Striking Distance Studios has a lot of work to do if they want to earn fans’ respect and trust after this missed landing.