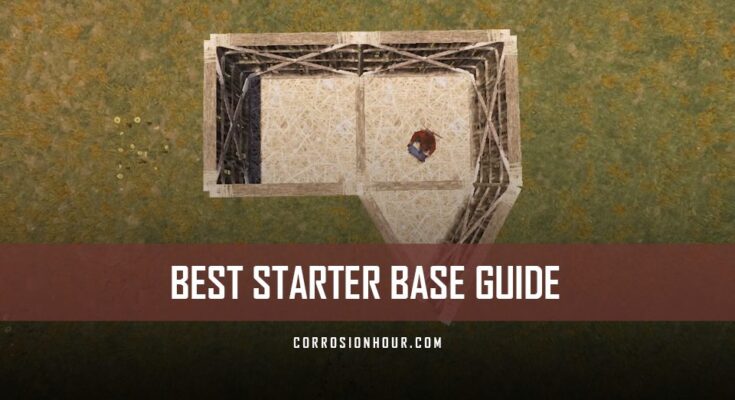 The Best Starter Base Guide

This RUST base design video, the Best Starter Base Guide, is brought to you today by our partner Cruxal.

In part one of this video, Cruxal walks through one of two RUST starter base designs that can be quickly assembled by an individual player on a vanilla RUST server. He takes care to provide players the insights of each little decision made along the way.

This starter base design is smart, small, effective and most importantly secure with a little work. Each base will provide the minimum protection needed in the first few hours of joining a new server, ensuring that your base isn’t easily raided by primitive weapons and doesn’t stand out amongst the crowd, making itself a target.

Welcome to my starter base comprehensive guide, part one.

So you’re new to the game and see thousands of base build videos, but you still don’t know where to start? That’s fine, you’re in the right place.

Over the course of the guide, we’ll go over a couple of starter bases that you can quickly build. One if you’re on your own and one if you have a few friends with you.

I’ll also go over what you need to be completely secure so you don’t get easily raided a few hours in.

Twig is the default when building. When you grab a building plan and start placing down building blocks, it will always be twig. Twig is essentially worthless. It’ll only take a few arrows to break.

It’s essentially made for you to lay down your blueprint then upgrade using wood or any of the better materials with a hammer.

It’s quite the same with doors. There are wooden, metal, and high-quality metal doors. On top of that, there’s ladder hatch and garage doors.

The first design is the most common designs in RUST, the two by one. The two by one is composed of two squares and a triangle airlock.

An airlock is an area that has nothing in it. Hence the name, airlock. And it’s used as a security measure in case someone gets inside your base.

In this case, the triangle is our airlock. Airlocks can go a little farther by placing doors in a certain way. If placed properly, doors themselves can act as an airlock.

In the first example, the exit to our base is on the left and the outside door opening inwards, blocking the access to our base even if both doors are open.

In my opinion, this is a little less safe since players can enter the triangle airlock, but not only that, with this layout they can see inside your base a little too well. Making your bags and boxes exposed to outsiders.

In the second example, the exit is to the right. The inside door blocks access to the outside entrance. This is a much better choice as sneaky players won’t have access to the triangle airlock.

Before I go ahead with the build I want to talk about something you definitely won’t want to miss. I’m a big fan of skins and you can get some free skins too, potentially any skin you want. All you have to do is download salad.io.

Salad is a small program that uses your PC to mine cryptocurrency when you’re AFK. You can then use that currency for a bunch of goodies, including RUST skins, Steam games, gift cards, and so many other rewards, when mining, which they call salad chopping.

The software tells you how much longer you must continue chopping to get the reward that you want. I’m quickly going to show myself redeeming a 15$ Skinbay gift card to get some free skins.

It’s so incredibly easy to use that you can literally get started within minutes. Salad is absolutely amazing and it’s completely free. Click the link in the description to get started now.

Now that we’ve got some essentials out of the way, let’s make the two by one. I’ll go over the build and after I’ll explain some design decisions, small changes, and upgrades you can bring to it afterward.

This is what you’ll have potentially inside your two by one.

The first thing we do is lay down our entire blueprint.

Depending on our resources available, we upgrade it to wood. If you have some stone start by upgrading the foundations first. Upgrade the rest of the base as stone as it becomes available to you.

For doors, we start with wooden doors and keylocks. Once you have your first door down we’ll place our cupboard.

After cooking some metal you should be able to replace your wooden doors and keylocks to metal doors with code locks. This will stop any primitive raiding methods like a flamethrowing, shotgun, flame arrows, and swords on your doors.

Now if you haven’t upgraded your base to stone, this should now be your priority. Wood is weak and can be taken down easily. Upgrading to stone means the base is now secure and cannot be raided with primitive weapons. Raiders will need satchel to raid you effectively.

We’ll then place another large box near the tool cupboard for additional storage. To make sure I’m lined up correctly, I’ve pushed the ball through the back wall and pulled it towards me slowly. I also used the lines on the stonewall to line myself up.

I’m going to pick up a sleeping bag to make room for a workbench and replace our bag.

Now you’ve got yourself something pretty basic, but it’s time to kick it up a notch. We’re going to make a small three-piece tweak build that’s going to allow us to place a triangle in the base.

Once the triangle is placed and upgraded we’ll go outside and break the twig.

This part may seem tricky, but as you gain experience in building it becomes much easier. We’re going to place the first box against the back wall as much as we can.

Again I use the lines on stone building blocks to help line myself up. Here I pick up my bag again as it can get in the way. You can’t place boxes half a story over bags. So sometimes bag placement may stop you from placing boxes.

We then place the second box on top. Make sure to squeeze it up against the back wall and the box to the right.

Next, we’ll pick up our two small boxes so we can fit a research table and a large box under it. It’s important to squeeze it up against the workbench.

Now we can fit the third top box. This one is the most tricky as the placement of the other boxes matters a lot.

Lastly, we’re going to place some small barbeques along with small boxes. Make sure the second small box is rotated and placed to the left, otherwise you will not be able to loot the backbox.

The base is complete. I’ll replace my bag and put it the furthest away from the entrance and place a teammate bag close to the exit. If you have a third teammate you can put the third bag in the airlock, but just remember the enemy players will try to destroy it if they get access to it.

Now there’s a few extras and tips that I want to show you that could be very well worth it. Let’s get into it.

The first one is boxes, if placing the top boxes seems too tricky for you, don’t fret. You can replace one of the top boxes with two small ones. Which makes placement easier and allows you to place bags a little closer towards the back.

Next one is the workbench upgrade. It may seem like everything is so squished that a tier two workbench wouldn’t work without moving everything around, but you can actually just switch it out without a hassle.

Another nice upgrade is the garage door. All your deployable will still fit but you will need a blueprint first. You may put a double door down in the meantime. If the area you put down in seems spicy, it’s probably a good idea to do so.

If you choose to go this route, you’ll have to place a twig doorframe and door first, then upgrade your doorframe afterward.

One of the upgrades that are definitely more debatable is upgrading to metal. If your boxes are filled to the brim but you still don’t feel comfortable building a main base, it might be tempting to upgrade to metal.

Just remember it’s much more tempting to raiding a metal base than stone. Don’t go past metal, keep your high-quality metal for your main base and crafting needs.

Another upgrade is high-quality metal doors. If you get lucky and get one early on, don’t throw it into a chest until you can research it, but instead use it. By putting it down you get much better protection and can use the hatch to close the outside door or even defend your base.

That’s all for the two by one portion for this guide. Make sure to subscribe if you want to see part two of the guide when I release it, which will be a two by two portion of the guide. I also intend to do more tutorials and guides frequently.

If you have any questions I’ve got a discord where I hang out every day and other socials that you can check out and follow me on.

Everything is in the description. I hope you enjoyed part one of the guide, I’ll see you in the next one.