The Armada, a large group base design with a punch

The Armada large group base design video was created by our partner Cosmonatic Films.

In RUST, larger does not always mean better, but in the case of The Armada large group base design, there’s a lot of good to be had here. Starting off a base design intended to house a large group or clan through a full wipe cycle is no easy feat. Being able to start with a well-planned start-to-main base design is one of the first things the Armada has going for it, leading up to a full-on multi-TC design that is packed with both internal and external defensive mechanisms, including over 30+ auto turret positions.

This is a base that requires over 150+ well-placed rockets in order to fully take over and access the massive body of loot, of which, over 200+ large boxes are situated inside this beast of a base. Not only that but there are multiple bunkers in which the loot is well distributed. Long story short, with this base design, no one is walking in freely — there’s a lot of fight to be had with The Armada.

The Armada base design features:

The Armada Base Design will cost approximately 24+ rockets to acquire the main tool cupboard with ideal route and conditions. To secure all additional TCs and loot, it will cost considerably more, totaling 150+ rockets.

Without further ado, here’s The Armada base design.

Welcome back to the channel. Today, I’m introducing one of the biggest bases on my channel to date – The Armada. A large group base meant for highly organized players who value defenses, protection, and quality of life.

Some of its main defenses include:

With that out of the way, let’s take a tour of the base.

Approaching the compound we see one of the six roof disconnectable external TCs connected to a basic gatehouse. Numerous angles and backwards facing auto turret pods force raiders to significantly expose themselves. Through one of the three entrances, we enter the inner shell peek downs.

The first floor houses the TC and overflow storage after the starting stages. Optional location for a large battery.

The third floor is the main bedrooms and inner peek-down defenses. Bedrooms are strategically split to ensure continued resistance. Three symmetrical jump chutes provide quick access to all floors of the base.

The fourth floor houses the open core which holds over 60 boxes of loot. Three triangle roof bunkers keep your most precious loot secure yet very accessible. Next to each bunker is another bedroom. The open core has excellent quality of life for large groups and is extremely dependable.

Above the loot rooms are window peeks to easily retake the open core and repel top-down raids. Even more, bedrooms occupy this gallery.

The base has numerous ankle bitter roof peeks and defenses. Breach peek towers provide additional angles towards the base to flank raiders. Wide gapped external peek downs give defenders lots of vision in and out of the compound. These window battlements have excellent coverage and protection.

Before we jump into the build you should know that this build uses a combination of advanced mechanics and should be thoroughly practiced with your group prior to building on a live server. It will require extensive planning, foresight, adaptability and should only be attempted by serious groups with informed builders.

You can familiarise yourself with it on Sanctuary by using the share code “ARMADA”.

For the timing and simplicity of the video, I’ll be assuming a certain level of competence for the advanced mechanics.

As always, I encourage you to mix up aspects of the base to keep things a mystery for would-be raiders. But with that out of the way, let’s jump into the build.

Find a very large flat area and claim the spot with a starter unit. Furnish the interior with starting deployable. Replace the workbench with a tier two. Swap the sheet metal doors with garage doors and occupy the window frame.

Next, expand to the second floor. Upgrade the TC compartment to sheet metal.

Next, we’ll establish our multi-tc sections. For advanced builders you can freehand wall stack for a gapless design.

Start by placing 8 foundations off of the square sides. Build back with triangles and place the shell footprint.

Next we’ll make our wide gap connection. Connect the half-height frames through the double door frame. Remember that you must build the connection in this order to put the frame through the other one.

Start by outfitting each gatehouse with window frames and doors. These will get vertical embrasures.

Next, enclose the compound with high walls. Starting on one of the sides, place it at the halfway point in the window frame. Place another at the gatehouse next to it. Then, seal the gap with some angled high walls. Metal barricades go above each gatehouse.

Use an electrical deployable on the wall socket above the barricade to prevent players from placing twig. Before placing the furnaces, make this foundation build-out for the future auto turret pods. With the furnaces turning out metal frags, you can fill the hex center of the first and second floor with garage doors. Then, upgrade most of those starters.

Eventually, the TC compartment will also get upgraded to HQM. As you get the resources for it, upgrade the multi-tc sections. For the simplicity of the video, from here on everything will be built in its final build grade besides the occasional HQM upgrade.

Don’t forget to upgrade the roof of the external.

When placing the wall frames, make sure you rotate them so it activates the conditional edge.

The third floor will house most of the main bedrooms. When furnishing the exterior bedrooms, it’s easiest to place a locker first- then the single door frame. It’s not impossible to place the locker after the fact, but it may result in more suicidal tendencies.

Next up is the open core expansion. Make sure the wall frame is rotated correctly so that the conditional edge is present. Place a triangle roof to open the bunker. Upgrade these floors, walls, and frames once you get the HQM for it. Again, make sure these conditional edges are present.

In the bunkers, place a salvaged shelf as far left and back as you can. You can comfortably fit 5 large boxes and a large battery for auto-turrets. Follow this placement order to squeeze two lockers, two small boxes and 3 beds into the space next to the bunkers. Furnish the open core as you see fit.

It’s extremely important to pay special attention to which sockets you’re connecting the floor sockets on to avoid gaps and operate the bunkers. For the square sections, this time place a floor frame off of the left socket, with the floor off of the top.

Triangle floor frames will hold auto-turrets. Place triangle floors off of the walls. Upgrade the ceilings of the loot rooms to HQM.

Next we’ll build shooting floor exits and roof access. Finish the rest of the floor. Then, seal the roof.

This time for the squares, put the frame on the socket close to you and the floor on the top. With the open core finished, now is a good time to add ramps to the first and second floor loot rooms to increase raid cost. You should also upgrade the center hexes to HQM.

The Peek Down Battlements

Next, we’ll build the wide gapped peek downs. With the shooting floor established, we can now connect the breach peek flank towers. Alternate towers with door peeks and roof accesses.

Put a single locker and bed in the bottom section of the tower for your best beamers. Utilize more electrical deployables on the wall frame sockets to prevent players from building twig.

To split your loot further, build three additional roof bunkers on top of the base. Remember to rotate the wall frames to activate the conditional edges. While the bunker is open, place a triangle floor frame off of the floor socket to close the gap above the bunker wall.

To access the loot on the other side, flip the roof. Some additional upgrades include swapping these windows and doors with armored variants.

Build windmills towers on top of the base in these spots. This triangle in the first floor is a good spot for one of the less critical auto turret circuits.

The other three critical auto turret batteries should go in the open core bunkers. One extra battery can go in a jump up for CCTV cameras and other non-essential electricals.

As for turret locations, use 6 in the lower compound6 in the breach peek towers3 in shell3 in peeks6 to 12 in open core3 in open core peeks3 in shooting floorAnd 6 on roof.

While I personally don’t recommend using a China wall, you have the option to seamlessly incorporate one if you have the space and resources for it. Don’t place the gate too deep into the walls.

If your foundations are too low, sometimes the barbed wire from the wall below will slice you through the floor. For troublesome spots, you can use a deployable like small boxes to elevate the player model above the hitbox.

Use twig to help place metal barricades off of the china wall. Each side uses exactly 10 metal barricades for a total of 60. And with that, the base is complete. While it may seem excessive to some, for organized groups it strikes an excellent balance between features, raid cost and quality of life.

Enormous thanks to my teammates who created the base and allowed me to publish a modified version to share with you all. And a special thank you to these people who also helped make this video possible but with that being said, I hope you enjoyed the video. Consider subscribing for future content and I’ll see you guys next time. The Wendigo Small Group Base Design (2021) 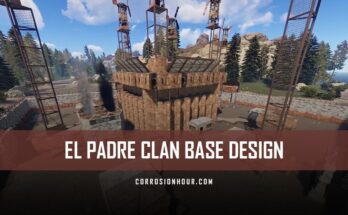 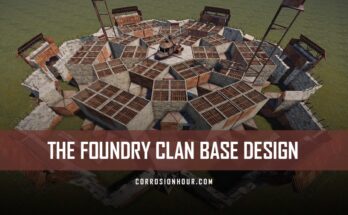 The RUST Foundry Clan Base Design (2019)