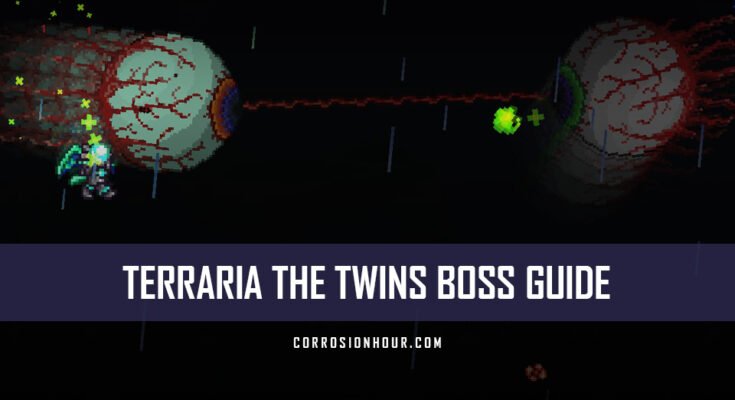 When one Eye of Cthulu isn’t enough, The Twins are here to fit the bill!

Here’s how to take down the deadly duo! 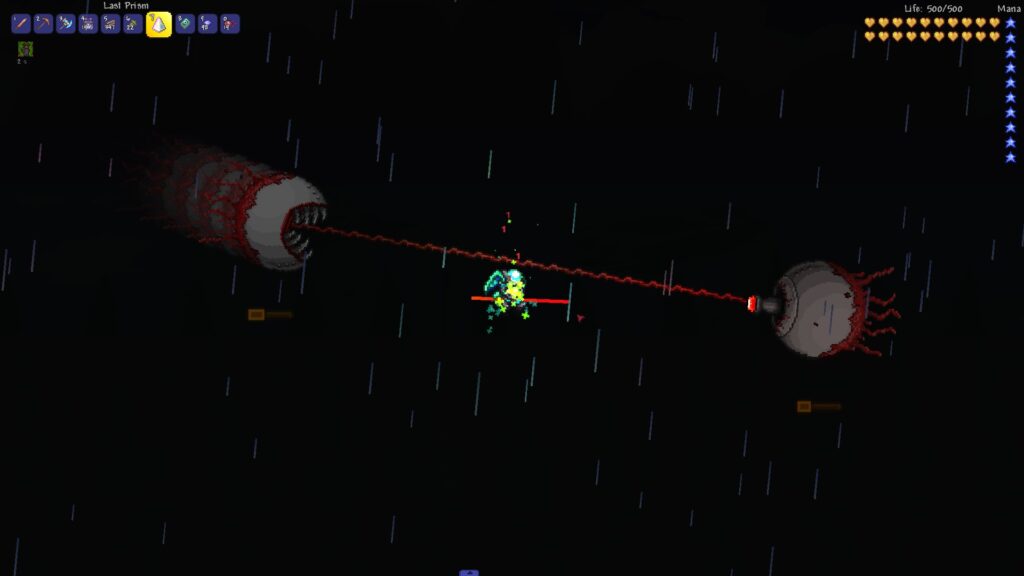 What the boss, The Twins can do

This boss is unique, unlike the Eye of Cthulhu, given that each of the eyes behaves differently and therefore needs different strategies.

The eyeball can attack the player either by ramming the player or firing high-speed laser beams. While it doesn’t damage his counterpart, the lasers can be much harder to evade, given their speed.

In the first phase, the eye will charge its laser blasts while aiming at the player diagonally.

In phase two, the boss will alternate between slightly faster laser beams and a rapid-fire attack. The lower its health, the quicker it shoots, so watch out!

This eyeball can do a fair amount more damage than the other one with its cursed flame and ram attack. While the fire itself hurts more than the laser, it moves much slower by comparison.

That said, it can inflict a debuff capable of doing a large amount of damage over time and preventing healing entirely.

Spazmatism can ram the player much faster compared to Retinzaer. Phase two of the fight has this eye transforms its fire attack into a flamethrower of sorts.

His ram will also be MUCH quicker, so you’ll need your movement to be on point.

More than any other fight so far, you want to have good speed to deal with both of these creatures. Packing some swiftness potions in addition to iron skin potions can massively increase survivability against The Twins.

This battle is one instance where you won’t need a piercing weapon either as you want to take down the eyes one at a time. If you have a ranged weapon with ranged capabilities like the beam sword, you can make menuing much less needed here as well.

Before starting the battle, make sure you have a long sky bridge built for your arena to give you enough room to move. 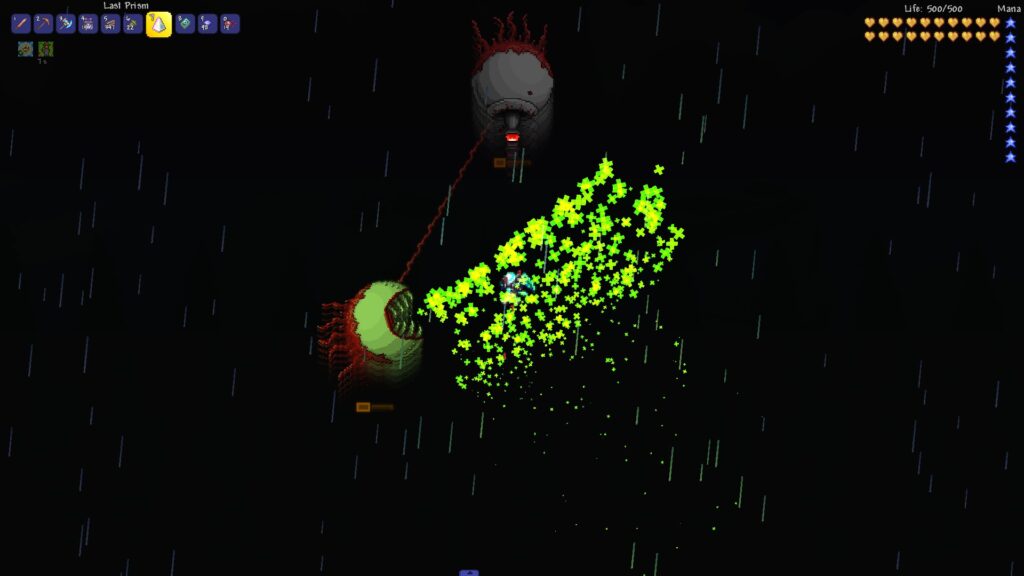 As the fight begins, you’ll have the choice of which eye to fight. In this instance, we’ll focus on taking down Spazmatism first, as the cursed flame debuff can make things much harder over time.

Take shots from ranged gear during his cursed flame attack and retaliate after his charge move. You’ll need to keep a mindful eye on the laser beams from the other eye as you do this. If you have a close-range weapon such as the quad barrel shotgun, you can try to shoot him after a charge.

For phase two, you’ll want to be extra careful of the constant stream of fire and take shots while dodging. If you have a multilayered arena, try dropping below or using a ceiling to deal with the projectiles.

Once Spazmatism goes down, it’s just the other eye now. Top yourself off with healing potions before the boss’ health dips. Dodge his lasers similar to the other eye, but don’t hesitate to get in a few more hits after its charge, especially that it is slower than the other eye.

In phase 2, you’ll want to drink a swiftness potion to keep up with the barrage of lasers.

Contest the eye with your ranged tools along with dodging accordingly, and you’ll have conquered both the fiends.

Congratulations on taking down not one eye, but TWO bosses! Be sure to check out the rest of our Terraria guides!

If you really get stuck trying to take down The Twins, there’s plenty of video guides out there to assist you.