The giant Skeletron himself is the dungeon biome’s gatekeeper, and to get to the depths, and you’ll need to take him down!

Let’s take a look at how to do that in this Skeletron boss guide. 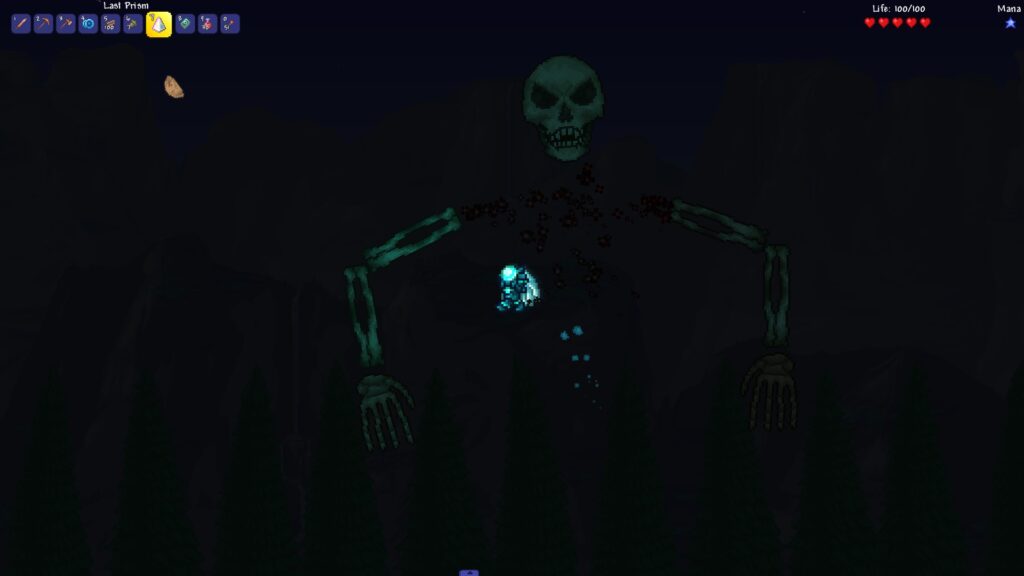 What the boss, Skeletron can do

Composed of a giant skull and two hands, Skeletron can deal with some powerful attacks. While you only need to defeat the head to win the fight, the hands can slash at the player in addition to going through the terrain.

The hands cause contact damage regardless of whether they are lunging at you, while the head can make a spinning attack. If the boss manages to survive until dawn, he’ll begin to use the head spin attack, which can do significant damage.

Skeletron can use a homing skull attack in expert mode, which can easily lock on to the player for surprising damage. He’ll have higher health and defense as well.

Melee weapons such as a sword can effectively deal with the hands but can prove dangerous when faced with Skeletron’s head spin.

Ranged weapons typically fare better here as they can put pressure on the boss while allowing you to watch his erratic movements. Items with bouncing or piercing properties such as the Vilethorn or chakrams can help knock out the arms while also hitting the head to progress the fight.

You’ll also want a healthy amount of blocks beforehand to set up a sky arena to fight Skeletron as it can give you better mobility to dodge.

Before starting the fight, build two long rows of platforms horizontally in the sky. Make sure that there is enough space to jump between them to dodge Skeletron’s hands.

If you have any iron skin potions, use them beforehand to get a defense buff. If you have any spiky balls, leave them on the arena platforms to lure Skeletron into them.

When you’re ready, talk to the older man near the dungeon and prepare to fight. 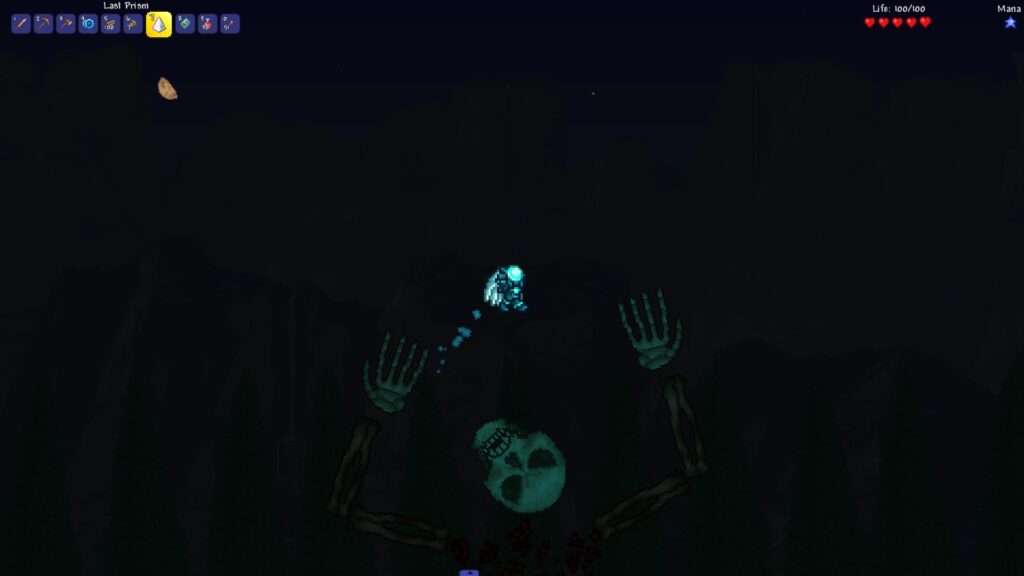 When the fight starts, back away from Skeletron immediately and retreat toward your sky platforms to a better position.

He’ll be closing in quickly and will more than likely lunge his hands toward the player. If close enough, melee the hands while distancing yourself from the head. If you have any piercing weapons, line them up to hit the hands while aiming toward the head.

When he begins to do his head spin, that’s your chance to rack up damage from afar. His head spinning attack causes his defense to drop by around 10 points, along with him moving much slower overall.

You can use this time to get better positioning and run away from his hand attack, which he’ll do shortly after. Rinse and repeat while healing accordingly, and you will slay the Skeletron!

Upon doing so, you’ll now have access to the dungeon and its hidden secrets.

There are plenty more bosses where Skeletron came from, and we have you covered. Make sure to check out our other boss guides here!

If you really get stuck trying to take down Skeletron, there’s plenty of video guides out there to assist you.