The Pumpking cometh and is ready to take down any naysayers who dismiss Halloween!

Here’s how to take Pumpking down! 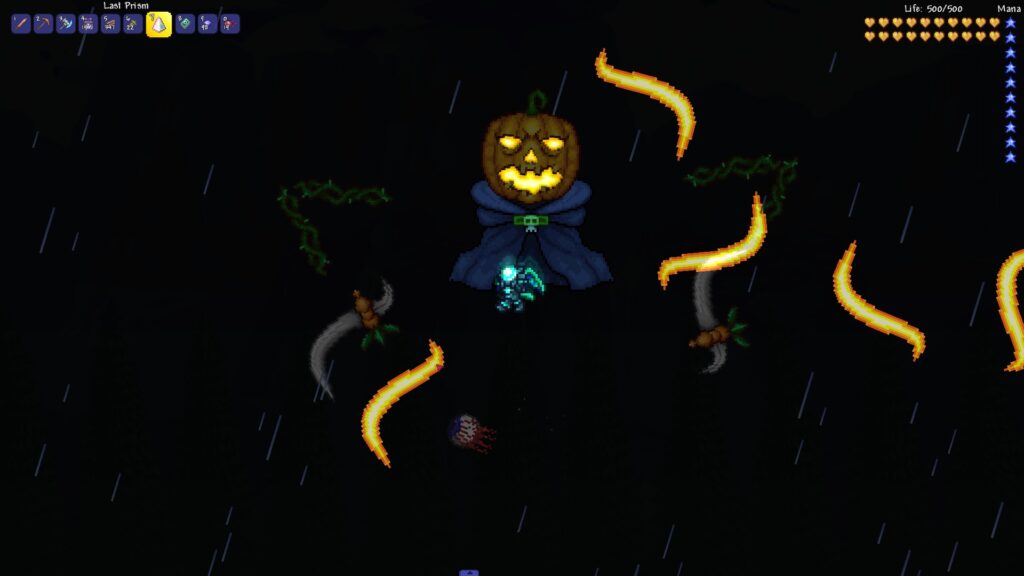 What the mini-boss, Pumpking can do

Pumpking’s most unique aspect of him is how his different faces affect his attacks. His hands can hurt the player on contact by swiping at them, but unlike Skeletron, you cannot damage the hands. His head is his only weak point.

He has three unique faces that look like a traditional jack o lantern, a slightly more open mouth, and a shocked expression. The familiar face focuses on sticking to the player while slashing intensely at the player.

It’ll eventually crank up the speed and lunge, which may be hard to dodge. Its open mouth face can shoot fire scythes, which stand still for a brief moment before targeting the player. These scythes HURT, so watch out for them.

The shocked face will shoot fire from above, linger on the ground and cause the on-fire debuff. Watch out as there can be multiple Pumpkings throughout the fight, and they can overwhelm you.

A new enemy type is called the headless horseman, which will charge toward the player and jump over terrain.

Like other wave-based bosses, make sure to have a healthy supply of piercing weapons to try and hit as many goons as possible. You can’t go wrong with the Daedalus Stormbow with a combination of holy or jester arrows.

You can also use sentry-styled weapons to clear the waves while focusing on more challenging foes like the mourning wood and Pumpking. If you do want to melee the boss, the influx waver is always a good choice with its excellent range.

Make sure you have plenty of sentry magic set up and ready, along with either spiky balls or wire traps for additional enemies. Wings can make dodging easier as well.

Depending on the number of enemies, you’ll want to either equip your Stormbow to try and get some collateral while aiming at the Pumpking. Your best chance to hit him is during his flame scythe attack, as he’ll be a lot less mobile by comparison. 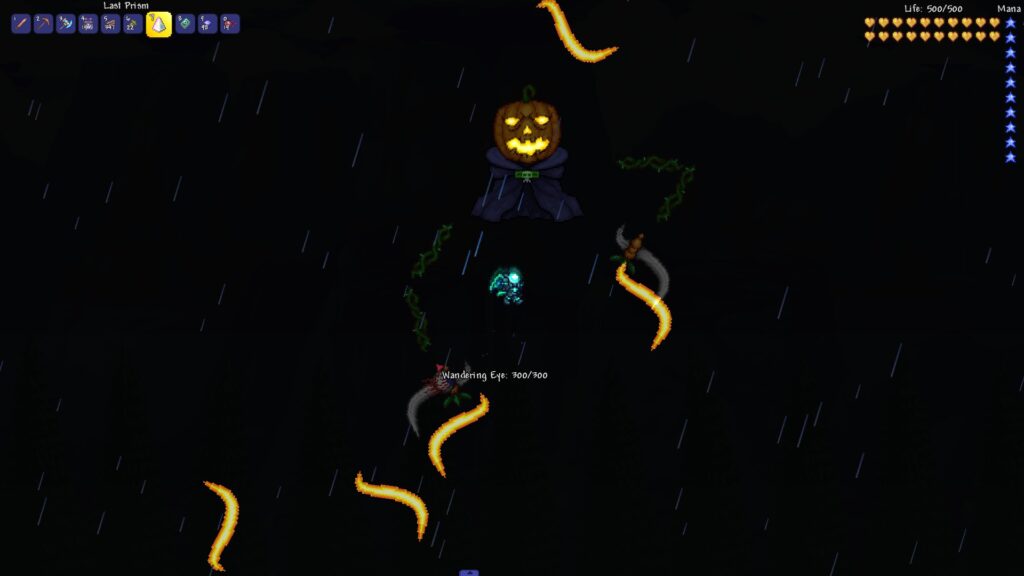 Lay waste with your influx waver while also being mindful of the location of the flame scythes. Prioritize dodging them as they will contribute to the bulk of the damage. When his surprised face appears, you can shoot him from afar as you’ll want to dodge out of the way once the fire inevitably lands.

You can aim for shots for his angry/regular face, but you’ll want to watch out when he speeds up as the damage can add rather quickly. If you feel that the standard enemies are overwhelming you, don’t hesitate to knock a few of them out!

This fight can feel a bit hectic, but as long as you adjust your priorities depending on the face, you should be fine.

With the Pumpking down, there’s nobody left to trick you, so claim your newfound treats as a reward. Be sure to check out our other boss guides to take down even more eldritch horrors!

If you really get stuck trying to take down the Pumpking, there’s plenty of video guides out there to assist you.