The time has come to go toe to toe with the Moon Lord himself.

The Moon Lord is Terraria’s final boss and often considered to be the most difficult. Once you defeat the Lunatic Cultist, destroying the 4th and final Lunar Pillar will summon the Moon Lord, so make sure that all of your preparations are made in advance.

Here’s how to take down Terraria’s ultimate boss, The Moon Lord.

A successful Moon Lord Terraria fight starts with thoughtful preparation. Before taking on this boss, set yourself up for success by doing the following:

What the Moon Lord can do

The Moon Lord is capable of a wide variety of attacks. The creature has four separate body parts with demonic eyes on its hands and head.

The hand eyes can shoot phantasmal eyes that do massive damage along with summoning around six of them in the sky. Once all of these appear, they will descend on you from above in a diagonal fashion.

They can also summon phantasmal spheres, which home in rather quickly and can slowly pile on the damage. The head eye can use a phantasmal deathray, the single most damaging attack in the game.

Thankfully if you have a ceiling above you, it WILL block the deathray. The Moon Lord uses this move whenever the eye on his head opens. It is essential to keep in mind that these eyes can only be damaged when these eyes are open.

One other to beware of is that once you kill the eyes, the moon lord will summon an unkillable enemy known as the True Eye of Cthulhu, which will mimic the other attacks.

It’s better to try and knock out the eyes simultaneously to prevent dealing with multiple true eyes. When you’ve taken down the head and hand eyes, the body will appear, and you’ll have to deal with an onslaught from the other eyes.

You’ll also want to beware as he can inflict the moon bite ailment, which will completely deny your healing.

More than any other fight, you will want to bring every helpful consumable you have available. You’ll want to pack ranged weapons as they’ll make it much easier to focus on dodging and surviving the attacks.

Area of effect magic can also work but timing it when the eyes open can make things difficult. You’ll want an arena that offers a ceiling in some parts to help deal with the death ray as well, along with a nurse to heal you throughout the fight.

If you have the Master Ninja Gear, you’ll have significantly more evasion during this fight.

Equip either the vortex beater along with some chlorophyte bullets to help with accuracy or the solar eruption, as you’re going to want to be ready to dodge at a moment’s notice. When the boss is preparing his phantasmal eyes, you’ll have an excellent opportunity to gun him down to rack up damage. 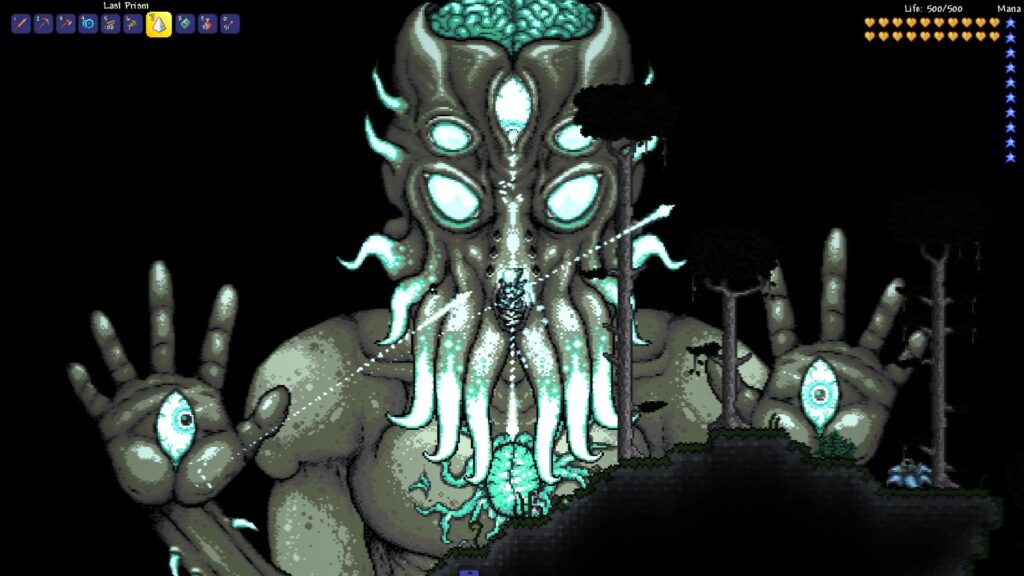 You’ll want to dodge opposite the direction of where the eyeballs spawn, so if they generate from the top right, you’ll want to make a beeline for the left. You’ll need to focus on moving quickly to avoid them as their speed is fast for the bolts. The master ninja gears can help to evade these better.

You’ll want to give yourself adequate space to maneuver around the eyes and bolts as they can blindside you if not prepared.

If the deathray targets you, swiftly retreat under a roof to help prevent it from hitting you. Once you get one of the parts low, try to focus on another one, not to deal with the true eye.

Once all the pieces are short of health, eliminate them with your weapons in quick succession. Now you’ll be dealing with the true eyes of Cthulu with faster attacks. Thankfully the death laser doesn’t go as far, which will allow you to outrun it.

You’ll need to focus on the core of the body while watching out for the three eyes, which will attack in unison. These attacks are quicker than before so opt to use either Crystal or Chlorophyte bullets depending on if you have some downtime to get a clear shot.

This phase can seem arduously long, so you’ll want to heal when you can, along with being mindful of when to either fly, dodge or to run away.

Eventually, you will overcome these grueling odds, and you’ll have slain the Moon Lord and have surpassed your most significant challenge.

It’s been a long time coming, and seeing our growth as a player has been incredibly satisfying. We’ve taken down so many bosses, and now that we’ve finally beaten the Moon Lord, we can say with confidence that we’ve conquered Terraria.

While we’ve faced our most formidable foe, there’s still more fun to be had with event bosses, crafting, and more.

Enjoy your victory and revel in your accomplishments as you are the new master of Terraria!

If you really get stuck trying to take down the Golem, there’s plenty of video guides out there to assist you.