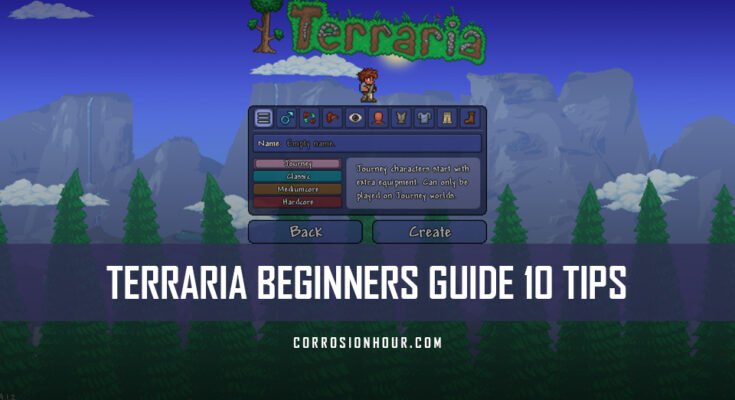 With such a vast and expansive world to explore, players may feel overwhelmed with all of Terraria’s various mechanics.

Starting up a new survival game for the first time can be overwhelming. Many survival games have rich crafting systems and nuances that take a considerable amount of time to master. But never fear, today we’re here to make things a little bit easier with a bona fide Terraria beginner’s guide! This guide will outline a few high-level basics you should concern yourself with when starting a new game of Terraria. Rather than get lost in time and spin your wheels and succumb to that feeling of going nowhere, this quick guide will help provide a simple direction to follow for a game that’s so incredibly expansive!

If you’re completely new to the game and haven’t heard much about it, be sure to read our Terraria review to learn what you’re getting yourself into!

The absolute first thing any new Terraria player should do is to build a home. You will likely make your first home out of wood, but you can upgrade it with more durable materials to prevent fire and dynamite from ruining the upholstery. Get the basic structure down first using wood and you can go back later.

We recommend having several rooms in your house as it can allow NPCs and merchants to take up residence for future extortion’s, ahem, transactions.

Depending on the difficulty mode, you can lose your coins or items upon death. Classic mode has players losing anywhere from half to all of their coins, depending on the world’s difficulty.

Medium-core mode has players losing every single item when dying, and if it happens to land in a lava pit, those items can be gone for good!

Players can craft storage boxes to keep their goods in the event of a disaster. Who knew a small box could provide such insurance?

Terraria’s cave system’s deep underbelly can be incredibly dark and nearly impossible to see without a good light source. Torches are a player’s best friend while underground, and they can be put down on the environment to double up as guideposts to denote where you’ve been.

There are also glowsticks that the player can throw, which function underwater. You can even make gear to help, such as a headlamp, which frees up your character to use a weapon or pickaxe. But this Terraria beginner’s guide wouldn’t be worth squat if we didn’t stress the fact you can’t have enough light sources available!

Mining can easily take up the bulk of your time in Terraria, and for a good reason too. It’s rewarding and dangerous. One of the best ways to help with this is to make a Hellevator.

A Hellevator is essentially a mine shaft that leads straight down and can often have small steps on the sides to prevent fall damage.

A Hellevator is an excellent means of traversing through several underground biomes in seconds to help you get better materials. However, you decide to build a Hellevator, make sure to have some water toward the bottom to break your fall.

Your tools of the trade are capable of netting you some pretty epic rewards, but did you know that you can upgrade them?

Terraria’s tools follow a hierarchy in that the better the pickaxe, the more types of ore and blocks you can break. For example, a molten pickaxe has a much faster mining speed and damage than a regular pickaxe.

To upgrade your weapons, you’ll need to craft an anvil, and you’ll need the appropriate materials to do so. Or you can grab a reinforced fishing pole with some bait, catch a Reaver Shark, and mine that way!

Many foes lurk in the darkness of the night, and even the surface is prone to these dangers. Take caution while exploring at night as specific events such as the blood moon can cause enemies to be more aggressive and spawn in waves.

Staying near your shelter is one of the best ways of having a safety net as you’ll have some gear in your chests.

If you happen to have an item called The Enchanted Sundial, you can skip to the next day. Beware, as this has a cooldown of one in-game week!

7. Use the right weapons

As tempting as it is to use the wooden sword to carry you through the endgame, Terraria has a massive list of weapons to use.

When you get new materials, head to a crafting table to see what you need to make the next tier of weapon.

You’ll have options to use melee weapons such as swords and spears and even a yoyo to dispose of enemies.

You’ll also be able to use ranged weapons such as bows, guns, and rocket launchers. Lastly, magic can be as simple as a magic missile to shooting swarms of bees at an enemy.

Each of these weapons has a time and place, and it’s good to have a weapon for every situation.

8. Max out your health and magic ASAP

Upgrading your magic in Terraria can be done by collecting the falling stars during nighttime. To make this easier, set up a sizeable horizontal platform relatively high above and patrol the path to grab any loose stars.

After collecting three stars, open up the crafting menu to make a crystal star, increasing your maximum mana.

Upgrading health requires the player to find and destroy various crystal hearts found throughout the underground. When you find one of these statues within the world, use your pickaxe to break them, and you’ll see a life crystal emerge.

When you use it, you’ll gain another heart on your heads up display. Who knew exploring could be good for your health?

9. Bring some friends along for the journey

While Terraria can be almost meditative in a solo setting, the game thrives in its multiplayer components. Having a helping hand with base building, resource management, and fighting can make things significantly more comfortable.

You’ll be able to cover more ground with more players in addition to the comedy that multiplayer naturally brings with it.

10. Find and fight the many Terraria bosses

Arguably one of the fascinating aspects of Terraria is its bosses. Ranging from giant skeletons to massive eldritch abominations, bosses can drop some of the best loot for players.

Before taking on any of them, we recommend having a healthy dose of healing and attack and defense items to ensure success. You’ll want to bring your best gear for each of these encounters, as death can come at a high cost.

The end of a Terraria beginner’s guide, but you must go deeper!

Discovery is one of the best parts of Terraria, along with growth as a player. As one of our favorite entries in the survival genre, we hope this Terraria beginner’s guide helps you find your way through the depths of Terraria!