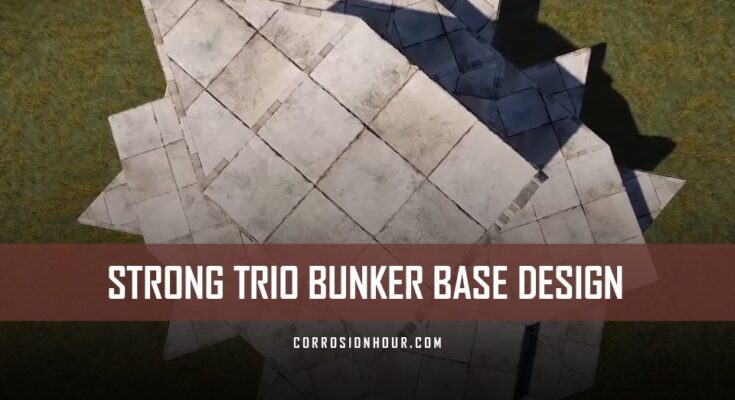 This RUST strong trio bunker base design video is brought to you by our partner xRaw.

This RUST base design is ideal for solos, duos and trios due to being easier to build and maintain. The starter-to-main design features a large number of large boxes, loot spreading to increase raid cost, compact item placements and undrainable shotgun traps.

And now, check out this Strong Trio Bunker Base Design. Cheers!

Hey guys and welcome back to another video. In today’s video we’re looking at another rust base design which goes from a starter to a main base. This base can be used for solos, duos or trios and contains features such as a bunker entrance, loot spreading and a large amount of storage.

Just before we start, around 87% of you watching aren’t subscribed, if you do enjoy my content don’t forget to subscribe to catch all of my future content! I do also have a discord channel which will be linked below for anyone wanting to join. Now, lets get into the video.

Just before we get into the tour, these are all of the items inside of the base. We have three sleeping bags, one campfire, thirteen furnaces and your tier three and tier two workbenches. Your tool cupboard, research bench and three shelves, six shotgun traps, four small boxes and finally seventeen large boxes. All of which fits into the footprint shown here with the loot rooms highlighted in metal.

Heading over to the base here, we have stairs for getting up to the entrance. This is a quick and easy method, which isn’t very safe. For a safer entrance, simply build an entrance off to the side like I show here. You could repeat this on multiple sides of the base if you like to have multiple entrances. Onto the roof here, we have plenty of room to add window frames and create a shooting floor should you choose to, or, you can expand to gain an additional floor to get more storage.

Coming over to the entrance here, we have a sheet double door to get inside quickly, followed by some shotgun traps and drop boxes. To progress further into the base, you need to go through the sheet door which is also protected by shotgun traps. It’s also blocked off by the bunker entrance which is the roof piece here. The sheet metal triangle overhanging here is intended to try and block rocket splash damage from hitting the square roof piece below the slanted roof. And as you can see here, it would be rather difficult for raiders to get a good shot without taking damage.

To open the bunker up, simply destroy the twig floor as I show here. This will lower the stability holding the roof and cause it to drop. This can be replaced easily at any point. Once this is removed, you can gain access in and out of your base as normal by jumping up this chute here.

On the right side of the base here, we have two loot rooms. With some space in the middle filled by 5 furnaces and 2 sleeping bags. I’m sure you can make better use of the space if you choose to. The first loot room here contains five large boxes and a furnace. You can make use of Evilwurst’s 7 box loot room here again to gain more storage.

On the left side of the base here we have another two loot rooms with a space in the middle again filled by five furnaces, a sleeping bag and a campfire. Both loot rooms here are filled with five large boxes and a furnace.

And finally, in this final loot room, we have three small boxes, a large box, your tier two and three workbench and your unlootable TC, which is hidden behind your tier three workbench. Even if raiders are able to locate the TC, it will cost them a large amount of resources to raid into this area.

To seal up the bunker, simply place twig floors as I show here. Followed by a roof piece. Upgrade the roof piece to whatever grade you like and the bunker will be sealed as you can see here. Dependent on whether you upgrade to stone, metal or HQM the raid cost will increase by that amount.

The footprint of the base is simple. Beginning with a square and two triangles for your starter base, before expanding out to add a loot room. And then again to add two more loot rooms and the bunker entrance before finally adding your honeycomb.

To break down the raid cost, this is the cost to raid directly to your TC, and this is the cost for all of your loot. This base is going to cost you 7k metal, 5k wood, and 19.5k stone with an upkeep of 1.9k metal, 7 wood and 3.4k stone. A more detailed costing can be found in the comments to include all of the deployables used as well. 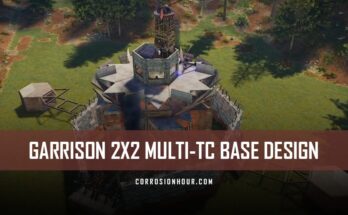 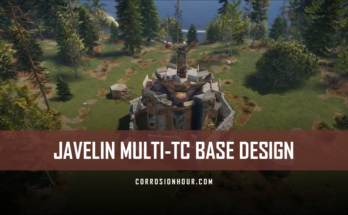 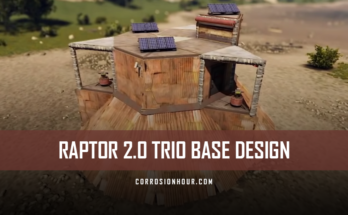 The Raptor 2.0 Trio Base Design