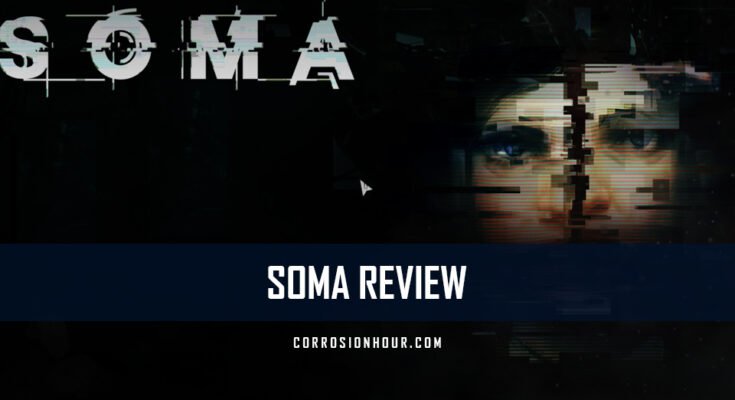 SOMA breeds a suspense-filled science-fiction-themed circus of dread steeped in an unsettling atmosphere and nerve-shredding tension.

Developed by the team behind Amnesia: The Dark Descent, SOMA follows in its predecessor’s footsteps. Throughout the game, the player must ponder a series of existential questions. As it turns out, SOMA is a thought-provoking voyage into the mysterious nature of the human psyche. As a result, all too often, you’re left tackling profound issues about the ambiguity of consciousness.

But also the obscure link binding body and mind. In all but every sense, SOMA is as much a pure breed psychological survival game as it is a masterful scare-fest, full of well-devised jumpy moments. These work side-by-side with scream-inducing scenes of horror.

But before we delve into the dark and despicable nature of SOMA, let’s create some context. SOMA starts in an abandoned underwater research facility. Not before long, we catch up with SOMA’s protagonist Simon Jarret, who must make his way through the mysterious facility upon finding himself in unfamiliar territory.

Along the way, he’ll have no choice but to shed light on its curious past. While grappling a strange phenomenon at the same time, in which the facilities’ mechanical inhabitants have seemingly taken on human characteristics. Spooky stuff indeed.

In truth, a large part of SOMA’s strange allure derives from its ambiguity. And so, this sense of uncertainty makes each moment from the next, tense and terrifying, in equal measure.

The concept of SOMA is a simple one. At least on the surface. Much like Amnesia: The Dark Descent in many respects, the player must hunt for clues. Often, these take the shape of notes and audiotapes. Both of which coincide with the core story, providing insightful context as you go.

Other than that, like previous games, player progression centers around puzzle-solving and exploration sections. However, you’ll also require the use of stealth. With that in mind, evasion is key to the player’s success in SOMA. Fail to slip by any monsters, and you’ll most likely meet your maker — just a cautionary word of warning, folks.

Besides, I couldn’t let you dive down the rabbit hole without telling you what’s in store. That would be neglect on my part. Sorry, I digress. Let’s get back to business.

On the visual side of things, SOMA isn’t exactly triple-A quality. But in hindsight, that’s to be expected. If for no other reason, then because Frictional Games is a small, indie-based dev team. Even so, in my eyes, the graphics here hold up well when all’s said and done.

The way I see it, there must be a trade-off somewhere down the line. On that note, a tiny shortfall in graphical fidelity is a minute price to pay. Compensating for this shortcoming is a profoundly captivating story, which runs in direct unison with SOMA’s gripping gameplay.

Well, that’s my take on it, anyway.

Despite this, SOMA’s overall aesthetic complements the survival horror genre to significant effect. Primarily, that’s due to its gloomy outlook and primitive palette scheme. In short, SOMA somehow manufactures a sense of unease using visuals alone. That’s no easy feat.

That brings us aptly onto the sensory-inducing subjects of sound and atmosphere. Like other famed entries stockpiling the developer’s resume, sound design is pivotal to the player experience. In SOMA, throughout the entirety of the game, the sound design is superb. Thus, lying at the epicenter of immersion.

What’s truly unique is just how much of the sound is grounded in reality. In truth, it’s the small things that have an accumulative effect on the mind. For instance, the faint sounds of footsteps have thousands of different variables, depending on the room size. This aspect of depth is mirrored in other ways, also.

Things like booming echoes resonate deeply within the soul while expertly demonstrating the vacant and imposing nature of Pathos-II as an enclosed structure. This acute attention to detail concerning sound instills SOMA with an added sense of realism. A fact that remains true all the way through.

Above all else, though, the voice acting is a cut above. Hence, making each interaction a visceral experience. Coupled with that is the underlying ambient soundscape, which lends itself to its ambiguity and mysterious environments. All in all, I’m mesmerized by the sound of this game.

For me, it’s easily one of SOMA’s standout features. Well, one of many, of course.

Next up, we have gameplay. In contrast with stereotypical survival horror cliché’s and conventions, SOMA does away with item management. Instead, shifting the focus towards narrative aspects of the game. Even so, you’ll still need to make use of stealth to bypass the beasts that block your path.

In keeping with tradition, though, the player can expect a handsome host of puzzles to crack. These vary from bite-sized brainteasers to other, more elaborate riddles. Either way, they’re fun, for the most part, and correlate with the core story in engaging ways.

In short, for those that tap into SOMA, as a concept, its impact is everlasting. An interesting exercise in psychological horror that never lets up, leading to lasting side-effects long after completion.

For fans of the genre, SOMA is well worth the cerebral investment. But it’s an experience best served the first time over. In my view, I can’t speak highly enough of SOMA. With that in mind, I’d urge anyone, especially those wishing to escape their comfort zone, to give this one a go and make sure your environment is prepped for it.

On reflection, perhaps SOMA’s replay value is low. That said, as a one-off, it’s a must-play and well worth the time investment.

All in all, SOMA reflects Frictional Game’s natural talent for conjuring a sense of suspense. On top of that, SOMA’s smart story blends well with stark science-fiction themes. All of which culminate to create an atmospheric amusement park of nightmarish terror and all-enveloping dread. If I were you, I’d play this one peeking from under the covers. That’s your safest bet.

What did you make of SOMA? Does it deserve to be the spiritual successor to Amnesia: The Dark Descent? As always, we welcome any views. So, feel free to chip in via the comments below. We’d love to hear from you.