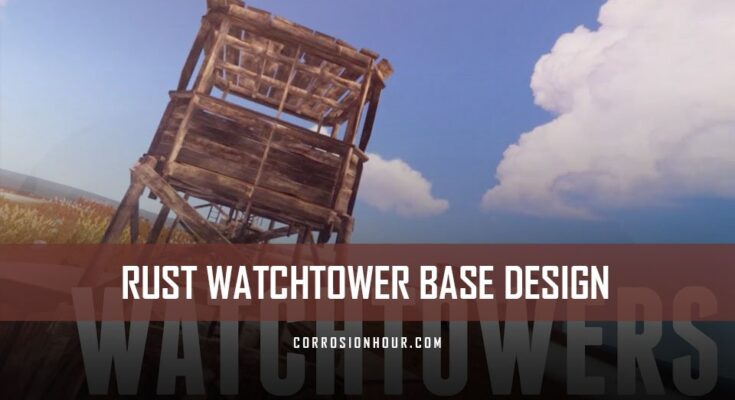 Building a simple base with a watchtower

Vice is back at it again with another quality video. This time he’s covered the new watchtowers, introduced by Facepunch in The Team Update.

While simple and small, this watchtower base design is packed with many expert base building techniques and offers a few different variations in the build for you to chew on. We’ve given it a run earlier today on our main server and it was quite fun to play. Be sure to pay attention and take note of the multiple attack vectors mentioned.

Be sure to browse Vice’s past videos and don’t forget to subscribe to his channel for notifications and alerts on his latest videos.

So today we’re gonna build a simple base with a watchtower, start out with two squares connected by a triangle and close them in. Make sure to leave the sides of the outer square as doorways, and place a double door frame next to them.

Here you can place another wall frame, or a window for extra protection. I’m going to go with the window as it’s more complicated.

Crouch jump up into the window, or no clip through it if you’re bad like me.

In the back of it here we can fit four large boxes and two small boxes next to the TC.

For our doors, we’re going to place a double door opening out, forming a single door airlock and blocking off access on both these single doors here, which we can also place doors into.

Seal up the roof and the first part of this base is done.

Now, if you want some extra space, you can mirror this design going the opposite direction, just use another door frame here instead of a wall. This forces you to have an extra door when starting out, but it’s not a huge issue, as the inner double door will form an airlock by itself.

Here’s how this part is built, exactly the same as the beginning, and we can come and put a normal airlock on the front of the base. I used two doors here but you only need one.

Come up to the back of the base, with the second door frame, and place your watchtower.

Now, this step is optional, but if you want to secure it from nakeds, you can place a wood triangle here. Make sure it is wood, because if someone breaks your watchtower, you’ll have to chop the wood out to replace it. You could leave it without the airlock, but then anyone could get up the ladder. This wood wall here blocks people from climbing it, though, it should be noted that if they have ladders or boost, they can climb the tower, and possibly camp the back door, so watch out for that.

Replace your double doors with garage doors, and the base is mostly complete, just need to furnish it with some boxes, which I managed to fit 9 large boxes and three small in these two 1x1s, along with the TC.

This would be a fairly short video with just this design so I’ll cover some other interesting tricks I’ve found. If you place them right, you can fit six triangles all inside the watchtower, and build walls around the outside. This makes for a pretty cool watchtower base, though the front part does stick out so it’s still vulnerable to someone breaking it.

Here’s another design, place this watchtower as low to the ground as you can, then place a triangle just like this. Not directly in the center, but a little to the right. If you do it right you should have no problems placing walls around it.

Place a square attached to it, a double door on the front, and a single door and walls at the back. Our loot and TC is actually going on the second floor, so place a double door over that and wall it in.

This part’s optional but we can place another set of half walls going up, and triangle floors going off of it, and a door frame here. This will let us block people from getting up and down. You can wall it in, and place triangle floors going all around. This provides a better platform to shoot off of, and lets us put doors or windows all around to close in the tower when you’re getting camped. You should place a roof over this, because the peek down from the top of the tower here is really good.

So this makes for a nice roofcamping tower, but what if someone breaks your tower? Well the cool thing is the tower is only useful when you’re getting set up, after that you can just use ladders and the platform you’ve built up here to shoot off of. It still functions as an effective sniper tower.

Another cool trick is the fact you can place high walls underneath them. This makes for really nice encampments over your walls, but probably lets people ladder up much easier.

So, you can’t place boxes in these towers, so you can’t crouch and shoot effectively. But one thing I’ve found to work is lanterns, place a few lanterns down in the corner and you have a much better peek. Another thing that works is stacking spinner wheels but that’s a little janky.

So yeah, all in all, I really like this new deployable, even just standalone, being able to carry one of these like a high wall and just deploy it in gunfights is going to be really interesting. I would love for them to add a stone equivalent that can’t be chopped down so easily, but I’ll take what I can get.

Sorry for the lack of uploads this week, I have been very busy organizing and moderating the Rusty Cartographers discord, which, if you haven’t seen my streams lately, is the sort of official discord for custom map makers, which they added the ability to make this month. I’ve got some sick ideas for custom maps I’m going to be working on in the coming weeks, so stay tuned for that, in the meantime though you’re welcome to join my personal discord to stay up to date on the latest building tricks, share your own, or just come to hang out. That’s about all for this video, leave a dislike and I’ll see you later.