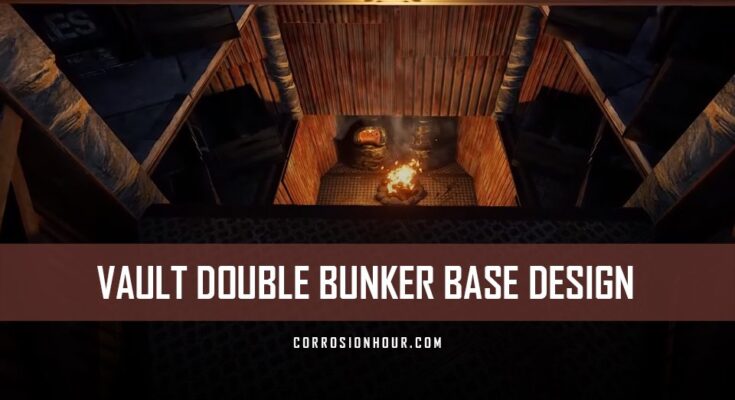 The Vault Double Bunker Base Design

This RUST base design video is brought to you by our partner xRaw.

The vault double bunker base design can be utilized by solo, duo, or trio groups. This RUST base design is effective in securing the loot rooms at a maximum cost to the raiders. Loot is equally spread across the base, rather than storing everything in one primary area. This requires raiders to go the extra mile to fully expend the base.

Inside this RUST base design you will find:

This vault double bunker base design also has the advantage of being easily expanded upon, as it is a “starter to main” build. This means it’s built in stages and each stage is a functional base. Players can live out of the starter portion and expand the base in stages as the resources become available.

Hey guys and welcome back to another video. In today’s video, we’re looking at a RUST base design which goes from a starter to the main base. This base can be used for solos or trios and contains features such as loot spreading and a double bunker.

Just before we start, around 84 percent of you aren’t subscribed. If you do enjoy the content, don’t forget to subscribe and hit the bell to catch all of my future content. I do also have a discord channel, which is linked below.

Now let’s get into the video. A few of you guys have been stating that some of my bases use the same foundation plan and therefore are similar. With the current restrictions to building in RUST, there are a limited number of foundation plans you can do.

So being a base builder is to use current foundation plans, while creating something similar, yet a bit different.

Until Facepunch consider making a change to building in RUST, you’re going to see many RUST building Youtubers using the same footprints as one another across many bases.

Just before the tour, these are all the items inside the base. We have two sleeping bags, four furnaces, and two campfires. We then have your tier 2 workbench, your tool cupboard, and your tier 3 workbench as well as the shelf. There’s 11 small boxes, 6 shotgun traps and then 12 large boxes.

All of this fits within the space of the footprint shown her, with the loot room shown in stone and metal.

Heading over to the base where you can see the entrances are on the top. This means you need a route up.

You can do this a number of ways, but I recommend using one of the two methods I show here in twig. A staircase up to the top is the safer option, but you can also use your roof piece as a jump up for a quicker way.

Once we’re on top of the base, we have all this open space, which you can expand into another floor, or into a shooting floor very easily.

Heading into the base here we have a turret protecting against raiders and door campers. You can put some drop boxes here if you prefer.

To progress further into the base, you need to go via this door, which is clearly blocked by the metal roof piece and is protected by shotgun traps.

This is the first bunker entrance. To remove the bunker, simply knock out the twig floor here, supporting it and you can get in and out of your base as normal. Jumping back down the entrance shoot, you have your first loot area.

We also have an undrainable shotgun trap here, which makes it difficult for raiders to pass here. To gain access to the next bunker, you need to be in the starter area of your base and simply remove the twig wall like this.

This makes the tool cupboard both un-lootable and adds a cost of 330 explosive ammo to this. We then have seven large boxes, one furnace, one small box, and a campfire for storage with some traps to catch people out.

To seal the bunker, simply place a twig wall here with a metal floor piece on top. Then jump up to here, place the twig floor and then add a metal roof piece.

The footprint to the base is simple, beginning with a square and a triangle for your starter base, before expanding out to add a loot room. Then again to add two loot rooms and the bunker. Then finally, adding the honeycomb.

This base is going to cost 7.5k metal, 4.8k wood, and 17.2k stone, with an upkeep cost of 1.8k metal, 9 wood, and 3k stone. A more detailed costing can be found in the comments to include deployable. 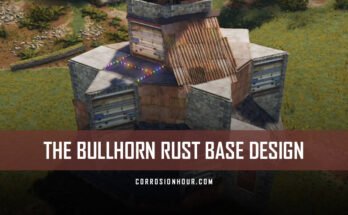 The Bullhorn Trio RUST Base Design (2021)