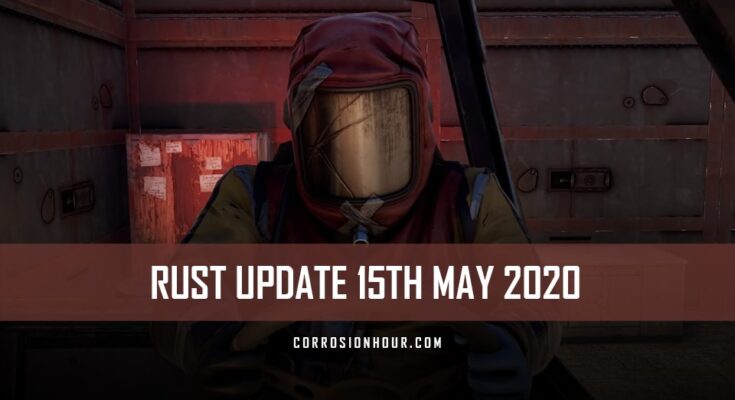 In this RUST update, Shadow Frax has offered us an exclusive, early look at RUST modular cars in a playable state! Modular cars are set to be made available on the Staging Branch on Monday, May 18th and will give players the opportunity to test out the work-in-progress and hopefully provide helpful feedback on any bugs.

Here are some of the highlights of his update:

Greetings survivors and friends, Shadowfrax here, and cars are finally in Rust. Well, not quite. You’ll be able to play with them on Monday the 18th, but I can give you a heads up in advance ‘cos I’m special.

I’m going to show and tell you what I can about them now, but if you’d like to see some more of them in action and grill me for details, then I’ll try to stream them tonight (that’s Friday) over on Twitch from 7 pm British summertime, links down below.

A couple of things that you must note first, though:

Right, so, as mentioned last week, the plan is to allow testing of the new vehicles to begin for all of you lot on Monday the 18th of May, and this will be happening on the staging branch on a separate beta.

Basically, if you own Rust then you automagically have the staging branch in your library, so you can get that installed in advance, then on Monday there’ll be a dev blog released, and that’ll tell you how to switch to the appropriate beta.

The TEAM want to have a decent amount of testing take place on the cars to get feedback, squish bugs, balance everything and make them idiot-proof, which is where you come in… and so for the rest of May and June, they will be confined to the staging branch, before finally being let loose on the release branch in July’s update.. (that’s the one most of you play on normally)

Currently, you’ll be able to find cars in a wrecked state and in various random configurations next to roads.

They’re built on a modular system, and to start with, there are three different lengths of chassis. Short which can hold two modules, the medium which can hold 3 and long which yes.. can hold 15.. I mean 4.

When you find them, they’ll be in a right state, badly damaged, no fuel, and with a complete lack of engine parts. You’ll need to find and insert five different parts to get them working, and these are a carburetor, crankshaft, pistons, spark plugs, and valves.

You’ll discover low tier versions of these in loot, but you’ll also be able to buy tier 2 and 3 versions at the compound which can be researched and crafted. Higher tier parts can make your vehicle faster or more economical, but any tier will make it work, and they can be mixed and matched.

Also, not to be forgotten, you’ll need to shove some low grade in the fuel tank at the back, which can hold up to 500.

When you find a car as mentioned, it’ll be beaten up and in need of repair. This you’ll be able to do either manually by whipping your hammer out and using metal frags and, in some cases, wood or in the comfort of your own garage by using another new item, the vehicle lift.

You’ll be able to buy one of these at the compound at a vending machine just here for 300 scrap.. although the price like everything else is SUBJECT TO CHANGE.

Once you’ve placed a lift in your base (or even outside), simply supply it with 20 power, then drive or push p your old banger onto it. You can then choose to work on the vehicle which will allow you to repair parts, add, remove and edit the layout of your modules you can strip it right down to the chassis if you wish, but it won’t be able to leave the lift without an engine and driver’s seat.. like duh.

You can’t craft chassis or modules; these need to be found around the world as well, and at the moment, there are ten different modules as follows.

A cockpit, a cockpit with a small engine, and an armored cockpit, all three of which seat a driver and passenger. 2 and 4 seater passenger modules, which means that with a long chassis, you could create something that seats a small ten-man zerg—a large engine module for more power. Single and double module flatbed sections which allow players to stand on the back, but no, you can’t put horses there sadly, a dual-module large fuel tank, which currently only stores water but may store other things in the future and lastly a storage module with 18 slots.

Each module has its own max condition, and these are added together to give the overall maximum condition for the vehicle. If all of the modules on a vehicle reach zero health, then you can no longer drive it. Vehicles currently fully decay within 216 minutes if left outdoors, and this is extended by ten times when kept indoors.

As you can tell, there’s a lot of scopes already for many different designs, and yes, it’s also possible to have multiple engines and even more than one driver’s seat.. with potentially two players fighting for control of the vehicle. What a time to be alive. Literal back seat drivers.

Something else to note is that the types of modules used and their placement will affect the weight of the vehicle and its center of mass.

Driving them isn’t too complicated, just WASD basically, F toggles the headlights, and there’s a fuel gauge like the choppers.

It does hurt players and animals when they get hit with one, as you’d imagine, but the amount of pain inflicted scales with speed, so all the way from nothing up to instant death. And scientists are not immune either.

However, the terrain you drive on does matter, with any off-road driving causing them to lose condition much faster and going over humps and bumps causing quite a bit of damage, the grip on roads is currently 50% higher than off the road too so any ideas of zergs mowing down all and sundry and there being nowhere to hide should be relegated.

Oh, and before you ask, no, you can’t put a lock on them. Not sure if that’ll always be the case, but certainly, at the moment, you’ll just have to take some bits out of the engine to stop randoms from pinching them.

As I say, this is all SUBJECT TO CHANGE, and after all, that’s why there’s going to be substantial testing before they are finally released into the wild, so you can jump on board next week and help to send feedback.

Cars won’t be the only big change coming in July either. According to recent commits, it seems that acquiring choppers is going to change soon, and they will no longer spawn in the world as they do now. Exact details are yet to be confirmed, though.

In works in progress, still lots going on, with new building blocks on the horizon such as spiral stairs and ramps, smart alarms and switches for use with the upcoming companion app, plus a mixing table that seems to be for making teas and granting character buffs.. and I’m hoping to have more details on these soon, so make sure you’re subscribed and leave a like on this video if you’d be so kind.