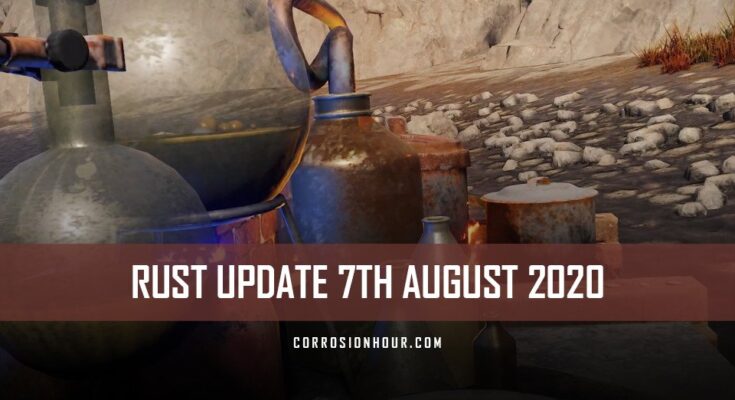 A lot has been happening this week in RUST–namely the addition of the Mixing Table and tea system that has been added to the main branch. In this RUST Update, Shadowfrax recaps for us a great deal of the changes that we saw go live in the monthly update and highlights the changes and modifications made to the mixing table and recipes since the last update video originally published. We saw a reduction in material costs for tea recipes, but we also saw some changes to the explosives recipe for the mixing table, which now match the workbench-version of the recipe.

Greetings survivors and friends, Shadowfrax here with another episode of “let’s recap on everything that was added in this week’s forced wipe but please don’t view this as a complete rehash because some things have changed and there are a few cool works in progress too”.

So first to the mixing table, that universally loved addition to the game, and as I think I may have said last week, it was all SUBJECT TO CHANGE, and change it has.

First things first, despite so many of you liking the idea, explosives now use the same ingredients in the same quantities through the mixing table as they do at a workbench, so no more horse powered raiding for you!

Same thing goes for low grade, which can now be made here, and gunpowder, with the exception that this last one requires 10 less per batch here of that oh so limited resource: charcoal.

You can now thankfully give that tiny brain of yours a comforting squeeze and put it back on the shelf too as the mixing table UI now comes complete with a recipe book, plus all of the TEAS have new more primitive looking icons.

There were some changes to what some of the teas do as well so pin back your ears because I shall say this only once:

Scrap, wood and ore teas’ effects now last for 30 mins a swig instead of just 5, and their values have increased. Basic, advanced and pure scrap teas now give +30%, 60% and 100% scrap yield respectively, wood is the same, and ore is a bit less.

Note though that scrap tea will only yield more from barrels; crates and boxes remain unaffected, as do recycling yields and the scrap exchange. Where incidentally the rates for cloth and corn were nerfed this month and you can see the new values here. Also the wood tea buff only applies to trees, so you won’t get any more of that from a recycler whilst under the influence either.

Anti-rad tea now gives two buffs, with basic, advanced and pure each granting 50% radiation exposure resistance, but also 5, 15 and 25% radiation resistance respectively. Apart from that the rad removal tea was completely.. removed, and healing and max health tea values seem to be unchanged, although all tea recipes are now cheaper requiring only 4 berries each instead of 5.. Plus you’ll see a new notification section if you have any active buffs, just above your health bar.

And as many of you last week pointed out black berries didn’t seem to be used in any recipes for some reason. And now they’re completely gone and won’t even spawn in the world Awwww. I wouldn’t read too much into this apart from that Blackberry pies are also out of the question of course.

Tea may have been the main course, but there were other additions this month. and because it’s dangerous outside, you should probably take one of these with you. The wooden barricade is back after last having been seen in Legacy. Costing less than high external walls and just big enough to cover your massive arse, these are a cheap and cheerful tree shield that cost 250 wood each, decay rapidly outside of tool cupboard range and can be made at a level 1 workbench.

On the subject of protection, we now have a dedicated armored passenger module complete with all the flaps you could ever want or need, and there were a few tweaks to vehicles in general such as reduced collision damage, more durability for engine components, a fix for a bug that meant vehicles would decay too fast indoors and better hill climbing capabilities, plus you can now wedge a car lift into a much tighter space.

If you like to put a hat on your house, then you’ll be pleased to know that conditional roof corners are finally here to make everything look much more pleasing to the brain.. Although as mentioned last week, it doesn’t work for every shape.. yet.

Just a word about performance and optimization now as occasionally you chaps mention it.. There’s going to be more effort to communicate all the small improvements in this area each month on the devblog, and the most recent one shows that thanks to many small adjustments, over the last few months the TEAM’s bench-marking machines have shown an approximately 3ms or 30fps improvement in performance. Add that to this month’s increase of another millisecond through work on monument hierarchy flattening and I think they’ve done not too bad. If you want to see more details on this then I’d recommend heading to the devblog, or just pausing this screen.

There were an absolute plethora of adjustments and fixes, most of which I’ve already covered, but some of the most noteworthy were:

Some tweaks to the summer DLC so that that pictures in frames aren’t so dark, boogie boards inherit 50% of player velocity for smoother transition into the surf and above ground pools have more health.

Horseshoe caves no longer allow you to build in their central pocket, a significant nerf there, so sorry to all you troglodytes.

Bone arrows had the girth of their hitboxes reduced by 30%, and midi binding for both physical and virtual devices is here for cinematographers along with a complete tutorial over on the Rust Wiki (link in the description) where coincidentally you’ll find the details of which app is being used here, because a few of you have asked.

Right! Looking ahead now to works in progress, where the exciting stuff is happening.. and the boat shop and fishing village monument is being worked on still with commits this week also relating to a canoe and oar.. And by that I’m assuming this one, which has been languishing in CONCEPT LIMBO for a mere 2 years or so.

If that’s the case then it’ll be a two man affair with each person being able to contribute to its propulsion, and if the plans for the oar remain unchanged then it might also double as a melee weapon. However, two years is a long time when everything is SUBJECT TO CHANGE, so who knows? I’ll hopefully get more info for you next week.

As well as the cinematic controls mentioned earlier, it looks like work on the movie maker branch has resurfaced, and I can’t wait to see more on this, details still sketchy right now.

And there are some strange commits about a ‘storage monitor’, which I think may have something to do with the Rust+ app. Again, more details will follow as soon as I get them.

Please let me know your thoughts on this month’s patch below, good or bad, there are no right or wrong answers.. and leave a like and sub to the channel if you’d be so kind. You can join me on Twitch for streams and stay up to date with all my content on Twitter, Facebook, Discord and my steeeeeam group. Links below. Thank you to my smashing patrons for their support and I shall catch you all soon.

In the meantime, keep calm and stay Rusty, Cheerio.