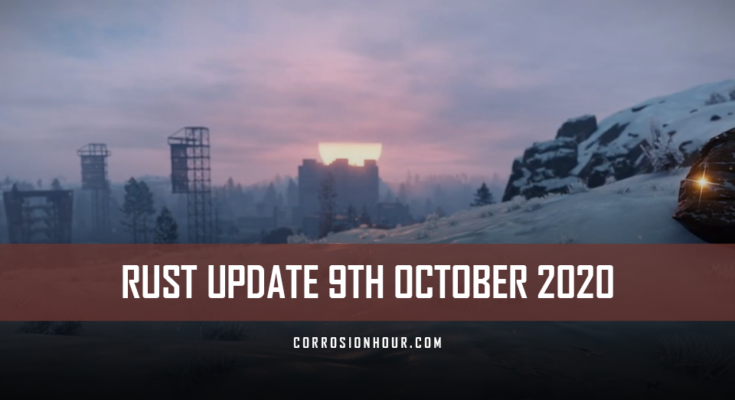 In this week’s RUST Update, Shadowfrax is frolicking through the weather over on the staging branch! The various weather types will cycle in and out, dropping rain in the temperate regions and snow in the tundra regions. Rain will cause players to become wet, but not campfires, and no more rain indoors! (mostly!)

For the server owners, a collection of convars and commands will become available to control the weather and atmosphere. This is also a great feature for content creators who are looking to generate dramatic environments for their recordings, which will soon have the added functionality of camera movement recording in sync with demos.

In other news, progress on the new stables monument has taken form, which we get some glimpses of in Shadowfrax’s video. Perhaps most compelling, however, is the somber news that work on HDRP has been halted due to performance concerns. It seems that the generated assets will be ported into the main branch for use in the game, so all is not lost in terms of gorgeous RUST eye candy.

Greetings survivors and friends, Shadowfrax, here serving you your weekly brain dump known as the Rust Update. And this week, my brain is going to start by dumping on you this fresh steaming dollop of madness, because yes, right here and now on the Staging branch, all sorts of weather and funky atmospheric stuff is rolling in, and there’s a deluge of associated variables and commands for server owners to fiddle and break the game with. Don’t worry; you won’t actually wake up to this sort of sky, I’m just playing around.

This is all a work in progress, of course, and therefore SUBJECT TO CHANGE over the next four weeks, but it does look like we’ll have plenty to talk to each other about after November’s patch to the Release branch.

First of all, as an Englishman, this makes me feel right at home, because soon we will be experiencing the return of rain in Rust. This will automatically turn to snow in the Arctic biome, there will be fog and wind as per, plus now a chance of thunder and lightning, and auroras at night, again in the Arctic biome, which seems like it’ll soon be a much more desirable place to live.

All of this will be randomised, although exactly how random it will turn out to be and how long each weather type lasts is also still SUBJECT TO CHANGE.

There are currently 7 different weather presets that will be taking turns inflicting themselves on us, and these are clear, overcast, fog, dust (which is basically beige fog and which should make city dwellers feel more at home), rain clear, rain foggy, and storm. And I must say that I’m a bit disappointed. I would have expected at least 14 different types of rain presets from a British company. I mean, where’s drizzle, spitting, stair rods, and let’s not forget ‘wet rain,’ shall we?

Anyway, a few things you should know about precipitation.. 1 it will make you wet.. (although snow won’t because it’s so fluffy), it should now fill up water catchers, it doesn’t put out fires, and it doesn’t rain indoors (although there are some edge cases). Also, lighting won’t hit things, it’s just a distant effect, at the moment, and in case you’re wondering about all this, performance does seem to be a ton better compared to the old rain, although I’m sure we’ll get some actual numbers from the TEAM in due time.

Apart from the weather deck shuffling and dealing us different hands of varying wetness and visibility, server owners will be receiving a whole slew of variables to mess around and control most aspects of the climate with. And I’ll put all of these in the description for you, but in brief, there are atmosphere commands, which will include: brightness, contrast, directionality (not sure about how that one works, to be honest), Mie and Rayleigh scattering.

Clouds can be tweaked in a number of ways, including attenuation, brightness, coloring, opacity, saturation, scattering, sharpness, and size. Fog, rain, thunder, and wind can all be controlled separately. And lastly, it’ll be possible to reset the weather, load a preset and order a forecast which will tell you the previous, current, and up next conditions.

Just note that these are all replicated convars and commands, so you’ll need to use the prefix ‘sv’ to run them from the client. Stay tuned and make sure you’re subscribed as I will be bringing you regular reports on how this all progresses over the next month.

In other news, there will be a mandatory update on Oct 26th, which will probably be for the seasonal content. There were a few fixes and changes made including, increasing the brightness of the map on the death screen, the attack sound of the M39 being fixed when using a muzzle brake, and a fix for being unable to deploy counters on the outer sides of armored walls. Wow!

In works in progress, there’s quite a bit going on with the new Stables monuments, of which there will be a couple of variants, and I have some shots of how they are progressing currently for you this week. These will be very likely where horses will eventually start hiding behind a scrap wall. and commits show that we’ll expect to find such thrills as static hitches and troughs, dung piles, and NPCs to buy things from (and that will maybe even give us missions later on. Who knows?)

There are a few optimizations going on, for instance, to animated building blocks. An intriguing set of commits related to a cloth test, with mention of it being turned into a wearable. And a crane rig module, which I believe will be an addition to the scrap yard and which will allow us to recycle cars, probably in tandem with the shredder I mentioned last week.

The Hapis island rescue attempt is going well, I’m informed, although I don’t have any images for how this looks just yet. And some early work is being put into being able to record camera movements and play them back in sync with demos, which is very good news for people who make cinematics, like me.

Ok, so now a couple of things we have to talk about. as many of you noticed after the change to how deployable items are picked up, it broke the ability to rotate workbenches. Which I know a lot of you liked doing. Well, I hate to be the bearer of news you don’t like. And feel free to leave me a dislike because, of course, it’s all my fault, but that feature isn’t coming back, it seems. From now on, you’ll just have to pick them up and swallow the repair costs. Mostly this ‘feature’ was being used to do things like clipping stuff under them or forcing them into a triangle.. which is far too much fun, so sorry.

And lastly, some of you will have seen this, but the majority probably won’t have. So I’ll fill you in. Earlier this week on Twitter, the bombshell was dropped, that due to performance concerns, work on HDRP is on hold for the foreseeable future. This is different from being canceled, of course, so it’s more of a comma than a full stop. And before you start proclaiming that so much time has been wasted on it. The new art assets that have been created for it, along with other work, are going to be ported over into the current branch, which will significantly sex-up Rust in the foreseeable future.

This includes but is not limited to new cliffs, rocks, trees, many updated textures and maps, foliage, grass, and brushes. Along with work on the movie maker I’ve mentioned before and cinematic tools, plus code for the new asset procgen placement such as cliff generation. So plenty of stuff to be getting on within the meantime. And of course, more time for the TEAM to concentrate on important things, such as. More boats probably. And performance.

Now I’m sure you’ve got some stories to tell me in the comments below, so please let rip with your most intelligent thoughts on this week’s video, and I look forward to reading them. Leave me a like and subscribe to the channel for more of this and other stuff. Come and watch me live on Twitch, follow me on Twitter, Facebook, Discord, and my Steeeeam group to stay up to date with my content, and if you’d like to support the channel, please consider becoming a patron like these amazing people here on the right. All my links are down below and in the description. I shall catch you all soon, but in the meantime, keep calm and stay Rusty.