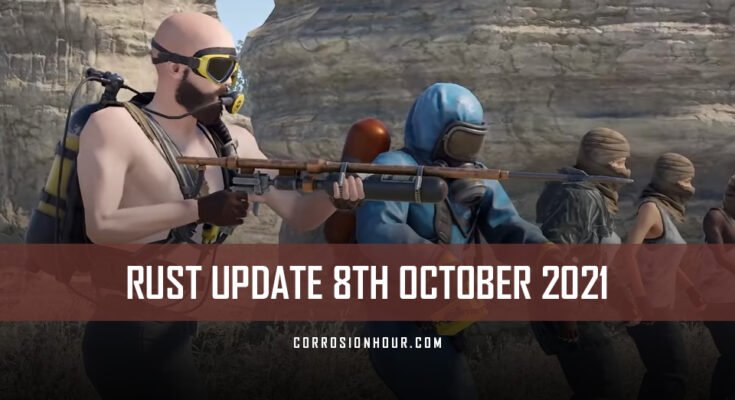 Happy update to all! Yesterday’s  update, the Missions & QoL Update, brought a camper-load of new features and quality of life fixes for players to enjoy. We’ve had reports that horses are pooing more than ever before, and we’re super glad to hear that. RUST artists will note that signs now retain their artwork when picking them up–and you can view their art from within your inventory. Blank signs will now stack up to 5 per stack as well.

For admins, the admin UI panel under the F1 menu has merged in and provides newer admins a simpler approach to basic administrative tasks on their servers. This feature will likely see more updates and options added in the future. As always, if you have questions or need help with your RUST server administration, stop by our discord and we’ll do our best to answer your questions.

Another highlight of this month’s update is the merging of the missions branch. The first iteration of the mission system brings us a handful of single-player / new player style missions intended to be useful in early game and to help fine tune and work out the mission system logic. These mission NPCS are all found in safe zones and can be repeated after a brief lockout timer. We’ve created guides for the 4 mission NPCs that merged into this month’s update:

Consider giving the new missions a try to see what they are about–and earn a new item as a reward.

Greetings, survivors and friends; Shadow here with a roundup of this month’s patch, you know, the one that just happened, plus a first look at the new abandoned desert bases and Rockety McRocketface.

But first! I know a lot of you aren’t subscribed. But why not change that today, and join the ring-a-ding-ding club.

Right! So first, a quick roundup and missions are in now. Whether you like them or not. This is only the first iteration of the mission system, though, and much more is yet to come.

The current ones are just basic fetch quests for basic players, such as finding some lost tackle for a fisherman or a bottle of vodka for someone who likes vodka—maybe hunting a few animules too. But in the future will be expanded to PvP and include capture and hold, delivery, ambush, and eventually bounty hunting missions.

So stick with it; it’ll hopefully get more interesting.

As you’ll know now, hopefully, Rust has a camper module for vehicles as of this patch, which adds a mobile spawn point for up to four players. You can even respawn in it if it’s moving; it also has lockers, storage, and a bbq and costs 175 frags and 125 wood to craft at a t2 workbench—what a time to be alive.

Quality of life was targeted in this patch, too, with a big old list of things to make you feel all warm and happy inside including, signs retaining their art when picked up, taking more time to open doors when crawling, vehicles not sliding off cargo, separate ADS sensitivity, a skin search bar, item counts when picking up stuff, large planter snapping, an auto-fill for code locks, flipping rowboats being easier, a supply drop beacon, and horses now pooing more! Huzzah!

There were quite a few other small ones, and the list has since been repopulated with more, so look forward to having your sexy little lives improved even more in future updates.

OK, so let’s take a look at the abandoned desert bases, which were added for testing to the aux branch on staging just in the last day or so. And I will warn you, these are veeeeeery basic right now, and everything here is extremely SUBJECT TO CHANGE. You know the drill; you’re not stupid. Well, most of you.

Right now, it seems there are 2 of them spawning on a default size map, but that could change; there are some different configurations to keep things spicy, with a variety of tents, shooting ranges, hangars, and general industrial gubbins. Plus a couple of rather antisocial dwellers hanging about.

Everything about them is a bit spartan right now, but as time trundles on, no doubt, the TEAM will add loot, etc., etc.

The main attraction right this instant is Rockety McRocketface, who sits in the middle of the base and looks like he’d really like some proper textures, which I’m sure are on their way.

And before I show you how he works, I’ll say that I’m not sure what the rules will be regarding all this or how hard it will be to actually use, I’m sure some of you will jump to conclusions and tell me how you’re going to stop playing now anyway, but that’s a you problem quite frankly. For the rest of you, it’s probably best to wait and see what the function actually turns out to be.

What I can tell you is that there will be two new items, artillery rockets and aiming modules; the art is a placeholder and SUBJECT TO CHANGE, of course, and I have no idea how you’ll acquire them etc. You can put up to 12 rockets in the launcher, and you’ll also need to insert a new aiming module every time you want to fire.

When the module is in, you’ll be able to choose a target location in a radius on the dashboard map; this is currently more basic than the player map and doesn’t show pins either.

When you’re happy with your choice, you just pull the big lever on the left, and the rest is quite as you would expect. At the moment, these rockets will damage bases.. but as you might remember, so did torpedoes when they were first added, but that was nerfed as predicted, so no use getting your trousers in a knot about it. Although I’m probably bashing my head against a wall saying that.

As far as I’m aware, there is supposed to be some kind of event linked to using this, but right now, I have no idea as to what that entails. Anyway, expect everything about this to change considerably between now and next month, and you won’t be disappointed.

That’s about it for this week’s news. I’ll keep feeding you info as things progress, so leave me a like and a sub, support the channel either directly here with a channel membership, over on my Patreon page, or by grabbing some merch on my store. Follow me on Twitch, Twitter, Facebook, Discord, and my Steeeam group, and I shall catch you all soon, but in the meantime, keep calm and stay Rusty, cheerio.