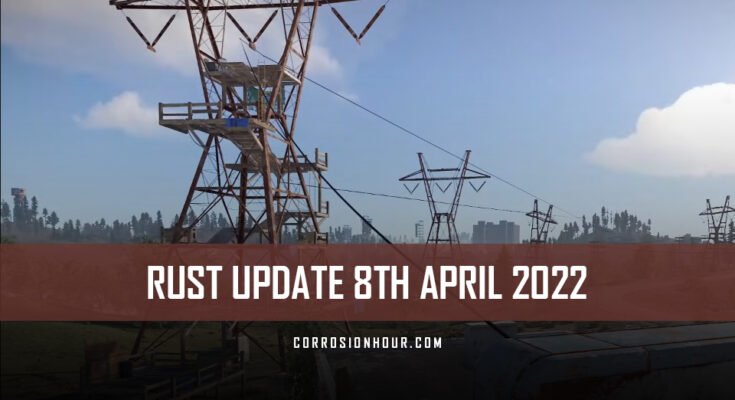 Happy update to all! This month’s RUST update, the Zipline & Rail Update, welcomed the zipline system AND the rail system in one fell swoop.

Those servers running a map of at least 4250 can see a ring-rail system snake around their island. The inclusion of the rail network in this month’s patch is primarily for testing and feedback purposes. There is no gameplay intent for it other than to gather feedback for situations where the rails are generated in not-so-correct places. Be sure to share feedback if the rail network on your server was generated improperly in some places.

Ziplines and their platforms

The other major feature released in this month’s update was the powerline zipline system. For those of you who hate walking, now you can sling yourself from power pole to power pole via zipline powerlines, which they were absolutely designed for and are totally safe. All you’ve got to do to use one is climb up to the platform, look up at the line, and press ‘E’ when prompted to mount. Then off you go!

It’s important to note that you’ll be knocked off if you collide with a solid object while using the zipline. So plan accordingly. And if you were thinking of building obstacles to block the ziplines or prevent people from climbing a power pole, you can’t do either.

Updates in the future will include connections to more monuments and even the potential for players to place their own ziplines!

A handful of new items entered the game

You may have noticed a few new items appeared in yesterday’s update. Dog tags have been patched in and they come in red, blue, and neutral colors. These items are reserved for event use at this time. The landmine got a facelift with a new in-game model. And a new egg suit was added for the upcoming seasonal event.

Upcoming events you should be aware of

Greetings, survivors and friends; Shadowfrax here with a recap on what’s new in this week’s monthly patch to the release branch of Rust and a look at what might come next, and there are quite a few things twitching behind the curtain.

But first of all, to what’s new, and Ziplines – basically hang gliders on rails – have been added, and You’ll find new be-platformed pylons here and there with the aforementioned zip lines attached and these will take you to various places, including straight into some monuments.

Simply clamber up and press E while looking at a line to mount it. It’ll take you three seconds to pick up speed; you can press W to go a bit faster and hold space to dismount before the end at your peril. Just note that you can’t brandish anything while on one as you’re not strong enough to hold on with one hand, and hitting something solid on the way down will knock you off.

I had a lot of people ask if you can build under them, and yes, you can, but of course, this is a double-edged sword as anyone could then get onto your roof. They do have a no-build zone directly around the line, so you can’t block them, you can’t build too close to pylons either, and the mount points for the lines are only available at the pylons, so there is no chance of a personal zipline, however.

According to the TEAM, this is SUBJECT TO CHANGE, and to quote them: “We’ll be improving the generation of these over time to connect more monuments, as well as exploring ways for players to place their own ziplines in the future. “

The rail network is generating now on all good procedural servers over 4250 in size; nothing will spawn on it at the moment, the new trains are still in testing with special Roblox style carriages, and you’re encouraged to report any weird procgen placements with the rail lines for tweaking purposes.

The new work on monument lighting/darkening was merged, with some monuments now being darker at night cos that’s what you wanted and some being lighter, such as the lighthouse (duh) and the arctic base.

The Airfield got the biggest update, it seems, not only lighting but also a number of materials changes and set dressing to bring it up to standard.

The Magnet crane was improved to have a blue light in the cockpit to show when you are facing forward, and holding the Crouch key now auto rotates it back to the front-facing position.

There’s a new landmine model that looks suspiciously like a pie—18 new achievements that are aimed at all the new content that has been added in recent decades.

And new pictures to look at on the loading screen.

Oh yes, and those dog tags I showed you last week seem to be for the Twitch rivals event, which is coming up on April 14th, which is a big old 2-day contest with some substantial prizes for the winners and Twitch drops for everyone else. Incidentally, there’s also now a neutral set of dog tags.

There were a lot of fixes and miscellaneous tweaks this month. Modular cars are now properly supporting the semi-secret mouse steer option again. I believe this is activated by holding crouch when driving; an “Occupied” message no longer shows when looking at vehicle modules with no mount points. Status information on the hud is no longer blocked by helmet overlays.

There was a Fix for Nvidia reflex, causing AMD GPUs to get low fps. Also, one for not being able to kick players out of taxi modules from the driver’s seat. And there were a number of others which you can see a full list of at the bottom of the latest devblog.

As mentioned last week, there’s an oh-so gritty and realistic Egg suit in the works that something tells me you’ll be able to buy next week.

More in-depth official server analytics are taking place in the background. This is to see how you’re playing the game for balancing purposes.

Facepunch is watching you.

According to the devblog, they’ve also updated Steam Networking to the latest version, which comes with a number of important performance improvements. It’s still disabled by default, but tests will be run on various official servers to provide feedback to Valve regarding any potential issues. In the medium term, the hope is to switch all servers to Steam Networking by default.

In works in progress

That PvP update with associated recoil shifts is still being worked on, but no details have surfaced yet, so just carry on with your lives as normal, please.

Modular weapons have resurfaced in the commits, too. It has been a long time since we saw mention of those.

Pets are still being worked on. So is Hapis island. A number of commits to the new building_skins_3 branch. Some more stuff about server transitioning. And very interestingly, a lot of chatter is happening about a new Clans system, which seems to include companion app integration, invites, clan banners and colors, its own UI, and it looks like it has been worked on in secret for a while.

More info on all of these as it emerges in the dueness, of course, of course.

Let me know your thoughts on all the above down below. Leave me a like and sub to the channel, follow me on Twitch, Twitter, Facebook, Discord, and my Steeeam group to stay up to date, and you can support me directly here with channel memberships, on Patreon, or via my merch store, links below. I shall catch you all soon, but in the meantime, keep calm and stay Rusty, cheerio. 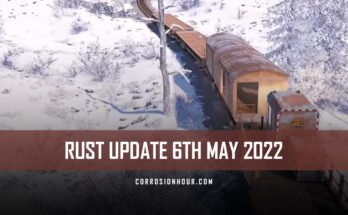