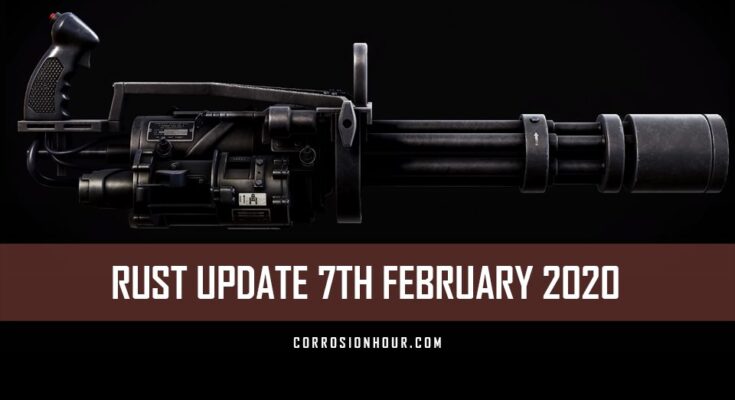 Here are a few of the major highlights from his weekly update:

Greetings, survivors, and friends, Shadow Frax here with your weekly roundup module of RUST development parts where this time we have ring roads, rich presence and miniguns. But first make sure you’re subscribed to the channel for weekly RUST updates and more, and batter the notification bell in case YouTube decides to make it work one day.

It was the big patch to main and forced wipe this week of course and the big news this week was that auto-turrets are now modular! This means that they don’t come with a weapon now, but you can put almost any shooty stick in them from an eoka up to an M249. The only exceptions being bows, crossbows, and flame throwers and sadly no longer rocket and grenade launchers.

(boo) oh or trumpets. shame. That could’ve been fun, a turrrumptet.

You can also use any weapon attachment and any ammo types that you could use if you were holding them yourself, although scopes won’t affect range. Talking of which, it seems their range is fixed and limited to about 10 foundations, regardless of what you stick in them. So thoughts of roof camping the entire island with L96s should be put to rest.

They also need to reload themselves so they’ll have to pause to do that. In answer to a frequently asked question from my last video, no weapons don’t appear to be losing any durability when used on a turret… at the moment. Not sure if this is intended though, so that could change.

You can, however, pick them up off the turret at any time, and use them, at which point they will begin losing health as normal. Along with this change, turrets are now much cheaper with the high qual costs having been dropped to 10 instead of 40 and being 400 only scrap at the compound.

And from the death screen, you’ll notice that now you have a handy and encouraging set of life stats to look at whilst you look at whether or not to bother respawning. And this will give you a round up of such information such as distance traveled, what you did with your time, kill counts and more, with the possibility of even richer info in the future.

Talking of which support has been added for Steam’s rich presence feature this month, which means that your friends will be able to see not just that you’re playing rust, but what you’re doing in it, such as exploring the wilderness (whats left of it), or exploring a monument or just in the menu. Plus if you’re in a team with someone it’ll group you together. Its being kept deliberately vague to avoid the potential griefing, but if you’re really concerned you can just switch the hole feature off with ‘global.richpresence 0’ in console.

In preparation for the modular vehicles update, RUST’s road generation algorithm has been rewritten and visually improved with maps over 3k in size now being given a ring road system instead of the drunken spider aesthetic that we’re used to.

This ring road is a two lane affair, not that anyone’s going to pay attention to such rules when they get behind the wheel. And small roads will now branch off of this to the monuments.

You can’t build on roads now either, so no more toll collections I’m afraid. And smalluments, such as gas stations, warehouses and sperm kets will appear alongside the ring road, rather than by themselves at dead ends, which seems more business savvy, doesn’t it?

Large maps over the standard 4k size have been optimized, again in preparation for vehicles, with the focus being to reduce the object count by making more space between features the larger a map gets. And setting upper limits on monuments and cave placements.

Also, roads and river meshes are culled at a 1000 meters to reduce performance impact, this had led to a 20% reduction in object count on a 5k map apparently and 30% on a 6k!

Hold me down. Yet more optimizations have seen the cost of dressing players reduced up to 30% since December and up to 65% since the October patch. This is a heavy process and one thing that could cause stalls during gameplay so it is good to hopefully see a performance increase here.

RUST’s hit detection code was improved and you can read a bit more about the savings made here in the devblog, but I’d like to know if you’ve seen any performance uptick this patch yourself. Bearing in mind that it will depend a lot on your brand of potato, so leave me a comment down below.

And vehicle parent was also rewritten to provide a more stable experience when using transport helis and hot air balloons amongst other things.

Horse armor costs were reduced this patch with wooden armor costing 300 less wood and roadsign costing 1 less roadsign and 1 less sewing kit.There were also adjustments to research costs and workbench levels. But the main difference was a rider protection increase of 15% and 10% respectively.

And as mentioned last week, the leaning whilst on a horse to grab loot through walls should’ve been fixed now…so my apologies.

In other news there’s now an upper limit to how many fireworks can be set off at once on a server thanks to the efforts of a few brave souls, as the original limit gave everyone the gift of 3 frames per year, if their client hadn’t already crashed.

Sleeping bags outside of cupboard range will now decay faster, this was reduced to 36 hours. The tree minigame was fixed again. We’ve got midi file support for instruments now as mentioned on a previous vid, along with experimental support for MIDI sustain pedals.

There are new server commands for admins this month, such as temporary banning, message of the day, and some new spawn options, and I’ll stick the details of how to use these in the description for you.

Also youll be glad to know that having to manually close RUST with task manager should be a thing of the past now, as apparently this has been fixed and RUST should close almost immediately.

In works in progress, things we’re still waiting for include vehicles of course, HDRP, and more recently, work has started on an overhauled farming system including completely rework plant genetics and a sprinkler setup for watering your crops. So stay tuned for more on these as and when I get it.

What I do have to show you this week and something that I was only able to get images of last night was a new minigun weapon being worked on…which definitely doesn’t look like something player crafted.

I’m not sure on the schedule for this, it may be awhile until it’s in game. It’s pretty unique as far as weapons go, and I’m sorry, but that’s all I can tell you at the moment. Be sure to subscribe to the channel to get more info when it lands.

Lastly, for all of you asking for news on the console release, I have good news, kind of. Although we still don’t have a date, Garry did reply on Twitter last Sunday to say that it won’t be happening in the first half of the year. Which just means you’ve got a bit longer to save up your scrap.

Please, as with everything in this week’s update, let me know what you thought down below in the comments and I’ll read them with a pie and a glass of whisky as per usual.

Please consider supporting me on Patreon like these smashing people on the right, and you can catch me streaming on Twitch three times a week, plus keep up to date with me and my content on Twitter, Facebook, Discord and my Steeeeaaam group.

I shall catch you all soon of course but in the meantime, keep calm and stay RUSTY. Cheerio.