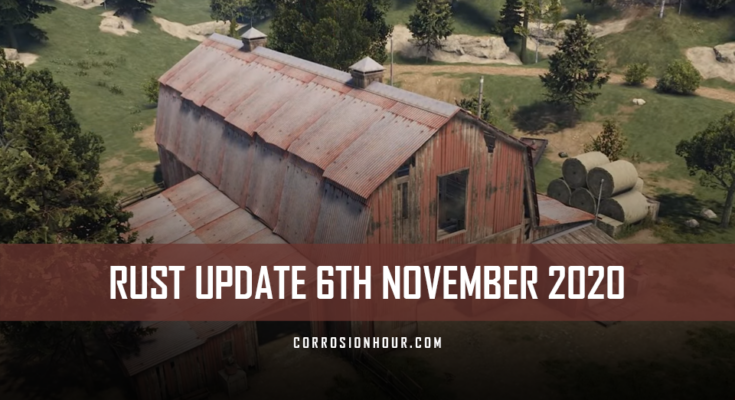 Happy monthly update to all as we round-up the new changes that we saw in this month’s RUST Update. In this update dubbed the ‘Stables Update‘, we said goodbye to the copious wild-but-also-saddled horse population as they were brought indoors. For safety.

Now, players will purchase horses from the stable vendors, as well as any horsy accessories that may be needed. In addition to a roof over their heads, horses have also had a handful of updates that fix the common horse-related bugs–like getting stuck in terrain, periodically killing the rider when dismounting, and regenerating health when eating. Excellent!

We also saw the new phone system introduced with the update. If you thought your base was missing something but you couldn’t quite put your finger on it, maybe a new phone is the answer? Simply give your phone a name and it will show up in the public directory for anyone to dial and say “hi”. If the prank calls become too much, delete your phone’s name to un-list it from the directory.

Greetings survivors and indeed friends, Shadowfrax, here with your weekly development care package containing all of the essential news supplies. Such as some exclusive pictures of progress on the Hapis rescue attempt, the HDRP backport, and this thing on my face here…

But first, according to YouTube’s stats, none of you are subscribed to me, so make sure you correct that straight away. Maybe you could even accidentally brush up against the like button whilst you’re at it. Right, so it’s the beginning of a new month, I think. And therefore, a patch should have just happened, so let’s have a lightning recap on what you can expect to see on your next trip to the world of Rust…

This update was called the ‘stables update,’ and regular viewers will know that this means there are now two stables monuments that should spawn on default servers (vanilla). They are both safe zones, and here you’ll be able to purchase equine accessories and neddies themselves by buying a saddle and choosing a horse in the back. At this precise moment, this will be the only way to get them.

As mentioned previously, a small amount were supposed to be still found in the wild, along with the return of a few rowboats on the beaches. However, due to a bug, this was delayed until December’s patch.

There were, however, some horsey quality of life fixes this time, including geegees not randomly murdering you when dismounting, no longer getting stuck on the terrain, and now regaining health when fed.

If you can’t afford the exorbitant cost of Discord these days, you’ll no doubt want to craft one of Rust’s new phones asap. Or, there are public ones available around the map. A couple of extra notes are that if you give your phone a name, it will appear in the directory for everyone to see. And numbers can also manually be added to the list for speed dialing.

As detailed last week, you can now add Taxi modules to cars, allowing you to pick up random passengers, extract valuables from them and kick them out at any point. Also worth mentioning is that if you put a taxi module on the front of your car, apart from not being able to see where you’re going, you will gain an external trade flap, which could be useful for drive-by transactions.

In order to get players to actually use cars this month, there were also a load of cost reductions to make them more attractive to own, along with a new car parts loot box and a slight overall reduction in engine power.

As forecast, Rust now has weather, which means much more variety visually, wetness at times, and a ton of convars for server owners to play around with. You’ll find a full list of them on this month’s devblog or just pause this screen. Just remember that if you are running any of these from the f1 console, then you need to prefix them with ‘sv,’ or they won’t work.

As well as this, road signs are now harvestable. You can change your view model over to being left-handed with a convar, and storage monitors can now be glued to vending machines. Picture frame glass should be even less dark, and for server owners, the convar ‘server.logoimage’ was added to allow you to specify a URL for a circular server logo for use in the Rust+ app.

More work on the work cart branch and train tracks for us to trundle around on at some point. And a refresh to the supply drop artwork is apparently being undertaken. More on this when I get it.

Ok, so, I have managed to get hold of some details of how the Hapis island rescue attempt is going; this is, of course, the long-needed rework to Rust’s main official non-procedural map, which had deteriorated somewhat and was almost chucked in the recycler.

The entire Northern side of the island is being overhauled and expanded. There’ll now be more flat land along the shore, three ice lakes, and reworked ice on the water. These shots are all going to be from the editor, and I must just say, and so shouldn’t be taken as final.

The launch site is getting a general snow-up and a polish. The NorthWest is having a full facelift, with a refined shoreline, and the junkyard is being fully remade. Caves all over the island are being trimmed, so there’ll be less impenetrable cave bases. The desert in the South is being expanded further West towards the lighthouse, and there’ll be more coastal islands here.

Along with a complete rework to the island’s road system, including plans for some road tunnels here in green, although as with everything, this is all SUBJECT TO CHANGE The HDRP_backport, which involves a load of art assets and textures which were made for the HDRP branch and that are now going to be merged into the current version of the game, is going pretty well.

And here are some recent shots. Just note that it’s a work in progress, and some stuff isn’t converted properly yet, so this isn’t the final product.

As you can see, though, the rock textures, in particular, are looking far superior to what we currently have.

It looks like a few monuments are getting a facelift to go along with this, with a full redo of the satellite dish scene, which will include sewers, and a bit of a change to the sphere tank. I have seen both of these, but I’m going to hold off showing you until they’re more polished. So stay tuned for that.

There’ll also be light changes to the airfield and moderate changes to the military tunnels and sewer branch. And yes, what is this cappuccino stain on the front of my mug?

Well, the TEAM have decided to support Movember this month, a charity that raises awareness of men’s health.. and the way you can do this in-game is to buy the Movember mustache item from the store for $5, whereby 100% of the proceeds will go straight to the Movember charity. SPLENDID!

Alternatively, if you’re able to, you could just push out one of your own. I’m just really sad that I can’t channel Magnum PI By wearing the stache and shades at the same time… cough cough hint.

Join me on Twitch for streams of things, or maybe just head over to my store and buy a SUBJECT TO CHANGE shirt or facemask.. why not. Links will be down below; you can also follow me on Twitter, Facebook, Discord, and my Steeeam group to stay up to date and support me directly by becoming a patron like these chaps here on the right.

I shall catch you all soon, of course, but in the meantime, keep calm and stay Rusty.