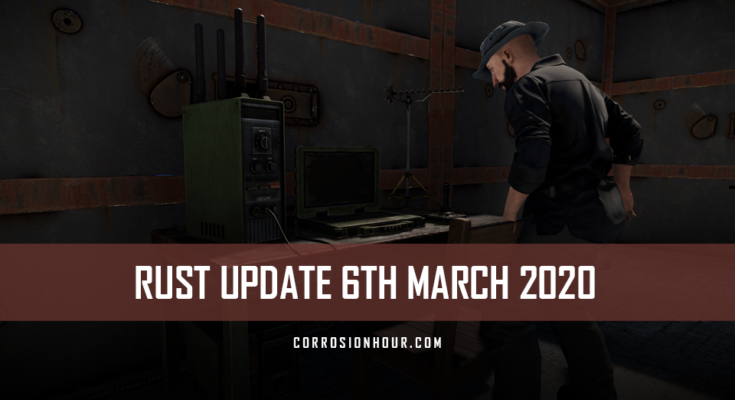 The Official RUST Update has landed this March, and with it, Shadow Frax brings us an in-depth look at all of the new changes in the RUST world. The new CCTV Cameras and Computer Workstations have been released, along with many other miscellaneous changes, including bug and exploit fixes, network/back-end updates, and of course the new oceanlevel admin command. We can expect to see new custom server types and mods to be just around the corner.

Greetings survivors and friends, Shadowfrax here with a full round up of Rust development and everything that went into this week’s patch.. but before I get stuck in, please gallop over the subscribe button and ring the notification gong to stay up to date with weekly Rust news and more!

As you may have seen in my breaking news vid a few days ago.. CCTV was sneakily installed in Rust, right at the end of the month.. and so now as well as being a component for turrets, cameras can also be glued to things and given their own ID.

Simply attach one to a wall inside or outside your base.. and feed it with at least 5 electricity.. You must have authorisation to set its ID, and have a hammer out to change its direction or pick it up.

A camera’s ID can be up to 32 characters long, alphanumeric and case sensitive. But choose a decent one, because anyone who learns it can tune into the camera’s feed without needing authorisation. Unless you want that of course, I mean, some people like being watched.

Also you can only set their direction manually for now, and they’ll point at where you are currently standing when you do so.

Cameras still can’t be crafted, only found, they stack to 64 at the moment but this will likely change. They have 150hp, so taking one offline is within the realms of possibility, or if you get tool cupboard authorisation you can of course pick them up.

Now, you won’t be able to take advantage of any cameras if you don’t have one of these. This is the other end of the bargain, the new computer station, which is needed to view camera feeds.

It’s about the size of a workbench and can either be bought at the compound for 300 scrap or found occasionally in loot.. it costs 75 scrap to research and crafting requires 20 high qual, 1 laptop, 1 broadcaster and a receiver at a level 2 workbench. It has 500hp and can also be picked up with a hammer if you have auth.

Right now it doesn’t need electricity.. although this could change.

To use one, simply mount it, which will put you in the computer, where you can type the IDs of cameras in and add them to the list on the left.. Then just click on each one to view that feed, with sound I might add.

Some things to note here: There are currently no restrictions on distance, so you can be the other side of the map to a camera and it’ll work fine. A single camera’s feed can be viewed from many computer stations at the same time.

And when a camera is being used a light on the front will come on to let you know you’re being watched.. Wonder if we’ll ever be able to use that spraycan I showed last month to temporarily disable them? Now there’s an idea.

Also it appears that there was a small cryptic leak (in quote marks) of IDs relating to Cameras on the oil rigs, sphere tank, bandit camp, scientist compound, and airfield, because yes, you can now tap into these and see exactly when someone’s trying to surreptitiously buy weapons, or secure loot… fat chance of that now.. I’ll leave a list of these camera IDs in the description for you if I’m feeling generous.

Remember: All of these details may change as the month goes on and feedback is received. And as mentioned last week, in future there may be other remote control devices to use with the computer station, including turrets maybe.

Talking of which: Electrical items now show information about themselves in your inventory such as power required and power generated which is very handy

The other new item, kind of.. that you probably know about by now is the Autotrumpet, or Turrrumpet, or Trumpeturret, or Pingu Pistol.

Which basically means you can stick a trumpet in a turret now to create the ultimate alarm system.

It’s only the trumpet that works, so don’t try inserting a piano. And despite what some would have you believe, it’s not pay-to-win thing, you could attach an alarm speaker to a turret and have it do the same, except with a gun if you want.

There were some more map changes this month.. The default size is now 4250 (instead of 4000). No ring roads will generate on maps smaller than 4K because they take up too much space. Road meshes have several LODs now to help with performance.

Roadside monuments, such as petrol stations, warehouses and spermkets can spawn next to both main roads and side roads.. And there are more improvements in the pipeline apparently to get us ready for ‘larger map sizes’, for example to improve the navmesh generation at server start.

There were a box-full of exploit fixes this month.. Including horse leaning exploits, sleeper parenting ones, a seemingly endless amount of scrap transport heli ones.. even more explosive ammo, fire arrow and incendiary rocket exploits, various projectile trajectory exploits, and ones that allowed you to create tool cupboards that belong to external or faraway bases

Plus there’s now logging for when admins spawn things to protect against abuse, and for players, some better messages when not able to build somewhere for some reason..

Also, Shotgun traps now work under the water line in caves. Praise be.

You can now create your own composite keybinds. For example “bind [leftshift+x] kill”, so you have to press two buttons instead of one also meta.add can be used to make binds incremental, so every time you press it you get a step more or less of whatever the variable is. Both of these should hopefully help with people who need a lot of binds.

I’ll leave info on how to use these in the description for you.

A fun thing also for server owners and psychopathic admins you can now type ‘sv env.oceanlevel’ in console, to raise the water level to whatever value you want.. Yay, no way that’ll be abused at all.

You can’t set it to a negative value by the way, it would break things apparently and besides, you can’t drown anyone that way either.. Some things do behave weirdly with this, just to warn you. But it’ll be interesting to see what gets done with it.

Facepunch spent some money and updated their Build server hardware, plus optimisations to the process mean that times for building new versions of the game are reduced, which helps for those ‘WHEN’S WHIP?’ days

Chinese, Japanese and Korean player names on the team dock and item names, should show properly now, as well as some of the options screen and achievements list.

And for server owners, Garry has some good news on the netcode front, see blog for full details, but in brief you can now use Valve’s new IsteamNetworkingSocket system instead of Raknet, which is old and has issues.

Plus in future there’s the possibility to connect via steamID instead of IP address which means No IP addresses will be visible and servers can’t get ddossed apparently. And I’m sure I don’t have to say any more about that.

As mentioned before, we have a ton of new cinematic tools, such as entity parenting, which allows for smooth orbiting of entities and players camera guides for getting things to look just right a demo playback hud and a demo browser.

But you know what, if you’d like to know more abut how to use these and more, why not head over to the new official Rust Wiki.

Which I’ll leave a link to in the description. This will eventually have info on virtually everything in the game, although at the moment just note that it’s a work in progress, so there’s a lot missing.

Talking of works in progress.

Vehicles still trundling along, no idea when we’ll get them still, but there is an armoured module in the works apparently.

HDRP, no idea when that’ll be ready either.

Console version. No idea again, second half of the year at least though. More cinematic tools will be added this month.

There’s optimisation going on to improve, foliage and navmeshes. There’s the MINIGUN of course, which we’ve only seen a model for so far.

An update to the latest version of Unity. And of course, farming 2. which I’ll hazard a guess at coming in April. maybe.. and that will include a sprinkler system, new plant genetics, a planted bottle?

And of course HORSE POO. Which is of course the ultimate fertiliser and hopefully projectile.

But stay tuned and I’ll keep you in the loop on this month’s developments as and when it happens.

Come and follow me on Twitch where I stream 3 times a week.

Support my habits here on Patreon as these smashing chaps on the right are already doing.

Follow me on Twitter, Facebook, Discord and my Steeeeam group to stay up to date with my content, and I shall catch you all soon, but in the meantime, keep calm and stay Rusty.