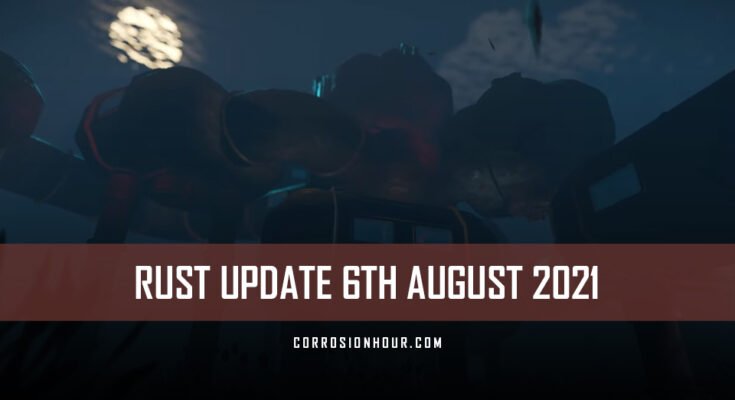 Happy forced wipe to all! This month’s RUST Update: The Underwater Update quite possibly brought us the largest payload of new content that we’ve seen in a long time.  The ocean biome, largely untapped for regular gameplay, has been given a breath of new life.

In one update, RUST has gained an entirely new monument with the underwater labs (also the first of its kind, being entirely procedurally generated), a new mode of player transportation with submarines (also the first vehicle to have its own artillery system), a new resource gathering system with the fishing system, torpedoes, the speargun, and a new force of nature to contend with: sharks.

With so much new content to cover, my goal for this update is to inform you of changes since last week’s coverage. Since the new content went live on the release branch, we’ve learned some further details that we were missing last week. Here’s what we now know:

This month, there are no Twitch drops due to Facepunch switching to an every-two-month model, so that means the next RUST Twitch streamer drops will be in September. As was previously mentioned, the last 24 hours of the drop period will unlock all items to the general category, so viewers with missing drops can tune in to any RUST streamer with drops enabled to earn toward the drop.

Greetings, survivors and friends; Shadowfrax here once more with a round-up of Rust’s new underwater update along with all the important changes that came in at the last minute.

Make sure you’re SUB-scribed.. and join the ring-a-ding-ding club; yeah, I just made that up. Wouldn’t wanna miss any CONTENT, though, would you?

So this Thursday past saw the maiden voyage of Rust’s long-anticipated Underwater update, bringing some much-needed extra ‘depth’ to the ocean environment. No longer is a trip to the seaside about as interesting as filing your tax return in a sensory deprivation tank.

Now the drink contains so much life; it could give a probiotic yogurt a run for its money. Except the yogurt doesn’t usually try to turn your leg into a flute.

For a full rundown of the main selling points from this patch, I’d heartily recommend you watch last week’s update vid because I’m not going to repeat myself all over again. Instead, here I’m going to concentrate more on what has been SUBJECT TO CHANGE since.

First, the water itself is more dynamic. As well as the shoals of non-interact-with-able fish. You’ll notice it becomes darker the deeper you go, and there are other subtle changes, such as the shore wetness effect no longer extending under the water. Underwater explosions are new, and shark bites leave behind clouds of blood.

This project isn’t finished yet, though, and according to the TEAM, you should expect more improvements in the future. But just think how far we’ve come since legacy’s ocean of death liquid. Ahh, memories.

Tune in next month for Rust in space! Haha, JK, Unless…

In the meantime, instead of DS9, we’ve got DSV… And the main pressure to venture where it’s wetter comes from the underwater labs that we looked at last week.

There are less per map now, roughly half as many as at first, with 6 spawning on a default-sized one. Vending machines were removed from them. So no more deep-sea re-tail therapy.

You’ll find mics in some rooms so you can make important station-wide announcements. The dwellers here are now palette-swapped versions of their train-loving cousins, and it’s also worth noting MOUNTABLE TOILETS give 100% comfort; they must be quilted TP…

You’ll notice that the map now has a couple of extra knobs and whistles with a level selector section on the right-hand side, very handy for scoping out the train tunnels and labs without having to physically go there. You can also lock the map to the level you’re looking at.

Submarines were improved upon. The sonar on the duo is functional now, with blips showing the locations of other subs and moonpools.

Moon pools will show up as small red blips but will turn into a big green blip when you’ve lined yourself up just right. “there’s a red thingy moving towards the green thingy. I think we’re the green thingy!”

You don’t have the same luxury in the solo sub, of course, as the interior is minimalist. However, you can now reach the exterior fuel tank from inside if you look behind you. I mean, how does that work? Is your arm really long and thin enough to go through the hatch seal without letting water in, what about the jars of low grade? Ouch, my head hurts; I demand the utmost realism from my reality-bending survival games.

Subs now decay at the same rate as boats. And if they are kept indoors and not in deep water, they won’t decay at all.

You can buy torpedoes from the boat seller at the fishing villages. They can be researched for 75 scrap each and crafted at a level 2 workbench for 1 metal pipe and 30 gunpowder a pop, plus you’ll also find them on the level 2 tech tree at the end just past HV rockets.

When I tested these on stream last week, they were doing enough damage to structures that 4 of them could take out a stone wall. I said that would change, and it did; now they only do about 2 damage to bases.

Back at the large fishing village, just as I predicted last week, a new vendor has opened up here selling diving gear, worms, and fishing rods. Fishing rods are now cheaper to craft anyway, now being just 2 rope instead of 10 as previously.

Plus, when harvesting plants, you will now stand a chance to also pick up worms and grubs, with a double chance of harvesting them from player-planted plants, mmm, a tasty bonus protein snack! However, them’s is rather salty. Again not sure how that works, but, salty grubs.

Along with the new fish mentioned last week, there are now also catfish. Different fish have different conditions for catching, including bait value, water type, water depth, and location. Catfish perch, for instance, are only available in rivers, and orange roughies can only be found in moon pools.

Oh, and junk doesn’t fight back anymore. Because there’s nothing more disconcerting than a skull that’s trying to swim away from you. Well, apart from one that’s swimming towards you, I guess.

After last week’s flying sharks, they now run smoother than a velvet penguin on a Teflon waterslide. Also, for everyone who kept leaving comments like ‘ugh, guess me no go in the water now, all water now too dangerous!’ they only have a chance to spawn around dive sites.. so think of them as being bitier junkpile scientists of the sea.

They now have 100 hp instead of 20, and when killed, can be harvested for raw fish, fat, bone, cloth, and leather.

I do think they should accumulate items from players they kill in their stomachs and become swimming lucky dip loot containers; that would be both fun AND realistic!

A convar related to them that server owners might like to write down is simpleshark. Disable, which should be self-explanatory.

Hey, who you calling simple?

The speargun can’t be used on land anymore. Both the gun and spears are workbench level one items that can be researched for 20 scrap each, and you’ll find them on the level one tech tree just below the kayak.

I see they fixed the spelling mistake on Rustige eggs.

Oh, hi grammar horse, this is correct. And you’re still alive, so does that mean you’ve found another?

You could say it’s ore-ful.

The loot in underwater crates should be a bit better, and they now only take 6 secs to untie instead of 8; wow. Boomboxes don’t decay anymore, which is nice. Small signs can be stuck to deployables. All those wiring QOL improvements I’ve already covered are all in. You can Copy paste phone numbers from the directory.

And beneath the fret transit lines, there are now separate bypass tunnels at stations that can be accessed via these maintenance room doors. There’s no loot down here at the moment, but from now on, this is where workcarts will be spawning. It’s also a handy place to duck into if you’re being pursued, I guess.

The next Twitch drops are in September, they have switched to every other month now, and as mentioned, all streamer drops going forward will switch to being general drops for the last 24 hours of each campaign.

I’ve been asked this definitely more than once or twice recently, and as far as I can tell, it’s still being worked on, but due to being a big task to bring it up to backport standards and the underwater environment being a priority lately, I think that explains the delay and hopefully work will continue on it soon. I’m sorry I can’t give you any better info; I’ll let you know what’s happening (hapissening?) with it when I find out more.

In the meantime, perhaps I can distract you with something shiny? Gravy island/Gravis island, whatever – the winner of the map-making competition – launched on some servers this week. If you want to see what it’s all about, watch my video on it.

Facepunch did pull a sneaky on us and slightly changed the servers it was on at the last minute, much to the chagrin of those who, it turned out, had been farming BPs on the wrong servers.

The map is now running on Facepunch EU Smalls 1, 3, 6, US Small 4, and AU Hapis. Additionally, Rustoria will be hosting 1 EU and 1 US Gravis Island server. As to plans for making it available for the public after this current stint, that’s still TBC as far as I know.

Right, follow me on Twitch for weekly streamage, follow me on Twitter, Facebook, Discord, and my Steeeeam group to stay in the loop on my content and support the channel directly either through Patreon like these fantastic chaps on the right or by grabbing yourself a SUBJECT TO CHANGE mug or something.