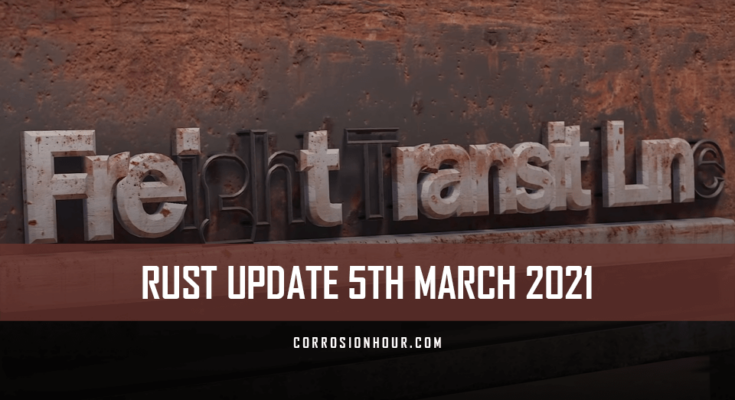 Happy monthly wipe to all! With this month’s update, the Freight Transit Line Update, we are now able to bring the fight for survival below ground into the transit tunnels. Between run-ins with the new Tunnel Dweller NPCs as well as other players, venturing below ground has brought the search for loot to a whole new level. We’d love to know what you think of the new tunnel system so far–join us in Discord and share your thoughts on how you’ve been enjoying the new feature, or how you feel otherwise.

In other news, Round 6 of Twitch Drops has gone live with the update and will continue through March 11th at 7:00 pm UTC.

Greetings survivors and friends, Shadowfrax here with your weekly recycling run of Rust development news, where we’re going deeper than ever before. More skins are dropping on Twitch, and some people are already playing the console version.

But first! Make sure you’re definitely subscribed so I can keep you balanced on the cutting edge of game development.

So, we just had March’s forced wipe, which is called freight transit line, or fret ransit lin, or just FTL, if you’re in a hurry, which could also stand for ‘Faster Than Light’ or ‘Failure To Launch’ depending on your experience. Because now far below your feet, Rust has its own underground train system. In fact, did you know that one of these will now be generated on pretty much any map that spawns monuments? Even as small as 1000, where it’s basically just a budget Hadron Collider. Cute!

For a more detailed breakdown of this new underworld, please see last week’s video, but in brief, you can now descend via a number of entrances around the map into an interconnected train tunnel system inhabited by a new class of hostile NPC, known as tunnel dwellers.

And they really don’t like visitors or want you to have a quick and easy journey around the tracks, bit like the British rail system. A few things have changed since last week, though.

You’ll now find a couple of work carts at each station; there’s now a sexy red version. You’ll also find tunnel dwellers in more places, and their loot has been tweaked, but naturally, this is all still SUBJECT TO CHANGE if it’s determined that you’re enjoying yourself too much.

Above ground at the bandit camp, slots are in, and not a whole lot has changed since I mentioned them last, except now they’re very much cheaper, being only 2 scrap per spin instead of 10, the winning criteria and amounts have been jiggled too, with 1500 scrap being the max payout now and some of the fx are betterer. Now we just need some card games, and I’m sure this’ll be a full house.

Also, it seems that the console beta has been rolled out to a number of players now for stress testing, with more to come later, so some people are actually playing the game on console already. Can you believe, at least now, the spam has switched from ‘when console?’ to ‘gib key for ps4 beta pls’, but if you haven’t got one yet, you can still add yourself to the mailing list and hope. Link will be in the description.

Back to the PC master race version, though, and the server browser has been improved. In short, empty servers are now hidden by default, exceptions being official, friends, history, and favorites tabs. But we can, of course, still choose to show them because sometimes we just want to be alone.

Server tags should look a bit nicer now, too, with more improvements in the pipeline, including a UI refresh, better filtering, and the removal of servers from the list that are spamming, advertising, or generally being dishonest to get ahead.

Server performance should also be better. It seems boats and horses, in particular, were clogging things up a bit with the data they were sending out, and this has been toned down to just when players are around them. It was probably the horses’ revenge for the TEAM clogging them up…

I have a Rust-related sponsor today; a quick message from them. Codefling, *a marketplace for custom plugins, maps, and tools, invites YOU to check out hundreds of free and premium plugins and maps to help your server stand out.* So, go over and have a good look at http://codefling.com; go on, the link’s below.

There were a lot of other changes, many of which I’ve already mentioned, but in summary of the most important ones, the following are all now in the main game.

The oilrig RF spam has been fixed; there’s smoother horse movement over bumpy surfaces; boxes can now be placed under mixing tables; the compound will no longer spawn in the snow on procedural maps, probably because it’s a spawn point on softcore servers now.

Loot will reset in puzzle rooms when the puzzles reset; the skin picker will now show the last skin you used as first in the list for an item. Substations at the side of roads no longer have rads, so happy looting. Dropboxes are easier to deploy on stone walls, the heavy helmet no longer covers the chat, roadsign gloves are now skinnable, and indeed there’s already one on the store.

Healing other players will now properly show an animation in third person, and the marketplace will now charge a fixed fee per order rather than per item, which is a lot thriftier—what a time to be alive.

Also, this week the next round of twitch drops is on; here are the skins on offer, and this will run until next Thurs, the 11th of March.

In works in progress, lots more happening on the HDRP backport, along with the rework to AI, as well as some more commits about reworking the junkyard and adding a shredder, presumably to recycle cars? There’ll be a new convar for admins soon called teleport2death, which will take you back to the scene of your last fatality.

And oh yes, ‘eletrical is being fixed now–why did you have to say about that? Why couldn’t you have just kept slient? Sorry, I spose I shouldn’t say anything about the small, medium, and large ‘rechargable’ batteries either.. well, we know what will be in next week’s update vid don’t we.. check back then to see if the TEAM manage to bust out the dictionary again.

Please let me know what you thought of this patch, leave a like, subscribe, and follow me on Twitch for regular streams of stuff, stay up to date with my content by following me on Twitter, Facebook, Discord, and my steeeeam group. And of course, you can support the channel by buying merch or via my Patreon page. I shall catch you all soon, but in the meantime, keep calm and stay Rusty. Cheerio. 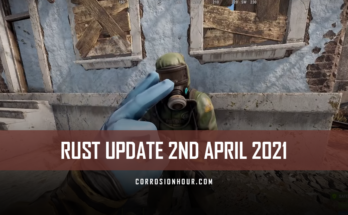