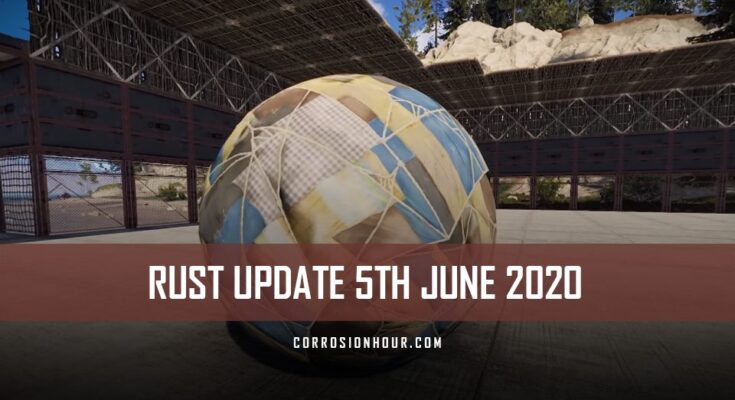 Shadowfrax introduces us to a handful of new and exciting game-changing additions in this monthly update. He quickly covers the all-new Rust+ Companion App, along with a sneak peek of the cars (coming in July 2020), the new ball entity, along with the new additions to Rust’s building 4.0. If you have the time, we highly suggest checking out a recent Twitch stream he held, showing off the new ball entity in a minigame format.

Greetings survivors and friends, Shadowfrax here with a round-up of what was in the big monthly patch this week and a few other nuggets of news. And this update was slightly game-changing.

That is, of course, because of the launch of the Rust+ companion app, which very kindly is free now on App Store and Google play, links below.

A quick break-down of its features.

You can pair it with servers to receive real-time updates on player count, time of day, the whereabouts of online TEAM mates, and get push notifications for when they join the game.

You can view the map and see your TEAM mates, and basically everything you’d see in-game. Communicate with your TEAM remotely with your messages appearing both in the app and in TEAM chat in-game. And connect your smart switches and alarms to the app to enable sending and receiving of signals.

Both of these devices can be paired to your app, and the alarm can be programmed with a custom alert message. The smart switch lets you remotely trigger whatever nefarious devices you’ve set up from outside of the game.

And these can be used like a normal switch too, but with the added benefit of needing building privilege, so are more secure.

There’s a lot of flexibility here to allow you to set up push notifications for whatever you want. But of course, it’s down to you to give yourself a life outside the game. If you remember what that is.

Don’t forget you need to opt in to receive notifications from servers in the Rust+ menu in-game, and one last thing, server owners have to do a little bit of work to get Rust+ working on their servers too, and if this applies to you there’s a page on the Rust wiki with your name on it. Not literally, that would be creepy.

This week also saw the merger of a whole bunker worth of building system additions and tweaks as follows. We have a few new building blocks to experiment with and find exploits with, such as.

Square and triangle spiral stairs, both of which line up with doors. And for the space-conscious amongst you, triangle floor frames, floor grills, and TRIANGLE LADDER HATCHES… So much room for activities!

There are new ramps for cars, which aren’t driving around on the main branch to use with these yet, and won’t be until JULY, also as mentioned last week, new steps that replace the previously used foundation stairs. These are narrower, making them for pedestrian and equestrian traffic only, and must attach to a foundation or floor, but don’t count as foundations themselves.

Lastly, a big update to conditional wall corners, which makes everything look much sexier, plus some updated textures, especially on sheet metal, which is now lined with luxuriant ply (ooh). For some reason, a few people don’t like the new sheet metal textures it seems. But what do you think? Let me know down below.

A very important new feature now. To go along with the new vehicles which are still on staging branch, the TEAM added a very quick and dirty, admin spawnable ball entity which has the hot air balloon texture slapped on it and can be spawned by admins only with spawn ball.entity in console. This really is a revolutionary invention as I found out with my audience on Twitch earlier in the week, and I think we invented a new game with it. I can imagine this could take off. Not sure what I’m going to call it, but I’m thinking SPERMKET LEAGUE sounds good for some reason. Follow me on Twitch, by the way.

I can hear you now, why are they adding useless things like this instead of working on optimization? Shut up. It’s fun.

A few bugs were sorted out with attachments this month to line things up better and prevent them from being offset or clipping. A new button was added which when pressed supplies electricity for 5 seconds.. and that’s it apart from looking tempting to press.

View models are now scaled based on your FOV setting, which should solve some clipping issues at high FOVs but If you prefer the old behaviour you can disable this new scaling by setting graphics.vm_fov_scale to off in the console.

Also, horses will now crap less, they were being too prolific with this, and players were hoarding them to produce dung factories. As you can imagine, this was poo much of a good thing and was sending the stock market potty.

And in works in progress, it seems that animal textures are being worked on this week, and maybe proper fur is being added.

Help an old horse by liking and subscribing, join me on Twitch, Twitter, Facebook, Discord, and my steeeam group for streams and updates on my content and I shall catch you all soon, but in the meantime, keep calm and stay Rusty. Cheerio.