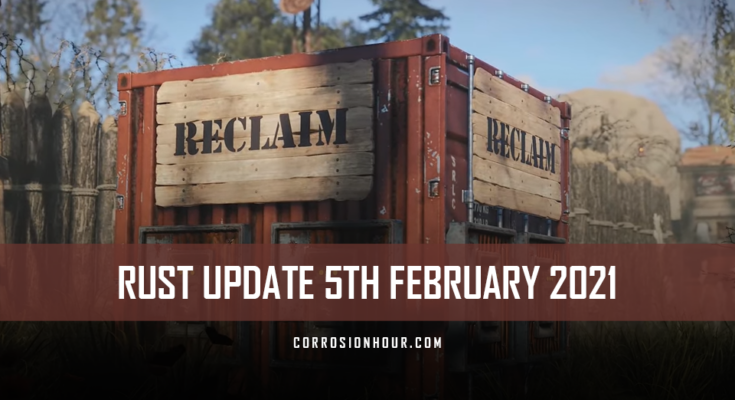 Happy forced wipe to all! It’s a busy time in the world of RUST updates thanks to the release of a handful of features–the first of which the patch was named for, the Softcore Gamemode update, is the first of multiple game modes to be introduced to the game. Another big change is the RUST Marketplace feature, where players can now place orders from within safe zones and await an automated drone to deliver the goods. Players cannot interact with these drones, but it seems a playable version is available to server admins to mess around with. More on that when we have more details.

Server tagging is finally a thing and server owners can add tags into their server configs to aid players in finding the server types that interest them. Additionally, server titles can be cleaned up since those oh-so-important keywords are now provided via the server tags and no longer need to take up valuable title space. It’s quite possible that we may see additional tags become available in the future.

The next round of Twitch Drops is now active on Twitch–this time featuring OG streamers that have been streaming RUST since before it was cool. Be sure to enable drops and check out the great skins available until February 11th at 7 pm UTC.

Greetings survivors and friends, Shadowfrax here delivering your weekly Rust news package and, of course, monthly as well, as we just had a visit from Mr & Mrs forced-wipe, and a few things have changed. Plus, I have some very cool stuff to show and tell later on.

There are lots to clamber through in this vid in the meantime, but first, please leave me a like and subscribe to stay up to date with the cutting edge of development.

To start with, this month sees two big changes. The first of which being a new experimental game-mode called Softcore. Implying that you’ve actually been playing hardcore all these years. But then, you already knew that.

This is an optional server setting that is by no means meant to be a replacement for the ‘normal’ experience, (and it is an experience..), and to start with, there are only going to be ten official servers available with this setting. All others will remain as standard.

Everything about this mode is new and therefore SUBJECT TO CHANGE, but in short, a round-up of its current features are:

On death, a random 50% of your inventory and hot bar can be reclaimed by you – and only you – either where you died in a small stash next to your body, or if it’s more convenient and safer to do so, at one of these new reclaim terminals which can be found at the Bandit Camp and Outpost. The other 50% plus your clothes will remain on your corpse and can be looted by anyone. And of course, your belongings won’t hang around forever in the ‘Rust and found,’ so you’ll have to be quick.

All players will now have the option to respawn at the Bandit camp or Compound as well, providing that they are not currently flagged as hostile.

You can only view the contents of a wounded player, not loot them. And maximum TEAM size is limited to eight as default, which also determines the limit for authorizing on tool cupboards and Turrets. Although server owners can tweak this themselves and Facepunch’s official softcore servers are limited to four.

Now, of course, this is all very new, only applies to softcore servers, and is mainly targeted at the large number of fresh players that have started their adventures recently, so we’ll just have to see how it works out in the wild.

However, I hear that already quite a number of selfless long-time players have been popping onto the softcore servers in order to ‘help new players understand the game’… So that’s nice.

Oh, and talking of which, you’ll notice that new backpack model, which has been in CONCEPT LIMBO for many moons.. is now in the game.. it looks far superior to the old one, love it or hate it, and although still being camouflaged, it does stick out a bit more thanks to the red flower on the side.

For more details about how to use the softcore game mode on your own server and how to tweak it, please see the link to the wiki in the description. Interestingly it also mentions a few other game modes which are currently just placeholder.

The other big change this month is the market place, which I covered the basics of in my previous update vid, but to summarize.

At both the Bandit camp and Outpost, you’ll now find a marketplace with three terminals. From here, if you’re willing to pay the delivery fee, you can place orders with any publicly accessible vending machine or shop on the map. A drone will then pop out of the top and do your shopping.

Nobody but you will be able to access the terminal you used for five minutes, so don’t worry about anyone intercepting your items, and the drone can’t be shot down either (shame we can’t make everything out of the stuff they’re made from.)

You can track your delivery on the map, thanks to the little drone icon. And the distance to the shop – as the drone flies – will, of course, determine how long you have to wait for it to get there and back.

I know what you’re thinking, “can I order boats, helicopters, and horses,” and the answer is No, you can’t, nothing to see here. This isn’t possible under normal circumstances; this is why we can’t have nice things. But we totally should be able to.

Of course, no system is perfect or risk-free, you still have to get your items home from the market place, and when a drone holding a package whizzes overhead, it might just give the local zerg a hint about where to go next. You have been warned.

Let me know what you think about these changes in the comments, please.

This month’s patch also sees not a small amount of quality of life improvements including.

Keylocks autolocking on placement, a new suicide option on the escape menu, turrets auto-reloading whenever a new weapon or ammo is added. And wooden shopfronts are now default blueprints and have been removed from the loot table.

You can place deployables inside watchtowers now, the jackhammer is skinnable and has an admire animation, and talking of which the next round of Twitch drops are here, and these are actually for OG content creators this time. I’ll put a link to the drops page down below for you. I know what you’re thinking, though, but don’t worry.

There were also a few exploit fixes, namely with the small stash. No, not that one. I mean, now, if you place a foundation over the top of a stash, it will just destroy it. So my sincere condolences if that was a favorite of yours, but of course, this means you now can find stashes in the wild more easily with a building plan, some wood, and enough patience. Enjoy!

You can’t go to sleep at puzzles now, well you can, but when they reset, your life will, too. And players who sleep whilst wounded will be killed now, because how could you sleep at a time like that?

The server browser will now show server tags on servers to help you make a more informed choice and know what you’re getting yourself into. These are predefined and include things like wipe schedules and server focus, including MINIGAMES.. these can be set by server owners, and there’s a wiki article about how to do so, which I’ll link in the description down below.

If you were interested in knowing how the game did over the year of January, then there’s a full breakdown on this month’s devblog. Plus, a round-up of how much was raised for charity by the various events that took place during 2020.

And the Hapis island rescue attempt is now playable in its first iteration. It is very much changed compared to what you knew, with virtually everything having been rejigged, a new ring road with mountain tunnels, and things generally being brought up to date. It’s still a work in progress and SUBJECT TO CHANGE, so expect further iterations in the coming months.

Oh, and this mask is now in the item menu. I think we can all guess what it’s for, and by my reckoning, we should eventually get a horse mask in 2026.

Right, it’s time to go over to works in progress, where all the really cool stuff is waiting. And Facepunch artist Tom has been streaming a bit of his work recently, link below.

It seems his current project, straight from CONCEPT LIMBO is a submarine that would make the Beatles very proud indeed, although I don’t think they’d all be able to live in it, it’s only meant to be a two-man.. actually, it’s only Paul & Ringo now sadly so…

Does this mean we’ll be getting some underwater monuments soon? What about that crashed sub? What else will the hunt for Rust October bring? Sharks and harpoons, maybe? Details are very sketchy at the moment, so stay tuned.

Did you know there’s also a spawnable and player usable drone in the game now? Admins can spawn it with ‘spawn drone.deployed’ in the console, you can pick it up and put it down (the icon is just an inner tube at the moment), and to use it, you’ll need to enter ‘NONE’ in a computer station. Shift makes it go up, control makes it go down, and I’m sure you can figure out the rest. It does have a range, though. Exciting times.

And lastly! Not only have we just received drones, but this model is apparently finished in preparation for a function as yet to be revealed. It’s obviously not going to be as spritely as a Boston Dynamics product and looks more likely to be bringing you tea and crumpets in your base than leaping at you and chewing your kneecaps off.

Again this could end up being all sorts of things; perhaps it will pick up items for you from failed raids, for instance. details are thin on the ground, but I’d love to know what you think it will eventually be used for so let me know your thoughts in the comments.

Leave a like and subscribe to the channel, follow me on Twitch, Twitter, Facebook, Discord, and my Steeeeam group; links are below, and thank you to my amazing supporters on Patreon. I shall catch you all very soon, but in the meantime, keep calm and stay Rusty, cheerio.