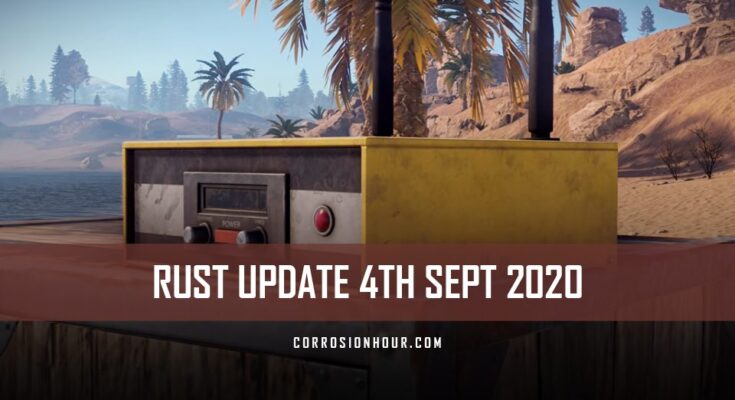 This week we saw the arrival of the Fishing Village in the Boat Vendor Update.  The fishing villages come in large and small varieties and should spawn approximately 3 per default-sized map.  Boats no longer spawn randomly around the game map and will now be purchased from boat vendors for scrap. These same monuments are also where players will be able to purchase and learn-to-craft the new Kayak and Paddle items.  What a nautical treat!

Many performance upgrades landed with this update, most notably the upgrade to Unity 2019! Much work on an entity and gib pooling has been done to improve FPS as well as reduce memory usage. Optimizations for flares, text, and animations have also tacked on some improvement to performance.

Did we mention that workbenches can now be picked up with the hammer?!

Greetings survivors and friends, Shadowfrax here beaming you in the latest news from the world of Rust where this week, because the monthly forced wipe just occurred, we’re going to start off with a roundup. But there’s also some good news on the optimization front. So let’s get stuck in.

Most of what we now have, I’ve already covered, but to recap.

A new craftable aquatic vessel is here. The Kayak–it’s fairly cheap and cheerful, and also requires the possession of a paddle to use. 1 or 2 players can power it, with two being faster, and you can use weapons from either seat.

Paddle forwards with the left and right mouse buttons or A and D, and paddle backward when also holding S.

Not only that, but the paddle can be used on land as a melee or thrown weapon. It would be great if we could use the shovel end to dig stuff up too. Hmmm.

Fishing villages are here as of this patch, too. Three will spawn on a default size map, that’s two small ones and a big one, you’ll find them on Hapis island too. And the vendors seem only to like reggae music.

They’re safe zones, which means no aggressive shenanigans, and this is the only place you’ll now be able to get motorboats and RHIIIBs as they won’t spawn in the wild anymore. They cost 200, and 400 scrap, respectively and the shop also sells kayaks, paddles, and scuba gear.

Apparently, we’ll see more NPC villages like this in the future. Probably meaning that horses will be behind a scrap wall too. Maybe cars as well? Who knows. Also, a mission system is being worked to allow players to get items and bps without just farming scrap, and mission providers will likely be found at these monuments. Oh, how we all love fetch quests. Right? Please tell me how dead Rust is today on a scale of one to respawn down below.

Electrical systems now, and we have a new item, the Storage monitor. I showed this briefly last week, but it now has a model. You can attach it to either a tool cupboard or a large wooden box, and it can be paired with your Rust+ app to remotely show your upkeep and keep tabs on what’s in each container you have one attached to.

You can buy these at the compound for 75 scrap, they can be researched for 75 scrap too and crafted at a level 1 workbench for 3HQ and one tech trash each. They require a small amount of power to work but can also be hooked up to alarms, etc., as they will send out a pulse whenever an item is added or removed.

In other electrical changes, door controllers now have a passthrough, Searchlights are now electrical items, and reactive targets can be powered, although this is optional. They have three outputs and an input, that’s power in, power out, lower, and reset.

Vehicle cockpits now have windscreens, which grant additional protection. Workbenches can finally be picked up, and T2 and T3 models have had their health reduced by 250 each to compensate.. although this feature will be monitored to see how it affects gameplay, so is definitely still SUBJECT TO CHANGE.

A number of quality of life improvements were made to farming. Electric heaters will add warmth to nearby planters to make farming in the cold more viable. The RMB now accesses clone option when looking at a cloneable plant. The water flow system splits evenly between multiple outputs now, and the Max water range has been extended, meaning longer chains of water entities will work, also powered water purifiers will automagically shut off when their output containers become full.

In optimization now and Rust has been upgraded to Unity 2019 LTS (which means long term support), there’s a write up on the devblog about what this means.

Gib pooling was added for everything, which basically means all the little bits that things break into when they are destroyed are recycled into a common pool instead of being created and destroyed each time. Building part gibs are also now using simple shapes to improve perf. This system is twice as fast at spawning objects and uses less memory, which should prevent frame drops, especially when raiding (which is when you really don’t want them).

Other optimizations include Flares being completely overhauled with a lot of the work now being handled by the shader instead of your CPU. And LOD system was added for all of them, and this should add a few FPS for most people in most situations. Also, as a bonus, all light sources will now illuminate the MINIGAME marker on ores at night, not just the miner helmet.

Static animators now have an LOD component too, and a lot of useless animator components were removed, meaning the active animator count has now been reduced by about 200, which can increase performance by a few FPS in some situations.

And a small performance benefit was gained by fixing Unity’s text rendering system, not now having to manage txt that wasn’t being displayed. Every little bit helps.

In addition to this, many small fixes were made, and a number of quality of life improvements include. Painted signs are now appearing in demos (as long as they were already painted when the demo started recording).

Text muting a player will now mute their voice as well. Drinking tea now also hydrates. TEAMmates should now be able to mount newly purchased vehicles in a safe zone, and a new console command, ‘world.rendermap’ will render a high res png of the map that you are currently on, although I don’t think it’s live just yet on staging, at least I haven’t been able to get it to work. But it will be jolly handy when it does.

And now to works in progress, where time is still being put into the Voice props branch, whatever that turns out to be. And the new weather system that’s being worked on looks like it’ll include lightning and storms. Shocking! Let me know in the comments below what you think of this month’s patch and whether you’ve noticed any performance boosts yet.

Leave me a like and sub to the channel, if you enjoyed, and join me on Twitch for weekly streams, and twitter, Facebook, discord, and my steeeeam group to stay updated on my latest content. Thank you to my Patrons for their continued support, and I shall catch you all soon, but in the meantime, keep calm and stay Rusty, cheerio.